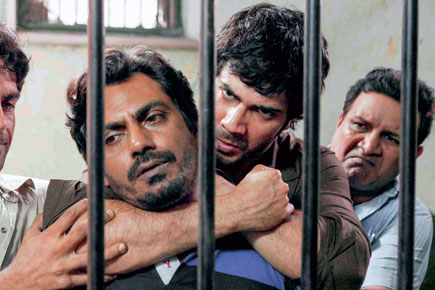 Badlapur is a neatly mounted murder mystery set in Pune that plays on the word ‘badla’ (revenge) and references the town of Badlapur, located between Mumbai and Pune. The story is not remarkable, but the precise ambience of its setting and a clever narrative style holds you to the grim tale.

A skewed bank robbery by two jittery novices destroys a happy little family. There is panic, a gun goes off, and Raghu (Varun Dhawan), an ad man who has just come up with a filched idea for a bra advertisement, is left with his wife and son dead. The film is about deceit and greed—large, small and insignificant—and how the duplicity and covetousness in people around us gnaws into the fabric of our lives and makes us all in some way complicit in human malevolence.

Raghu withdraws into himself and the evil done to him, happenchance though it was, infects his soul and dyes it dark. The first bank robber (Nawazuddin Siddiqui) lies and cheats till he gets out of jail and everyone around him is affected by his lack of scuples. The second robber (Vinay Pathak) reinvents himself as your average successful entrepreneur with a beautiful wife and a lovely home, but the past comes back to haunt his meticulous reconstruction and his wife (Radhika Apte), innocent of his crime, very quickly taints herself with his sin.

So though the film is sometimes gratuitously violent, it manages to retain a moral position. The way it achieves this stance is by cutting a scene when you least expect it, and editing it to absolute contrasts in perspectives. At one point, for example, Raghu, intent on vengeance, has a sudden flashback, and we cut to a scene when he celebrates his wife’s pregnancy and yells: “I did it!”

Above all, the movie has some very natural acting and even the city of Pune manages to come off as an interesting character. In short, a very well-made entertainer.