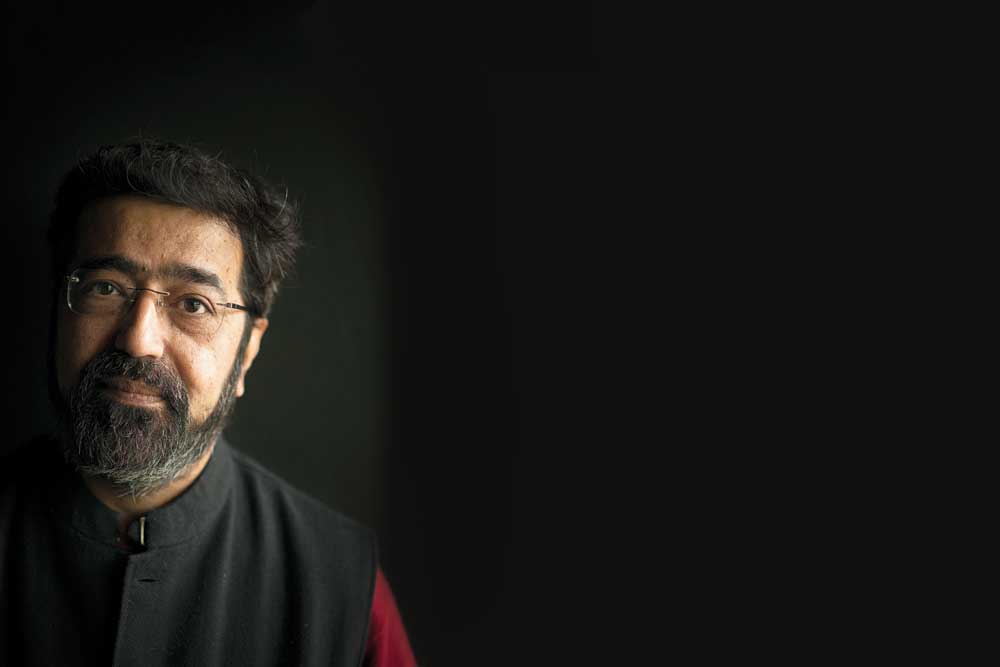 DELHI-BASED filmmaker and artist Amar Kanwar was not present at the Asia premiere of his latest film Such a Morning, at the recently concluded sixth Dharamshala International Film Festival (DIFF). He had to leave for New York at the last minute. But he would have been glad to see the response the film received at DIFF. After the film began, there was the kind of silence that speaks louder than most applause. A film festival is, after all, a kind of liminal space between an art gallery and the full-blown theatre experience: it has the quietude and no-nonsense air of the former while still maintaining the community experience of the latter. A regular at the prestigious art exhibition Documenta, the movie was screened there earlier this year to rave reviews.

Such a Morning is a rare feature film for 53-year-old Kanwar, who made a name as a documentarian initially, in the 90s and early 2000s (his early films explored complex ecological issues, often at the convergence of ‘development politics’ and Leftist activism). And yet, the film contains enough hallmarks to be immediately recognisable as a Kanwar work; the very definition of an auteur. It follows a transitional phase in the life of a mathematician (and occasional poet), who moves into an abandoned railway coach in the middle of what seems to be a forest. He builds a bench for himself (the irony of a professor building a chair rather than being given a Chair) and starts cordoning off windows and other light sources. Slowly, with lingering still-life shots and painterly interplays of light and shadow, the mathematician’s motives become clear: his eyesight is fading, and he is preparing for perpetual darkness— measuring steps between consecutive barriers and waking up to darkness. As the film progresses (filmed and edited by cinematographer Dilip Varma and editor Sameera Jain), it becomes clear that there are several different kinds of darkness that Kanwar wants to explore and introduce to the audience: literal, metaphysical, political, or all of them at once.

Kanwar’s films often eschew dialogue in favour of a running textual commentary. Such a Morning, too, features his signature prose-poetry style, focusing on mood rather than plot progression. As a line from the film says, “There would be no clues, no dates, no information. Just a glance here and a glance there.”

Speaking on the phone, Kanwar explains, “It is a description about the main character. It gently requests/eases the audience to try and shift into another plane of reading or relating to the rest of the film, where it becomes possible to understand but with different senses and methods. Different from data and information, which is what we are used to—and prefer. As you can see there is no data or information in the entire film. No names, no places, no geographies or specific conflicts are identified.”

Kanwar’s language is reminiscent of poets like Charles Simic, who once said, “Words make love on the page like flies in the summer heat and the poet is merely the bemused spectator.” Kanwar’s films use the written word in a way that Simic would approve of—because of the text, Kanwar is more of a ‘spectator’ than he would have been in a feature film with traditional dialogue. Scripted words, despite our best efforts, often reveal their subterfuge when spoken aloud.

Kanwar’s iconic images are a spyglass for today; they shine a light on something ignored or overlooked in plain sight. But his poetry is what prevents the spyglass from being reduced to an unmoored supplier of striking images.

In Kanwar’s celebrated 30-minute film A Season Outside, the filmmaker remarks, in the voiceover, “I have a compass that keeps spinning me into zones of conflict.” A Season Outside was about Kanwar’s attempts “to find answers” that explained all conflicts, not just the ones that had personal or political significance for him, like the 1947 Partition riots (Kanwar explains in the film how Partition “scattered his family across the subcontinent”. As he remarks pithily, “Every victim conceals a warrior”).

An ecological catastrophe has been unfolding on this planet. Many of my films relate to this unfolding reality

The hypnotic power of ritual in our lives is another recurrent Kanwar theme. In A Season Outside, he includes several shots of the changing of the guard at the Wagah border: Indian and Pakistani soldiers go about their business, hands and legs airborne with military grandeur. He notes that without 1947 and the bloodshed therein, this elaborate ritualisation of muscular nationhood would not exist.

In Such A Morning, too, the power of rituals is underlined. As the professor measures his steps with ritual obeisance, the text points out that he is doing so in the only way he knows: co-ordinate geometry, with the values of the x, y and z axes pinpointing his location. Indeed, the film begins with a kind of ode to morning rituals—and based on classical literature, it would be easy to see the ritual nature of the eclipse as an ominous sign. However, Kanwar doesn’t believe that the eclipse is as simplistic as that: “It is true that there is a discomfort that accompanies the eclipse. But minutes before the sun totally disappears there is a beautiful and spectacular natural event that takes place with light, shadows and images. This can often be seen during all eclipses for a few moments. In the film, after this splendour the sun disappears, people keep waiting but the sun doesn’t emerge back again. The rest of the story seems to continue within this zone of darkness. The narrative subsequently traverses many intertwining realities and time zones.”

The professor, meanwhile, is escaping what he sees as a world inextricably tied up with oppressive rituals: the normative trap of living in the city, earning a handsome living, pursuing ritualised romantic love of a very precise ‘heart-warming’ tenor and so on. We are told that the university’s department of department of psychology has declared him ‘incapable of being happy’ and that some have speculated that ‘it was a financial matter’. Notice the insidious wording; by declaring the professor ‘incapable’, the doctors have employed a very subtle knife indeed. The oppressive social structures that hounded the mathematician are not to blame: instead, his ‘capability’ to conform like everyone else is questioned, a classic case of victim-blaming. A man straddling two worlds—mathematics and poetry—is ultimately condemned for not choosing one over the other.

KANWAR SAYS, “THE confusion you refer to is a series of speculations that arise in response to the Professor’s sudden retreat from his work, job, community etcetera. People around him are uncomfortable as they sense his withdrawal, and need a reason that is easy to understand, to mark him with, so that they are satisfied about why he left and so they can then continue to live peacefully. However, none of the speculations seem to feel totally right.”

In the beginning, it is the “cacophony of the crows” that says something unusual is afoot. The text informs us about the crow: ‘They flew with empty eyes and collided with buildings and electric poles.’ This is, at several levels, archetypical Kanwar imagery: a moment of eco-horror, a conflict that’s borne out of traditional forms of knowledge being threatened by all-consuming modernity. On the other hand, Kanwar points out that Such a Morning is not primarily concerned with eco-disaster or the idea of an apocalypse in general.

“At this point in time, seeing what is happening all around us, in India, in Syria, in Myanmar, Tibet, Palestine or Philippines—wherever you look you see an outpouring of hate, violence and a strong systemic institutional support for this increased violence. This seems to be feeding each other towards more and more intense cycles.” He adds, “I did not feel like arguing anymore. And looked now for a metaphysical or more specific – a hallucinatory response to the violence. And so in a way, speaking to anyone, anywhere. This is a film about a possible vision from inside a zone of non-vision, about what could be possible to see from within the heart of darkness. Towards the end of the story, the film presents us astonishingly with a set of clues that may help to live, re- calibrate, respond and resist.”

Ever since he made the shift to making films and video installations intended for the gallery space, Kanwar has used both textual and tactile elements to enhance his works. A prime example is The Sovereign Forest and Other Stories, a sprawling exhibit (in collaboration with Sudhir Pattnaik /Samadrusti and Sherna Dastur) where for the first time, he created objects intended for the outdoors—an opportunity presented to him by the Yorkshire Sculpture Park from October 2013 to February 2014. There were three handmade books to begin with, presented at the centre of a hall, all inlaid with physical objects, all with films being projected onto them. One of these three films was Predictions, made in the 90s, where we see archival footage of Shankar Guha Niyogi, a labour union leader who was assassinated in Bhilai, Chhattisgarh. Before his assassination, the leader made a tape recording where he predicted his own murder, pointed out the names of people most likely to order it, and the motives behind the same. Wall-mounted around the books are 272 varieties of rice.

In a promotional video where he speaks to Clare Lilley, the programme director at YSP, Kanwar explains: “These are 272 varieties of rice that have been developed and grown by Natbar Sadangi, a farmer in Orissa. He’s an old man now but for the last 10-20 years, he has been working in his field, growing them every year, conserving them, archiving them and sharing them with farmers around him within the state of Orissa. Each variety of rice has a purpose. Some are good for less rain, some are good for excessive rain, some can be cooked with meat, some can be cooked with sweets, some are aromatic. Essentially, when you lose a piece of land, you don’t just lose dimensions. When you look at these varieties of rice, I think it perhaps opens a little window in our minds as to what it really means to lose land.”

In the hands of an artist such as Kanwar, even the most mundane objects, words or sounds are his dark materials, from which he spins stories that curve in upon themselves, limitless like a Moebius Strip or the number pi. While the protagonist of Such a Morning could possibly recite the decimals of pi to a few dozen numbers, he’d just as easily write a poem about it. You can almost hear Kanwar adding in his best gentle voiceover tone: “… and that’s okay”.