A pale after-image of Jane Austen’s Emma, it has neither the depth of character nor the dialogue. 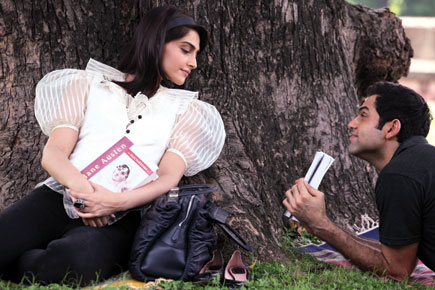 A pale after-image of Jane Austen’s Emma, it has neither the depth of character nor the dialogue.


None of the elevators goes to the top floor in Aisha.  Emotionally, all the characters are stuck on the mezzanine, socially they’re at the  lobby and intellectually they’re in the underground parking. The movie is a celebration of empty-headedness as a value and a declaration that if you don’t flaunt it when you have it then you are either a fool or a country bumpkin.

The film has nothing to do with Emma because despite the criticism of Edward Said when he described the novels of Jane Austen as an endorsement of colonialism, her writing is beautifully balanced on the tension between manners and the strength of  individual personality. Aisha has no manners at all, and as for the persona of Aisha (Sonam Kapoor), it is more lightweight than a single brush of eyeliner.

The bumpkin (behenji) to be given a make-over and turned into a South Delhi space cadet is Shefali  (Puri).  When all attempts to match-make for her by adding a vacuous veneer of her own superficiality onto the earthy girl fail, Aisha is so distressed she decides to fall in love herself.

In the funniest scene in the movie, she barges into a wedding reception at a hotel, grabs the microphone and publicly declares her love for Arjun (Deol). It turns out to be the wrong reception, and half a dozen handsome guys called Arjun put their hands up and say they will reciprocate her love any time.

Meanwhile, Aisha has  rediscovered her soul mate, Pinky (Dubey), a fashion  tsarina with whom she once shopped till they dropped.

Without missing a beat, the leading lady continues on  her cycle of endless ditzy dos, leaving a trail of expensive production values behind her.

Not for a second does the film pause to reflect on the lifestyle depicted or set a moral compass. And what is Abhay Deol doing here, dressed in his Sunday best?