A Tamilian in Bollywood 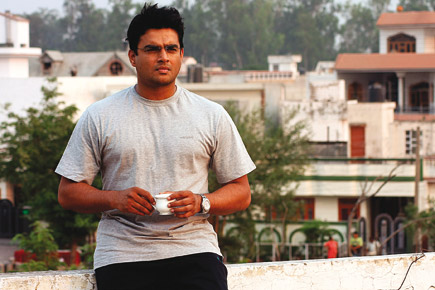 
He searched for a long lost friend in 3 Idiots, died tragically in Rang De Basanti, and has played the hero in Tamil smash hits. Soon, he will play an eligible bachelor in Tanu Weds Manu. R Madhavan, the good boy of Bollywood,  on why he chooses to work in two film industries simultaneously.

Q What is your role in Tanu Weds Manu?

A Most people expect people who return from abroad to be westernised and spoilt. The fact is that 95 per cent of them return to India more Indianised than when they left. Manu is like that. He’s  conservative and listens to his parents. His parents decide he must get married. If you look at Manu, you just know that he will say’ yes’, and agree to the first girl that they show him.

Q On the film’s website, it says Manu ‘has no vices’. Your popular image, too, seems to be like the character you play. Is that accurate?

Q How do you prepare for such roles? Was preparing for this role easier than your role as a student in 3 Idiots?

A 3 Idiots was easier than Manu. There, I had to play a student, and we all remember that life—how a student behaves, what he wants. But with Manu, I really died, yaar. In south Indian movies, I play the hero, and that’s easy to do. A hero stands, behaves and speaks in a certain way. Manu is not a hero. It was very hard to forget all of that and just act like a normal guy. I was very lucky that my director knew exactly what he wanted.

Q Do you have any quirks or superstitions, things you must do before you go on a set?

A No, I don’t. Nothing. The way I see it, 97 out of 100 films flop. This is across industries, Hollywood, Bollywood, Kollywood, anything. And there are such a vast number of reasons why a movie flops that it makes no sense to me to worry about it.

Q This is the first time you’re working with Kangana Ranaut. She’s trying a different role from her previous movies. How do you feel that’s working out?

A I was blown away by her. She was professional and hard-working, all those things you’d expect. What surprised me was the chemistry we shared on screen. You’ll notice it, too. It’s such an unusual couple, na? But it works beautifully.

A Well, I like to stick with romance. It’s actually a very challenging area. Success is rare, and longevity rarer still. It takes a lot of effort for a romantic figure to become iconic.

Q So it’s planned, this niche you have created for yourself?

A Well, I wish I had a choice, but I don’t. I keep getting the same romantic, soft-guy roles.

Q What do you do when you are not doing movies?

A (Laughs) I’m actually on sabbatical right now, but somehow, it always turns out that I am more free when I am working than when I’m not. Shooting takes up some time, but it’s when that work is done that it gets really busy. Dubbing, publicity, events, interviews, there is so much to do; 90 per cent of the time, I am travelling, so I really value my time at home with my family. I play golf. My handicap was 9 under, but it’s now slipped to 14 under.

Q In the South, you are a megastar. In Mumbai, you have to compete with the Khans who rule Bollywood. Why would you do this? Why not concentrate on the South?

A For the love of the work, and variety. Otherwise, it becomes just a job. I work on only one film at a time, and I get to choose better scripts since I have more choice. It’s the best of both worlds. It’s a lot of hard work, but I love it!

Q What was your family’s reaction to your taking up acting, your father being in Tata Steel and mother in Bank of India?

A Well, they wanted me to be an engineer. I didn’t want that. But it’s not like they were forcing me or anything, it was just a question of their concern. When I told them that I was playing an engineering student in 3 Idiots, they were thrilled!

Q You have been stalked recently. What was that like? Was she really crazy, or harmless?

A (Laughs) She was totally harmless. She said her brother was exactly like Manu in Tanu Weds Manu. She wanted to know how I portrayed her brother so exactly, wanted to take a photo with me, and have me speak to her brother. I did that, and then the guards outside my building stopped letting her in.

A That was very flattering. I think the sexiest vegetarians are Amitabh Bachchan, John Abraham, Vidya Balan, Lara Dutta. There are many more…

Q There has been talk about your inability to lose weight, even though you want to. Is it really a problem?

I don’t know where these rumours start. I have no problem losing weight. For the shooting of Guru, I lost a lot of weight in just one month. In the case of 3 Idiots, I broke my leg before it, and that hampered my fitness regime. Otherwise, I have no such problems.