A Story to Believe In

A small budget film with non-professional actors could well be the movie of the year. An interview with director Benh Zeitlin, who brought it to the Mumbai Film Festival 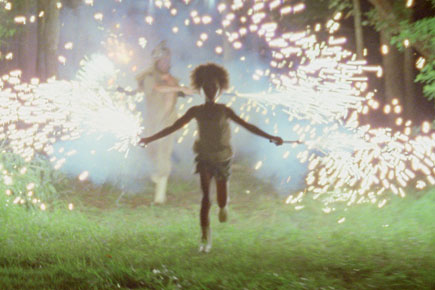 A small budget film with non-professional actors could well be the movie of the year. An interview with director Benh Zeitlin, who brought it to the Mumbai Film Festival


On 23 August 2012, Oprah Winfrey posted a new video on the official YouTube page of her television channel, Oprah Winfrey Network. This is what the world’s best-known talk show host had to say on Super Soul Sunday, her Emmy Award-winning Sunday morning TV show aimed at ‘nourishing the mind, body and soul’ of viewers: “You might be wondering why I would use this platform of Super Soul Sunday to promote a movie, but the movie is that special, it is that good, that when I first saw it, I…I… I couldn’t even… I had to tell everybody about it. I don’t like to namedrop, but the first person to tell me about this movie was the President of the United States. (Pause) Yes, that one.”

She went on to call the movie “emotional, spiritual, a magical realism brought onto the screen and truly a work of art” and recommended it as a “movie for [the] ‘Super Souler’, if ever there was one”.

It’s not just Barack Obama and Winfrey who are under the spell of this independently produced, heartwarming fantasy-drama that was made on an incredibly pint-sized budget of $1.8 million. Time magazine called it ‘magical’, The New York Times said it was ‘a blast of sheer, improbable joy’, Variety hailed it as a ‘stunning debut’ and noted film critic Roger Ebert declared it ‘one of the year’s best—a miraculous film that blindsides you with creative genius’.

After lapping up the Caméra d’Or award at Cannes 2012 and winning the Grand Jury Prize: Dramatic at the 2012 Sundance Film Festival,the movie, Beasts of the Southern Wild, the story of a six-year-old girl and her father in the wake of a Katrina-esque storm, has gone on to win accolades at film festivals across the world as well as the hearts of audiences and critics alike.

The movie premieres in India at the 2012 Mumbai Film Festival, and in between giving interviews to the media all over the world and frantically applying for an India visa at the last moment, director Benh Zeitlin has managed to take out some time to talk about his debut feature, which an online betting website pegs as the fourth most likely movie to win an Oscar this year.

“We never in a million years could have imagined anything like this,” smiles the young director. “The film was not made with famous actors, a big budget, in a popular genre or by well-known producers. It was something we made for the love of it, so the attention has been a complete surprise.”

Benh, who travelled with his movie to film festivals across the globe, says that people from different cultures and regions found their own ways of connecting with it. Some had faced similar natural calamities, while others related to the protagonists’ struggle for survival. But the thing they all unanimously took away from the movie was the importance of home and family.

“The movie never had a political or social message, as much as it did an emotional one,” says Benh. “It was about a feeling, about hope, that even when you have lost something, you are going to be okay. By the end of the movie, a home gets lost, a family member gets lost and a culture gets lost too, but we still feel hope because the little girl in it had the strength to survive it all.”

For someone who turned 30 only last week and was 29 at the time of shooting the film—and who looks about 24 (“People are always surprised to meet me because I look younger than I am”)—this incredible vision and maturity may perhaps be traced to the fact that Benh’s parents are folklorists, academics who study the interaction between lore and the people who use it.

“My parents study many great cultures around the world and have a very democratic view of art,” explains Benh. “They think art exists in everyday communication, in jokes, and in people who try and sell you shirts outside department stores, rather than just in museums. They believe that the highest art exists at the dinner table and in traditions and in something your grandmother makes for you, and this art is just as poetic as that which exists in the work of a Pulitzer Prize-winning Harvard graduate. That sort of understanding has shaped my way of looking at and understanding the world in beautiful ways, and that’s something that will probably be found in all my films.”

It was this unconventional way of looking at the world that first inspired Benh to come up with the script for his movie. Having visited the city of New Orleans in Louisiana as a child, Benh felt haunted by its magnetism and decided to shoot his first short film there in 2008. Glory at Sea, about a bunch of holdouts searching for their lost ones in the post-Katrina debris, made Filmmaker magazine declare him one of its 25 faces of independent cinema to look out for.

The city inspired Benh to such an extent during the shoot that he shifted base to New Orleans from New York soon after, and the charming ways of the city that was catastrophically hit during Hurricane Katrina, leaving thousands dead and many more displaced, became the basis for the story of six-year-old Hushpuppy and her father Wink.

“I have always been amazed at the generosity and hospitality of Louisiana’s people,” Benh says. “Their second line parades, where people follow brass bands just to enjoy the music, or their jazz funerals, which celebrate the life lived, were the starting points of The Bathtub for me.”

‘The Bathtub’, in Beasts of the Southern Wild, is a fictional community of holdouts living on an island surrounded by rising waters—the geography of which was inspired by Isle de Jean Charles, a half-sunk tiny island off the mainland in New Orleans.

“New Orleans has seen so much tragedy but its people are incredibly resilient and refuse to lose hope or leave their home after getting knocked down over and over again,” he continues. “I felt that nobody quite understood what was so special about this place and I wanted to make a film that celebrated this unbelievable spirit of the people.”

Benh recalls an instance when a local had come in for an audition and even though she didn’t land the part, wanted to contribute in some way. Three hours after reading the script, she showed up at the place with a pickup truck filled with a variety of tools and articles that the crew would need to build their set.

It was Benh’s commitment to this never-say-die spirit of the region that made the director cast non-professional actors—Dwight Henry and the five-year-old Quvenzhané Wallis—in the lead, whose tour-de-force performances have them tipped for Oscar nominations. The two are just about as perfectly cast as could be. While it was Quvenzhané’s beyond-her-years wisdom and emotional range that won her the part of Hushpuppy, Henry was a baker whose real-life story of resilience in the aftermath of Katrina, where he was submerged in neck-deep water, was similar to that of Wink.

All these elements came together in a continuously evolving script that Benh “was never sure was perfect”, but one that viewers, especially those from Louisiana, have loved. “I’m probably happiest about the fact that the people of New Orleans are proud of the film that represents their heroism in every way.”

Hollywood has also stood up and taken notice of this beast of a movie, and, as is convention, has already started offering Benh a dime-a-dozen big-budget films for direction. But Benh, who counts among his inspirations mainstream Steven Spielberg movies and even Hindi films like Lagaan, Deewar, Sholay and Dilwale Dulhaniya Le Jayenge, has refused to bite so far.

“I would love to have more money to make films and not be as hungry and desperate while we are making it,” he explains, with a laugh, “but I’m very committed to making films exactly the way I do. So even if I had all the money to make a movie, they’d still be similar to Beasts. Because, ultimately, I didn’t come here to work with the [big film] studios, I came here to tell stories that I believe in.”