A Kiwi in Bollywood

Mike McCleary’s scores for Shanghai and Shaitaan spotlight the work of a man who barely understands Hindi and usually works blind, without a script 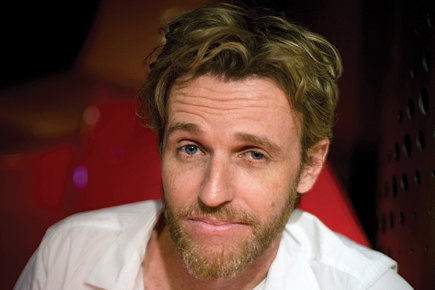 Mike McCleary’s scores for Shanghai and Shaitaan spotlight the work of a man who barely understands Hindi and usually works blind, without a script


In early February this year, an eight-member brass band from Thane called Prince Music entered a recording studio for their first time. Like most brass bands, Prince Music is usually employed to play at weddings and festive occasions. But this time, as they entered Ribbit Studios, a fancy recording studio which neighbours the Lower Parel pub Blue Frog, they had a different task at hand. They had to make music for a Bollywood film.

While such a band’s music might have been used in Hindi films before, it is normally only used in scenes where there is a wedding or a festival like Ganapati Visarjan. No one, as the composer of Shanghai’s score tells us, had ever tried to use it as a background score for a film. However, in Shanghai, for which the band provided the background score, tinged with a bit of electronic music, all nine tracks that run through the film have Prince’s music, especially that of the drummers, as a central theme.

Perhaps even more interesting than the tale of this ‘experiment’ is the story of the background score’s composer. He is a little-known New Zealander in India who, having studied orchestra and jazz music in London, is now slowly finding his feet in the Hindi film industry. Mikey McCleary, the 43-year-old music producer, composer and multi-instrumentalist who calls himself a “jack-off-all-trades sort of musician”, has already worked with a number of industry stalwarts like Lucky Ali, AR Rahman, Vishal-Shekhar, Pritam and others, producing and composing music for them, apart from producing the music of a number of television commercials and his own music album.

“It was crazy,” says McCleary, recalling the recording session with the brass band, “The drummers were just so loud. They weren’t used to recording in a studio, and I hadn’t ever dealt with street drummers. Sometimes the drums were so loud, they had difficulty maintaining beats.” According to the composer, the players wore click tracks—headphones used by musicians that provide a clicking sound, thereby allowing them to maintain the beats of a song—but were so loud that they were unable to hear the clicks. “Eventually it worked out and turned out rather well,” he adds.

Unusually, McCleary composed the score “blind”. Neither was he given a script narration, nor allowed to see the film. All he knew was that the film was a political thriller. The director of the film had suggested that he use the rhythms of street drums to develop dark ambient music pieces that evoked various emotions like despair, courage, hope and other general feelings within the graph of the film. “What this allowed me was to come up with a score that could stand on its own, and which would not be overshadowed by the film. What mostly happens with scores in Bollywood is that they are not treated with respect. They are used to prompt the audience to what they should feel at that specific point in the film. It’s like holding a placard that reads, ‘Cry now’, ‘Laugh now’, ‘Be happy now’,” he says.

McCleary is still learning Hindi and does not often understand the lines in many of the songs he deals with. He was introduced to Hindi music very late in his career. The son of an academic who started a theological centre in Bangalore, he was born in Chennai and continued to live in India for six years, after which he returned to New Zealand and later England. He studied jazz and orchestra music in London and had never really been introduced to Hindi music. It was later, when he was working with London’s famous Trident Studios, that he got his first orientation.

Lucky Ali was in the city to record an album that never materialised. Unknown to McCleary, Ali had married his sister Meaghan Jane McCleary. “He just knocked on the door, came in, and introduced himself as my brother-in-law. The next thing we knew, we were making songs over a weekend,” says McCleary. Over that weekend, the two created two songs—Oh Sanam and Sunoh. McCleary remembers those days fondly: “It was just so exciting. I was trying my hand at something entirely new and different.” When Ali later returned to London, he had an album contract. In less than a month, all the songs were ready. Sunoh, the album, went on to become a big hit and is still considered a landmark in the Indi-pop scene.

McCleary then went on to produce all of Ali’s albums, and over the years also worked with AR Rahman, including on a song for the Aishwarya Rai-Bachchan-starrer Provoked. After he realised that he was getting plenty of offers in India, the musician moved to Mumbai five years ago.

While the composer does a lot of work with films, he earns what he calls his “bread and butter” from advertisement jingles. He has produced, written and composed a number of TV commercials, some of the most popular ones being those for Levi’s Curve ID jeans, Vodafone and Coca-Cola. “Music for advertisements is such a mad, mad, mad world. On most occasions, I am briefed about the ad in the morning, and by nightfall, I need to have completed the music—which will involve writing and composing the music, apart from getting someone to sing it. But it helps a musician understand his instinct better,” he says.

Working on some of those commercials also helped him discover new music. The composer was introduced to Hindi music from the 1970s when he composed the music for a Coca-Cola commercial that was directed by Dibakar Banerjee. The advertisement, which featured Imran Khan and Kalki Koechlin, used a new version of the 1973 song Tum Jo Mil Gaye Ho. Later, McCleary turned to the music of another song from that era, Aaj Ki Raat, for another Coke commercial. “The songs from that era are something else, aren’t they? I started listening to more songs from that era and even became a huge fan of Geeta Dutt’s voice,” the composer says, talking about how this resulted in the 2011 album Bartender. The album is a reworking of a number of vintage film songs from the 1950s to the 1970s that have been given a jazzy flavour. McCleary is now working on a sequel to Bartender. “For me, music from that era is completely new. Working on some of [the songs] is like venturing into a sacred land. But what I’m looking at is simply giving some of these songs a contemporary touch,” he says.

When Shaitaan director Bejoy Nambiar learnt that McCleary was working on such an album, he got McCleary to share the song Khoya Khoya Chand with the film. “He wanted a song for an action sequence where everyone is shooting each other. We played all the tracks against the scene. But what really worked was Khoya Khoya… It was as though it was made for the scene,” McCleary says. Not just that, McCleary also remade another old Hindi film track for the film, Hawa Hawai. Both these tracks garnered a lot of praise.

The composer is now turning music director with an untitled film for director Rohan Sippy. When we meet him in his studio, he is well turned out in an untucked white shirt and denims. However, his eyes look weary and even the laces of his shoes are undone. He is in the midst of putting finishing touches on one of the songs in the film. Although unwilling to let us listen to the music for contractual reasons, he describes the music of the film as upbeat, with a strong Reggae and Ska flavour. Yet, as he turns music director, it will result in a strange anomaly—a music director who is only partially comfortable with Hindi.

McCleary has a unique manner of working with music. According to him, he likes to compose music and melody in isolation, without being influenced by the lyrics of the song or scene in the film. “Of course, a customary knowledge is important. But one needs to focus on the music itself, without making it secondary to the vocals or a scene in the film. I think this way I can create superior music,” he says.

According to the composer, this is an exciting time to be making music for Hindi films, even for outsiders like him, because film directors are venturing forth to experiment in their films and their music. “There is a strong urban crowd that has a developed taste in music and directors want to cater to that by creating something new. That’s where someone like me comes in, who is still a little new to the whole industry and has different music sensibilities,” McCleary says.

But as the musician moves on to bigger things, he wants to complete a small project that he has had his heart set on for quite a while. “I have been nurturing this idea for years. I want to do a whole album of popular jingles and songs that I have worked with in commercials. I want to do full-length versions of these songs, and release it as soon as possible,” he says.

“What do you think I should call it?” he asks, before supplying the answer himself: “Mikey and The Jingles.”