Intimacy Coordinators, who play the bridge between actors and directors, are changing the definition of safety and consent during shoots 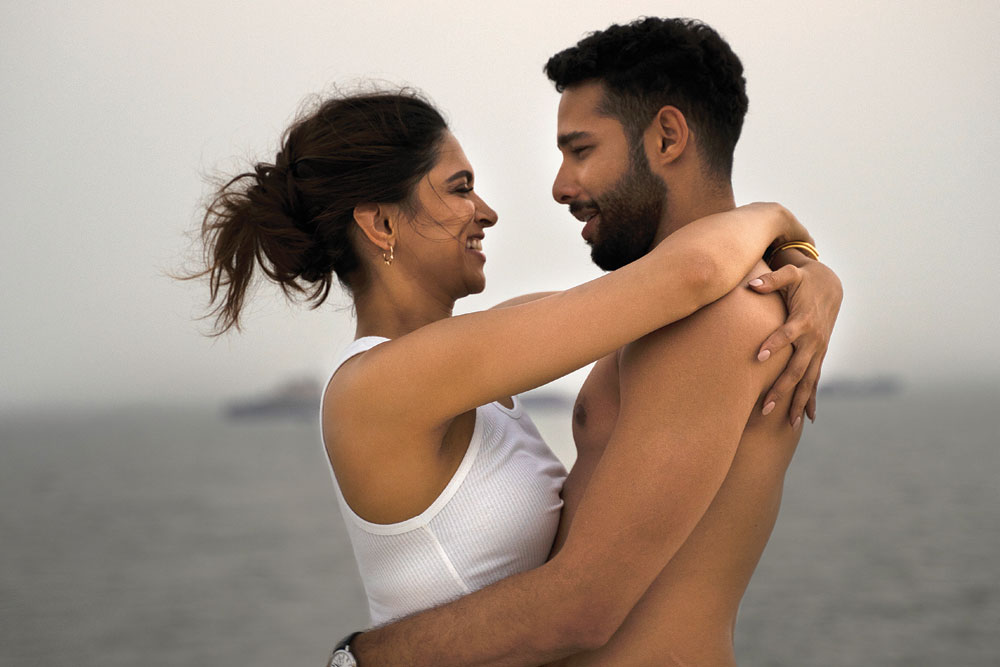 A scene from Gehraiyaan


IMAGINE A DIMLY lit film set. An intimate scene is being shot between a young girl and a boy. They start exploring each other’s faces, arms, upper chest, chest. Pause. The girl feels uncomfortable, but the director is yet to call, “Cut.” She doesn’t say anything and continues to shoot. The scene ends and she carries that feeling back home. She feels a mixture of guilt and confusion. “Why didn’t I say something?” she asks herself, but has no answers. The trauma of that experience lives with her, forever.

The above scenario is one where intimacy is essential to the film, but the actor is disturbed by what transpires on set. Now imagine if there was a professional on set that the actor could turn to, to express her discomfort. A professional who would help choreograph the scene in a way that she feels no threat, and yet the director achieves what he had visualised for the scene.

A new breed of professionals on Indian film sets, called Intimacy Coordinators (ICs), are changing the definition of safety and comfort for those working in the movies. Ever since the MeToo movement in India, there have been conversations around creating safe spaces for working professionals on film sets. During the movement, many were accused, ostracised, shamed for indulging in various forms of abuse against their colleagues, but no rules were laid down to combat this on a working film set. People were reminded of the PoSH guidelines, and a women’s collective from Kerala even laid down the need for sexual harassment panels on sets. However, performers on set were still responsible for their own safety and no external force empowered them to feel protected in their work environment.


But a handful of film persons are taking an initiative to change this at the individual and collective level. Aastha Khanna and Neha Vyaso have trained as Intimacy Coordinators. Which means they only come into play for scenes that involve physical and emotional intimacy—be it consensual or non-consensual on screen.

Many directors are now reaching out to these women, who are pioneering Intimacy Coordinators in India.

Director Shakun Batra’s recently released Gehraiyaan highlighted the role of an IC and many others from R Balki to Homi Adajania to Zoya Akhtar have followed suit. “My job entails three main things—upholding the consent of the performers, using the information that we have to help the director realise his vision, and trying to prevent any kind of mishaps, lawsuits or undue delays on set. I’d say the job really is to negotiate with the director on what his vision is, versus what the actors are willing to give,” says Khanna who is an Assistant Director turned IC and has already worked on 12 films as an IC, including Gehraiyaan.

An IC also takes on the responsibility of protecting an actor from any physical or emotional trauma. She acts as a trusted colleague to both the performers and the director, almost like a bridge between the two. Through workshopping, creating a closed set, and providing a secure environment for actors to deliver an intimate scene, the IC ensures that artists play within defined boundaries. “I always promise a brave space instead of a safe space. I always say to actors that while I’m on set, ‘You have a voice.’ Nobody is going to question you if you turn around and say, ‘I need to understand this scene better,’ or ‘I’m not feeling comfortable with something.’ All of those conversations I would help facilitate. But can I promise that in a room of 30 people you are going to be completely safe, there is absolutely no parameter that is out of my control, that is a promise I cannot make,” Khanna emphasises.

For Neha Vyaso who is an actor herself, and currently finishing her IDC (Intimacy Director Certification) in New York, the conversation starts with educating performers about consent. Vyaso who’s also worked on a short film called Closure that revolves around consent, believes that the more you know your bodies, the more you will be comfortable entrusting your bodies to another individual.

“A large part of our work involves making actors understand their own bodies and what consent means to them. Some actors don’t like being touched on their faces, but touching their arms is okay. A hug is fine, but lingering on for too long is not. In India, actors are taught to perform without any boundaries; they are told that they are props for the director, which is wrong. Indian actors need to start treating their bodies like instruments. If a musician plays a broken guitar, no matter how great they are, they can’t play it. Similarly, if you are not feeling whole in your heart as an actor, the camera catches all that. This is probably why in India we don’t have great examples of scenes of intimacy in the past, which breaks my heart, because we are literally the land of the Kamasutra,” says Vyaso.

For both Khanna and Vyaso, the motivation to learn more about this profession came from a personal space. Khanna was battling the paradox of studying cinema in the UK where she was encouraged to ask questions about sexuality and pleasure, versus Bollywood, where there has always been a prudishness around displaying sex. Vyaso, on the other hand, was acting in a film about a young housewife coming to terms with her idea of desire, but felt deeply uncomfortable shooting it. “I went back to my days at Prague Shake­speare Company where I was first intro­duced to the idea of an intimacy coordi­nator. At that time, I remember playing an assaulter in a play and how it left an impact on me that we could tell the story without flouting anyone’s boundaries. I was producing another film where there was a child involved and he wasn’t comfortable hug­ging people. The mother was like, ‘It’s ok, make him do it.’ These small incidents started collecting in my head and I started with educating myself to have a better understanding of human interactions and physical touch,” says Vyaso.

The job of the IC is to make the actor feel comfortable in a scene that requires physical and emotional vulnerability. So, the ICs were even more hands-on in recent shows like The Fame Game and films like Cobalt Blue that involved primary charac­ters playing homosexual parts. “Heteronormativity comes into play for ho­mosexual or non-binary scenes, that’s where my training comes into play. If something that’s required of me is out of my depth, I have a resource bank of people, who will tell me how to choreograph a scene with gay people and what I can do differently to not make it heteronormative. I have people who have deep dived into these particular specialties in order to make it more au­thentic. There is also that aspect of me being aware of my gaze and constantly informing the director if the story line feels inauthentic to the character, or if it is looking heteronormative,” adds Khanna.

These conversations are relatively new for the Indian film community. For decades now female actors have depended on their mothers or female make-up artists or female assistants to feel protected during an intimate scene. For directors too it’s a big step towards honest and responsible filmmaking. “I think it was long overdue and it completely changes the dynamics for an actor and director to have an IC on set. They don’t need to second-guess the scene or what’s going to happen and they can just concentrate on performance. There’s intimacy clothing pro­vided in case it’s needed and there is a whole line of communication that’s open for the actors in case they don’t feel comfort­able sharing something with the director. With an IC there is a sense of authenticity, research, and it’s just overall a much more professional environment,” says Adajania who has used an IC on the sets of his first web series Saas, Bahu aur Cocaine (working title).

Actor Shreya Dhanwanthary who has worked with both Khanna and Vyaso in R Balki’s Chup and Sabbir Khan’s Adbhut asks that if action on set isn’t expected to be improvised, why in­timacy? “During an action sequence we don’t expect the actor to throw an extra punch, right? So then how is an extra hug or kiss okay during a sex scene? When intimate scenes are choreo­graphed it’s so much better and clearer. Aastha always had a visual reference of how the shots would look, she had an arsenal of tools that we could use, they gave two different approaches for two different co-actors, they would always make sure that any unwanted foot­age from set is deleted. It’s so cool that you can speak to someone about your boundaries without worrying about offending someone or a co-actor’s ego. It’s the best thing that’s happened within the industry in a long time,” she says.

Intimacy on screen goes beyond just consensual sex. Scenes of sexual violence that are a frequent occurrence in our films and shows urgently need the presence and guidance of an IC. Drama therapist Anupriya Banerjee grew into the role of an IC for a recent short film Churiyan around child traf­ficking. She found a balance between her training as a therapist, and her need to make the children in the film aware of physical violence on screen. “During workshops, I used bubbles with the kids for action sequences where I had to prepare them for reaction time. The action was between the perpetrator and the girls and the challenge was about how to prepare their bodies for the scene without traumatising them. After the film was over, we de-rolled. De-rolling is being able to transition from the reality that’s being created on screen, back to your reality. We punched and hit an imaginary antagonist, which was essentially discharging any anger or fear they felt in the body of their character. I checked in with them days after shoot, so they are not holding onto any of the experiences on shoot, and I’d ask them to shake it off in case they were feeling any discomfort,” she says.

ICs are also helping artists expand their idea of morality and break away from conditioning. “Why can’t we find joy in sex, there is so much joy in sex and intimacy and I am just amazed why we don’t find it, why we shy away from talking about it,” says Vyaso. The ICs hope that in the future, they’ll be able to expand their ambit further. “Eventually, I feel like there won’t be an Intimacy Coordinator on set. I wish a day would come where we are all attuned and aware of boundaries and you don’t need a third person to negotiate the most basic things. I feel the day I don’t get a job, not because people are not creating intimacy on screen, but because they are all empowered and empowering others, will be a good day,” says Khanna.