A comedy about match fixing tries hard to deliver, but slips between jokes. Why is fun so difficult? And why is Cyrus such a bore? 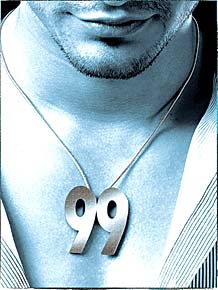 A comedy about match fixing tries hard to deliver, but slips between jokes. Why is fun so difficult? And why is Cyrus such a bore?


The title 99 refers to a date and not a cricket score. This was a fascinating period in the cricket season of 1999-2000, when match-fixing was a reality. It tells of two small-time operators in Mumbai (Cyrus Broacha and Kunal Khemu) who are into SIM card duplication (mobile phones had just become big then) before they are psyched by a bookie (Mahesh Manjrekar) into flying to Delhi to recover his dues. The bookie refuses to go himself because, he says, the taxis in Delhi have no meters, a sure sign of a city of crooks.

Not that Cyrus and Kunal like Delhi. Their tapori Hindi foxes the Haryanvis; the taxis are all Ambassadors which drive you round and round beautifully designed circles and bring you back to the same place; and the recovery style for dues, which in Mumbai is largely linguistic with many references to the khopri of the debtor being turned into kachumber, in Delhi is vulgar and almost instantly physical.

But there are compensations. One is a smooth-talking and charming compulsive gambler (Boman Irani), the other is a suave match-fixer (Vinod Khanna) and the third is the very pretty floor manager (Soha Ali Khan) of the hotel the duo are staying in.

But 99 is only intermittently funny. It’s like an Ambassador driven by a nervous wreck—it lurches forward, stalls, starts and then speeds ahead as if on auto-drive. There are moments that leave you in splits and then about 20 minutes of a dull documentary on New Delhi.

What is interesting is the way Mumbai and Delhi have been shot. They have an unrealistic, non-polluted look. No slums, no poverty. But for fans of Cyrus Broacha, 99 is a disappointment. The other ‘Bawa’ in the film, Boman Irani, is unusually subdued as well.

When a film has two directors, Krishna DK and Raj Nidimoru in this case, it has two minds. Like the birth of a kitten with two heads. One meows while the other sips milk.