Zoya Akhtar: The soothsayer of affluence

With her latest release, Zoya Akhtar reclaims her space as the storyteller of poor little rich people 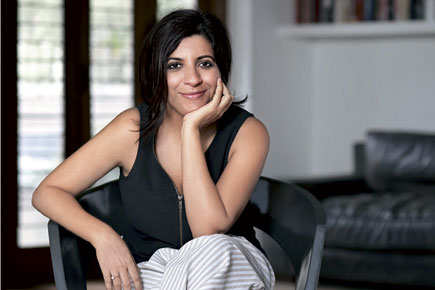 When Zoya Akhtar chose to start her directorial career with a satire on Bollywood, many warned her not to go there. Most actors refused to sign her film and producers did not want to invest in it. After a seven-year- struggle, she managed to put Luck By Chance (2009) on the floors, and once it was out, Akhtar immediately became the fresh and fierce new voice from the world of Hindi cinema. Her style of storytelling was unpretentious and gutsy, and she was not afraid to laugh at the world she belonged to. The film did not make much money, but it still finds frequent mention in conversations about Hindi cinema’s off-beaten track. This is perhaps why, even six years down the line, she finds herself defending her latest work from comparisons with her debut film. “I am not here to break any mould,” she says sharply, “I just tell stories I feel like telling at that point of time.”

Sitting in her Khar office in Mumbai, munching on the season’s freshest cherries, Akhtar is still reeling in the reactions to her newest release Dil Dhadakne Do (DDD). Swirling on her chair, dressed in muted-coloured clothes, sporting her trademark unruly hair, she looks confident and quite like the boss of herself. She’s just back from a bunch of city tours for promotions, but the energy around the film keeps her on her toes. The star-studded family drama has invited mixed responses that have an almost ‘love it, hate it, but you cannot ignore it’ kind of vibe. The film has worked for some, and hasn’t for others. It comes on the tail of two winning movies, Piku and Tanu Weds Manu Returns. But it has not received the kind of response one would expect of a movie with some of the biggest film stars of this generation. Some are calling her the next Karan Johar simply because she chose to tell the tale of an affluent family, but it doesn’t affect Akhtar in the least. “I have wanted to make a family drama for a while now and I wanted to tell a story with siblings at the core of it,” she says. “I grew up watching family films like Terms of Endearment and Khatta Meetha. The point is: do stories work for you, does the emotional graph resonate with you, do you identify with the characters? What I wanted to say is that if you are part of a family, you have to let your loved ones be.”

Here’s where DDD scores over the rest. This family is flawed and not afraid to show it. There’s love and laughter, song and dance, but there are also scornful and ugly stories within that the characters eventually confront. There’s some amount of hypocrisy and pretence that goes into keeping families together, and the film makes no bones talking about that. Akhtar and writer Reema Kagti mock the little clichés that make a family today—like the constant obsession of parents to get their children and friends of children married off, or 30-year wedding anniversaries that are not always a happy affair. “Every family you meet is a bit dysfunctional,” says Akhtar, “The difference is that no one talks about it. Many families are rooted in some kind of skewed tradition, which they believe is how it should be. As people, we are all screwed up, we listen too much to the world. I have seen these families around me and I’m sure you have too.”

With every new film, Akhtar’s scale seems to get grander. Bigger stars and even bigger budgets seem to have overshadowed the storytelling aspect, but she disagrees with the assessment. “Asking why the characters in my film are often rich is the same as asking why the characters in Slumdog Millionaire are poor,” she says. “A story is a story. If you’re going to judge a film by the economic strata of its characters, then that’s weird for me.”

It’s apparent that in the last six years of making movies, the filmmaker’s patterns and priorities have changed. DDD may not be changing the game of cinema in too many ways, and she is okay with that. “Barely anybody went to watch my first film. But Zindagi Na Milegi Dobara made its money. And it’s not like I’m compromising on the story. I would never do that. If you are in the business, you are not making movies out of your own pocket. Your only responsibility is to tell a good story and make that money back.”

That seems like a practical pursuit for any filmmaker who has a lot of money riding on a film, but it wasn’t how Akhtar began pursuing her dreams. She was 21 then and the landscape of cinema was different. It was not about making the bucks, but about telling a story the way one wants to. “I saw this film called Salaam Bombay and it changed my life. I knew this is what I wanted to do. I was a copywriter for a while, but then I got a job with Mira Nair and started assisting her in Kama Sutra.” Here’s where Akhtar learnt much of what she knows about making movies. Working with an American studio opened her up to a discipline of filmmaking she fell in love with. “I wanted to make independent films that would be done in one schedule. I only wanted to make films in sync sound. I hadn’t seen that in India. I hadn’t worked on a film which [had] sync sound till Dil Chahta Hai happened. I did not want to make a movie where I was sitting in an office for two years.”

She chose films like Bombay Boys, Split Wide Open and Bhopal Express to assist, and she had a blast working on them. “I made a choice to work on those films because that was the kind of work I wanted to do. It was never about the budgets. Kama Sutra was made in $12 million, [a very high] budget in those days. It was about the structure— which I still follow in my work. Today everyone is following that discipline.” The first time she directed an actor was on the audition floor of her brother Farhan Akhtar’s debut movie Dil Chahta Hai. “I was casting for that film,” she says, “I had one camera, one actor and one scene to direct at any given point. It was one of the most valuable learning experiences for me.”

Akhtar acknowledges the privileges that came her way by virtue of being part of one of Mumbai’s foremost film families. Unlike those who are complete strangers to the industry, her struggles were about options more than opportunity. Her schooling in cinema began way sooner than most others. “Farhan and I were exposed to some great art while growing up, not just films. Except for adult films, we watched everything. My mother (Honey Irani) used to go to the Film and Television Institute of India in Pune, and we watched everyone’s films from Bergman to Kurosawa to Woody Allen to Scorsese. Of course, I did not understand many of them then, but eventually I started discovering nuances within them.” Zoya remembers her 10-year-old self watching The Godfather for the first time at home. “I saw it on my mother’s projector on a wall in my house. I didn’t fully get it, but I knew it was amazing. There was so much drama and everyone around me was discussing it. I’ll never forget the feeling of watching that film for the first time. I can watch it right now if you play it.”

Among the Akhtar siblings, it was Farhan who was the storyteller at home, but Zoya was more sure of what she wanted from life. “He had a wild imagination. I was a bit more structured. There was a time in life where my parents (Javed Akhtar and Honey Irani) had to literally drag him out of the room so he could figure out what he wanted to do with his life. We’d discuss our lives and dreams with each other, but we both always had very distinct styles,” she says. Her elder brother clearly enjoys multi-tasking, but she is happy being a discoverer. “There was a time in my life when I wasn’t even sure if I’ll be able to do this,” she says. “During my first film, I was never bothered if my actor was late on set, because I at least had an actor. If the set wasn’t ready, I didn’t get worried—because I had a set. That’s the magic of your first film and that can never be replicated.”

As one of India’s few women filmmakers in India, one may imagine she would want to focus on issue-based cinema. Ask her, and she sounds slightly defensive. “If you say filmmakers like Mira Nair or Anusha Rizvi chose to focus on issues within their films, I’d like you to go and watch my film Sheila Ki Jawani (part of Bombay Talkies). It was a movie about a boy who wanted to be a girl. I was talking about homosexuality. Apart from that, I want to tell the stories that make me happy at that given point; otherwise I can’t be true to the film.”

She realises that she’s part of an ecosystem of young, talented and prolific filmmakers and is glad to be addressing a thinking audience. “When I saw Queen, I wanted to play it all over again the moment the film ended. I want to watch Court and Margarita, With a Straw. There is some great work out there today and I’m glad that there is space for everyone,” she adds.

Akhtar says she believes in taking her time to tell her stories. She takes criticism in her stride and is sure it’s only going to make her better. “I got a lot of feedback for my first film. Hugely successful filmmakers and actors asked me not to make it and I still decided to go ahead and make it,” she says, “So today I am only going to take feedback that works for me. As long as I continue to make the films that I believe in, no one should really be complaining.”

She loves to answer a question with a question and is never too shy of rhetoric. It is what makes Zoya Akhtar the person she is, it would seem. Ask her how she sees her journey ahead, and she says, “How can I evaluate my growth? I can’t gauge my work. I have no idea what I’m going to do tomorrow. All I know is that I have started seeing that my films revolve a lot around identity and who we are. I’m going to try and stick to that.”