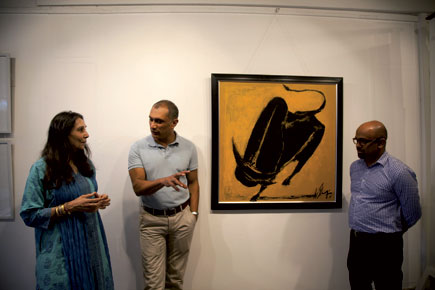 
If people can rent furniture, air conditioners, cars and DVDs, then why not art? This question niggled art lover and designer Narayan Gopalan so much that the 30-year-old gave up a lucrative career as a web and mobile interaction designer to team up with his buddy PD Ganapathy, a quintessential Coorgi with a zest for life, to pursue a radical idea: rental art. Most people, they figured, can’t afford to pay the number of zeroes trailing the price tag on an oil-on-canvas or moulded brass work. But rent? Why not? Thus, in 2011, in collaboration with the well-established Gallery Time and Space in Bangalore , The Art Renter was born.

The Art Renter is a unique venture, working in collaboration with artists and galleries to let individuals, companies and organisations rent original art pieces. They not only deliver the customer’s choice, but also ensure that it is mounted safely. Some of the works available can be rented at 10 per cent of their value a year. They can be kept for a month or even a whole year.

The Art Renter’s catalogue includes water colours, oils on canvas, brass works and photographs by artists like Mridul Chandra, JMS Mani, Dhiren Sasmal, V Elango, Prasanna Kumar, Vijay Nagvekar, Amit Bhar, among others, along with a collection of lithograph prints by British painters from the 1800s. Those interested in perusing the collection can access the catalogue online at Theartrenter.com.

Perhaps art rentals is an idea whose time has come, though the cofounders admit that San Francisco-based start-up Artify.it has been a huge influence on their project. Artify.it is a sort of online gallery that rents and sells art to customers, frequently updated with a selection of new works by local artists at a fraction of their retail price. Through the website, customers can experiment with different artists, medium and styles. The Art Renter, too, allows its clients to freshen up their walls regularly. “Our clients can also buy a piece they rent if they want,” says Ganapathy.

Any doubts about this model working in a high-brow close-knit art community can be put to rest by speaking to Renu George who owns Gallery Time and Space on the upmarket Lavelle Road in Bangalore.

George, who has tied up with The Art Renter, agrees the idea is still nascent, but believes it has great potential: “Younger and upcoming artists are open to renting out their works, either paintings or bronzes. We wouldn’t touch senior artists, though I am trying to persuade some of them. They are yet to test the waters. But I think renting their work is a good idea as it increases visibility. Art is all about appreciation and [the] more they are seen, the better it is for the fraternity.” Herself an art lover, George’s interest in starting a gallery in her beautiful old Bangalore bungalow can be traced to her own years as a collector. “We want this kind of activity to grow with the involvement of artists. Of course, we have bought a good collection of work from younger artists, which is available for rent,’’ she says.

In 2007-08, when India’s art market was upbeat, there was a buzz about investing in art collections; it was said that an investment made today would increase in value manifold just a few years down the line. ‘Buy a piece of art today and it will realise three to five times its value’ screamed the message put out by auction houses. But then, instead of going under the hammer for astronomical sums as predicted, the country’s art market, mirroring the economy, simply went under. Young artists were further hit when architects and interior designers side-stepped the art market and covered their walls and spaces with imitations, reducing the visibility of fine artists. Then the inevitable happened: cheap prints flooded the market, sidelining original art.

“But, art is not like gold or real estate. It is a very personal thing. My personal feeling is that art gets value only if people don’t want to sell,” says George.

With the market yet to make a course correction, in stepped Gopalan and Ganapathy sensing an opportunity to creatively market art. “There is no market for works in excess of Rs 25,000 [apiece],” says Ganapathy, “[Through] this concept, we make [art] more affordable for patrons as well as create a market for artists too.”

An upcoming painter adds: “There is also no set formula to calculate value. For example, a well-known artist’s work may go for an astronomical sum just for the name involved, while a better appreciated piece may not fetch more than a small slice of [that sum].”

Currently, The Art Renter operates only in Bangalore, but its cofounders aim to gradually expand its presence to other cities. Tie-ups with galleries and sourcers from abroad, too, are on the cards, which will help it offer a wider range of choice.

They also want to create a bank that will help to resell across borders. Apart from the tie-ups adding numbers, they are aware that no one buys art from abroad as it attracts 100 per cent duty. But if the piece is meant for rental or exchange, no duty is levied.

As security for original pieces is important, they prefer mainly hotels, corporate offices and a limited number of homes on their client list. “Hotels are an important area where we intend to extend our presence by displaying art in some rooms and place a catalogue on the coffee table. These may help generate interest. At corporate houses, we suggest receptions, conference halls and CEO chambers [as places] where art pieces can be displayed. Changing works frequently will [enhance] the corporate image and aesthetic appeal of its top guns.”

The general manager of a boutique hotel with a primarily infotech clientele says he has several long stay guests who get bored with the same decor. “Buying art and artefacts is very expensive. Changing them regularly is one way of retaining clients… just putting fresh flowers in the vase everyday is not enough. The works are carefully chosen to provide a soothing environment in common areas and rooms.’’ This hotel has rented four pieces so far. As the hotel is new, it does not invest in art in the same way as, say, the Taj Group, which has accumulated a rich collection over the years. “For new players like us,” says the GM, “even buying medium range art costs as much as 30 per cent of the interior cost per room. It’s easier to rent art, and we also get a commission if any pieces get sold.”

Of course, the going has been slow, as, the duo feel, the art market still lacks maturity. “Attitudes towards rented art have to change; egos, too, come in the way. But there’s nothing wrong in renting works, as you will eventually become a better patron,” says Ganapathy.

The Art Renter has made a point of showcasing junior and upcoming artists, arguing taste is just as important as fame: “Our aim is to make expensive art more affordable. Eventually, the client has to draw satisfaction [from] seeing the work, and not as much [from] owning or renting it. One should know that tastes also vary and improve over a time. So renting art would be a better starting point than buying pieces that may eventually not be your taste.”