The village that refused to be a good story

The media went to gawk at the sight of a mass wedding in a ‘village of prostitutes’. But they were the real spectacle 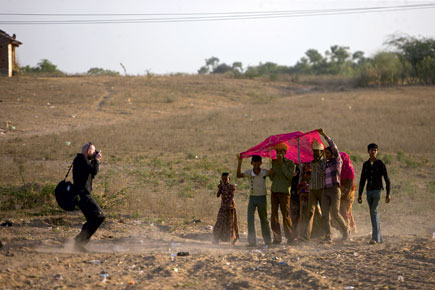 The media went to gawk at the sight of a mass wedding in a ‘village of prostitutes’. But they were the real spectacle


Somewhere, in a land far away, there exists a village. Those who are familiar with it say it is “pristine” and “picturesque”, and that life there is “simple” and “pure”. Visiting this village seems to sharpen the senses dramatically, going by their lyrical descriptions of earthy scents and intense colours rarely seen outside of a hallucinogen-enhanced dream.

This village, of course, exists in the imagination of city-based reporters and foreign correspondents, who make sure to go there every now and then, when there is a Good Story to be had. The Good Story is something of a misnomer because it usually corresponds to a very bad turn of fortune—caused by age-old evils like caste violence and honour killings, or elemental tragedies like floods and earthquakes. Journalists also like to find silver linings in calamitous clouds: the pink sari-clad activists in a dangerous male-dominated region, the young girl who rejects her sinewy-faced old suitor.

Or the mass wedding to be held in a “village of prostitutes”. This is what has drawn a clutch of reporters and photographers to the village of Wadia in Gujarat’s Banaskantha district. Reports in the run-up to the wedding had mentioned that about a dozen young boys and girls of the nomadic Saraniya tribe would get married, and that an NGO, the Vicharti Jaati Samuday Samarthan Manch, was organising the event. The state government, playing the indulgent uncle, would give the newlywed couples gifts including cheques and toilets.

On the eve of the wedding, several jeeps and SUVs pull up in front of the shuttered village school, and a number of people tumble out: Ahmedabad-based agency photographers toting threateningly large bags of equipment, blonde reporters in aviators and roughing-it-out uniforms of faded cotton, photographers in battle fatigues who’ve flown in straight from Kabul, and a wispy-bearded hipster with a vintage camera. A blonde journalist turns to the hipster and asks if he speaks English. He nods, upon which she says: “Where are the girls? Do they speak English?”

Along either side of the impossibly smooth road leading to the village—bare, except for the occasional ashy ox or bright white SUV—are fields of mustard, cumin and castor. A group of young women in pink and red saris shimmer over the horizon with pots of water atop their heads, and the agency photographers hurry after them, accompanying their walk down the path with a chattering chorus of releasing shutters. Moments later, a group of young men appears, holding a bright pink cloth above a few turbaned grooms’ heads, and a photographer who’s flown in from Kabul darts forth and runs backwards before them, kicking up dust as he works the trigger like a machine-gun.

Everyone’s attention shifts back to “the girls”. How many are there? Where are the NGO folk organising the event?

Seated beside the courtyard of one of the houses closest to the road, Jinnubehn is the first bride to be discovered, and she is less than happy about it. She fixes us with the stark stare of a cornered animal and gives a few terse replies to our questions while a woman covers her turmeric-smeared arms and legs with dense mehndi patterns.

“No, my parents aren’t here—they both died in a tractor accident five years ago.”

And then, when we stammer something about the village “reputation”: “I don’t understand your question. Why don’t you go look at where the wedding will be held.”

Over the next few hours, we search in vain for brides and their relatives, and less hostile residents who (we hope) will tell us the true story. Instead, we get a multiplicity of contradictory “truths”, followed by the inevitable invitation to go elsewhere.

“Prostitution did exist 25 years ago. There’s no trace of it now,” says an elderly man sipping tea out of a saucer.

“It used to be there, yes,” says a woman standing outside her house, “But that was 45 years ago.”

“Don’t believe anyone who tells you that,” says a young man with two daughters clinging to his knees. “They want to steal our land. It’s all a pack of lies.”

“Sure,” says another man, sitting in front of the village shop, “it used to exist when we were in Budhanpur 45 years ago. But then the bad people who did it remained there, and the rest of us came and settled down here.”

‘No, no, no,” choruses a dhol player and his wife, who’s rocking her grandchild to sleep in a thin cotton hammock tied to a bed, “We live off honest labour, off the fields, livestock and masonry work.”

“Maybe this used to happen five years ago,” says Sarpanch Raojibhai with a self-satisfied grin, “but that was during the previous sarpanch’s term.”

As night falls, deafening disco music begins to throb out of oversized speakers set up in front of the school. Inebriated young men cluster close together and begin to dance with abandon. Trucks roll up, with turbaned grooms in winking fairy light garlands looking out of the windows.

At the photographers’ behest, some of them come out and pose in front of the trucks, holding swords aloft—the Saraniya community, it is said, was originally engaged in sword sharpening at the court of Mewar’s Maharana Pratap.

Leaving the increasingly raucous party behind them, journalists get into their cars and leave, grumbling about unhelpful NGO workers, uncooperative residents and whether “the story”—prostitution—could actually exist if there’s no “evidence” even suggesting it. “There aren’t even used condoms around anywhere,” one journalist says mournfully.

The next day, driven by unforgiving deadlines, the reporters return, mutinous and determined to try a different tack. They purposefully avoid the wedding tent, where eight couples are ranged before 12 tiny child-couples, who are judged old enough to be engaged. Instead, they roam outside, looking for anyone who’d speak about prostitution in the village.

One such person is Vijay Baru, a senior journalist with the paper Gujarat Samachar, who declares, “This is Gujarat’s Thailand. You roll up in a car and pay an entrance fee, just like a club membership. Then, an itemised cost is negotiated for everything—from getting the kids out of the room to taking off each item of clothing.” Of the wedding, he remarks, “You know how thousands of animals are killed in slaughterhouses every day? Well, today we’re saving one truckload.”

Mittal Patel, the NGO worker and main driving force behind the wedding, recounts her six-year-long involvement in the welfare of the village. Until three years ago, she says, its residents used to live in huts, with no lights or drinking water. “In 2006, about 126 women in the village were involved in prostitution,” she says, “Now, they’ve travelled outside, seen normal domestic life, including in my own home—and they want it for themselves. So only 24 women remain in the profession now.”

A group of men lounging under a craggy Khejri tree are garrulous with boredom. “Prostitution is far from over here, though that’s what they’ll say for the next few days until the police leave,” says a tall young DJ from the neighbouring district of Patan. “When I came here ten days ago, people ran after me—you know, like people selling fruit or Pepsi run after you at a bus station, and they asked me who my dalal (agent) was, and who I wanted to see.”

A moustachioed man from Vadgam remarks, with an extravagant leer, that he entirely approves of the local “business”. Everyone chuckles delightedly. A young Thakur boy from a village half a kilometre away lists all the cars he saw “every night”. “They all cost upwards of [Rs] 10 lakh,” he says, “That I guarantee.”

An elderly man in white who has crept up to the edge of the crowd suddenly roars, “What are you writing about our village?” and demands that I tear up the offending pages. “Madam,” says the young car-spotter, “Run!”

I walk away, though I am not allowed to leave until I have convinced several angry residents and NGO workers that my article would be “positive” and not “hurtful”.

Prashant Dayal, the Ahmedabad-based reporter who broke the story in the English press, explains that the tense atmosphere in the village is partly on account of the neighbouring villages’ insulting treatment of Wadia’s womenfolk, which makes them travel to Rajasthan across the border for provisions. The rest of the responsibility, he says, must be borne by insensitive journalists—a category he’s not entirely exempt from, as he has authored about ten articles on the subject of Wadia’s prostitutes and pimps in the space of a month.

Thoughtless journalists, he claims, nearly derailed the mass wedding. “The ladies complained to the NGO-workers: ‘Reporters are harassing us, asking us abnormal questions,’” Dayal says. “That’s why despite my coming here for 20 years, I’ve never once directly asked anyone about prostitution, or quoted anyone about it. I’m trying to earn their trust.” But the rest of us—including the condom-hunter —see this as an “omission” that could cast his claim in doubt.

It’s true that reporters want villagers to instantaneously yield whatever makes them a Good Story, and that they feel entitled to such a confession just because they bothered to show up. On the eve of the wedding, I’d seen a European journalist argue with an NGO worker, who was explaining to her why village residents were “not cooperating”: “They are telling me, ‘Are we an exhibition, for so many people to come to see?’” The reporter replied plaintively, “But we’ve come all the way from abroad. For this!”

Dayal points out another problem. Reporters are often dissatisfied if reality doesn’t fall in line with cinematic hyperreality. “They’ve all seen Hindi movies,” he says, “and they come here expecting to see half-clad creatures in bright lipstick standing at every door. One even turned to me and said, ‘Yaar, itni sundar nahin hai (They aren’t all that good-looking).’”

It all comes down to something of an existential problem. “Indian and foreign journalists are like coffin sellers,” says Dayal, “Every morning, they wake up and pray for disaster. If murders, rapes and robberies didn’t occur, their business would not flourish.” It’s when the jeeps and OB vans sweep on in search of the next Good Story that life can continue once again.