Abdul Rashid Khan is feted as the oldest performing Hindustani classical musician. On a typical day, he does his namaaz five times, teaches, eats one meal and smokes a hookah 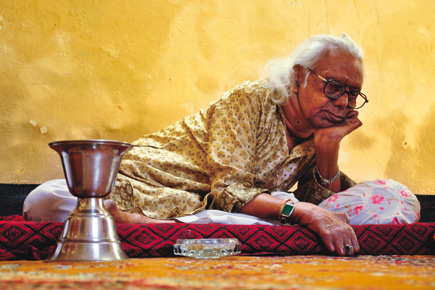 Abdul Rashid Khan is feted as the oldest performing Hindustani classical musician. On a typical day, he does his namaaz five times, teaches, eats one meal and smokes a hookah


Mid-day Sunday, the narrow lanes criss-crossing the Sangeet Research Academy (SRA) campus at Tollygunge, Kolkata, wore a deserted look. Sounds of household chores filtered out of the living quarters, home to the finest musicians in the country. If one hoped to catch the strains of a fine thumri or khayal (Hindustani classical forms), one would be disappointed by the quotidian living. But in one of these quarters lived a god’s gift to the world of music, said to be the longest surviving and performing Hindustani classical musician, Ustad Abdul Rashid Khan.

The 102-year-old Hindustani classical singer squatted on a rich pile of carpet. A weathered black-and-white daguerreotype of his guru Shah Nayimuddin of Salon hung on the yellow plastered walls of his quarter. Another wall bore the Ras Sagar award certificate he won in 2004. One sought out Ustad Abdul Rashid Khan after hearing him perform Raag Alhaiya Bilawal flawlessly at a concert in Mominpur in February this year. He sang for more than an hour-and-a-half , with rigour and elan.

It’s not just Mominpur, Khan saab performs and travels regularly for concerts. There is no foolproof way of verifying whether he really is the oldest of them all, but this much is undeniable: Khan’s career has been exceptionally long and rich. The cultural organization Spic Macay profile of Khan says, ‘He has been singing longer than anyone else in the country today… In spite of being over a century old, he seems to have defied ageing and continues to perform with the strength, grace and nuance of an artist in his prime!’

How do you reign over an audience as majestically as he does at 102? “Allah ki dua hai, Allah ki den hai (Allah’s blessings, Allah’s gifts),” says Ustadji, raising his palms skywards. “He leads an ascetic life,” offers Shubhamay Bhattacharya, his oldest disciple in Kolkata. His grandson Billal, who plays the tabla with him, smiles mysteriously when asked the secret behind his grandfather’s voice. Khan smokes the hookah everyday and chews paan and tobacco. Yet, Bhattacharya insists he is a teetotaller.

At mid-day, the ustad sits munching biscuits and fritters and sipping tea. This apart, he has only one meal throughout the day. “Ek baar hi khata hun (I eat only once),” says the ustad, wiping away a tear that rolled down his left eye. After a cataract operation, his left eye developed an ulcer causing him much distress. But that does not deter the musician from travelling not just within Calcutta but also to places like Nagpur, Bhopal, Agartala for performances. “He has travelled from Kashmir to Kanyakumari,” asserts Billal. How does he manage? “Main toh train pe jata thha doh saal pehle tak (I used to travel in trains till a couple of years ago),” Ustadji says. It is only in the past two years that he has taken to flying, and that too when he had to go to Agartala. “There are always two or three people with Ustadji. His wheelchair is taken along, he cannot walk these days,” says his disciple.

A typical day for Khan saab begins at four in the morning. He smokes his hookah and then recites a passage from The Quran. He then takes his cup of tea and bathes. A devout Muslim, Ustadji reads his namaaz (prayers) five times a day. After the morning namaaz, he begins teaching. “From 10 in the morning, he teaches his disciples till 3.30-4 pm,” says his daughter Parveen Khan, who lives with him and takes care of him now. His second namaaz of the day is at five, after which he has some light snacks and pores over his books and old compositions. The century-old musician is also a poet. He writes bandishes under the pseudonym Rasan Piya that he sings in his programmes. All his bandishes have been recorded in his voice under a project by Ford Foundation and BBC Radio. After namaaz at 7.30 pm, the singer has his only proper meal of the day at 8.30-9 pm. “And the meal is spicy and hot. He will not have it, if it is otherwise,” says the daughter.

Born in Salon on 19 August 1908, nearly 83 km from Rae Bareilly, Ustad Abdul Rashid Khan’s family was full of eminent musicians. “Mere pehle talim raha Ustad Bade Yusuf Khan ji se, jo apne pitaji ke pitaji thhe, aur apne walid Chote Yusuf Khan ji se (I learnt from my grandfather and my father at home).” A practitioner of the Gwalior gharana, the ustad for 22 years did his riyaz (practice) from 7.30 in the evening till five in the morning. Apart from music, he also had another hobby, wrestling. “Uttar Pradesh ka pehelwaan bahut mashoor thhe (the wrestlers of Uttar Pradesh were renowned),” he says. Then, his walid (father) gave him an ultimatum: either wrestling or music.

There were 22 native states in Rae Bareilly where Khan and his forefathers performed. “They were settled in Rae Bareilly and never left the place,” says Bhattacharya. Khan was a court musician at the court of Raja Saheb of Chandapur for two years.

It was only after his father’s death that he travelled beyond Rae Bareilly to Gwalior, Mysore, Baroda. He was emerging as a well-known performer when he lost his first wife. “Bachhon ko bada karna thha, bahut kaam thha ghar pe (I had to bring up my children, there was a lot of work to be done at home),” says the ustad. He was cut off from the world of music for about one-and-a-half decades during which time he taught music at a school he set up in Rae Bareilly. “Kamane pe dhyan dena thha (I had to earn a decent sum),” he says.

Only after his children grew up and were married did Khan start performing again. Musicologist Kumar Prasad Mukhopadhyay heard him at a programme where he was also performing and told vocalist and musicologist Pandit Vijay Kichhlu about him. Ustad Zakir Hussain and Pandit Vijay Kichhlu went jointly on a tour all over India for an ITC concert. “When they heard ustadji at Rae Bareilly, Pandit Vija Kichhlu asked him to come to Calcutta and join the SRA,” recounts Bhattacharya. “Ustadji came and went back several times over a period of one year before he decided to move to the SRA,” says his grandson.

None of his children has taken to music, laments Khan. “His youngest son Raiz Khan, though, is a music teacher at Noida,” says Bhattacharya. “Baki sab gaye, ek jan toh contractor ban gaye (The others have nothing to do with music, one of them has become a contractor),” says the old man.

But he pins a lot of hope on his grandson Billal, the son of his daughter Parveen Khan. Billal is already an established tabla player who accompanies the ustad in all his concerts.

“Sab Allah ki den hai (It’s all Allah’s gift),” says Khan saab, as he recounts how Kichhlu prevailed upon him to live in Calcutta. As his daughter feeds him the last of his snacks, the 102-year-old narrates a tale that seems straight out of an Agatha Christie mystery. He was at Berhampore when a rival performer poisoned his food with mercury. This happened about 40-50 years ago, says Bhattacharya. “By God’s grace, nothing happened to his voice, but his fingers and toes were deformed,” says the disciple, who speaks of his guru in awed tones. “He is everything to me, my guide, philosopher, father. He says that only if one becomes a spiritual person can one become a good singer,” says Bhattacharya.

And so having weathered an attempt on his life, and the ups and downs of 100 years, Ustad Abdul Rashid Khan continues to enthrall his audience.