The Truman Show and Sundry Spinoffs

Reality and reality-based shows on TV provoke the State’s deepest censorship urges, but aren’t its objections all too arbitrary? 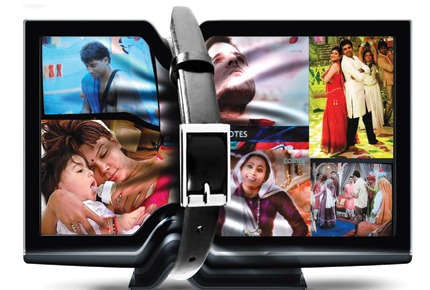 Reality shows on TV provoke the State’s deepest censorship urges, but aren’t its objections too arbitrary?


Colors TV has a lot going for it. In a little more than a year of its launch, the channel—a joint venture between Raghav Bahl-promoted TV18 and global network Viacom—toppled Star Plus from the No 1 spot in India’s television rating point (TRP) sweepstakes. Its celebrity centric reality show, Bigg Boss, now in its third season, is reported by this gauge to be the most widely and keenly watched programme in satellite-TV households today. That has forced its rival channels such as Star Plus, Zee, NDTV Imagine and Sony to boost their ‘reality’ content, and not surprisingly, all their recent blockbuster shows have been in this supposedly scriptless genre. So, if Star Plus had middle-aged men and women confessing their extramarital affairs on Sach Ka Saamna, Rakhi Sawant was busy hubby hunting on NDTV Imagine.

But Colors’ success isn’t reflected only by high TRP ratings and its trendsetting ways. Its programmes have been getting up the nostrils of bureaucrats at the Information & Broadcasting (I&B) Ministry, which has apparently been watching enough TV to worry about what’s on airwaves these days, with unfailing regularity. Last week, two of Colors’ shows, Bigg Boss 3 and Na Aana Iss Des Laado, invited ‘show cause’ notices from the Ministry for airing offensive content. That took the knuckle-rap tally for the new entrant to four in recent times.

Standup comedian Raju Srivastava’s trousers being pulled down, and other farcical-if-vacuous goings on inside the Bigg Boss House can only be matched by the current tussle between TV channels and a trigger-happy I&B Ministry. In the last two months, the Ministry has shot off nearly 20 angry notices to various TV channels (and nearly 270 over the last few years) for what it considers inappropriate content. Last week, the Ministry’s sensibilities were outraged by a rather negative portrayal of a district magistrate on Laado. The Ministry’s latest missive to Colors reads: ‘In the serial the District Magistrate has not only been shown as corrupt and a womaniser, but his lust for women defies any logic. In fact, in one of the episodes women are paraded before him on his request. The Magistrate, who is apparently shown on an official visit to investigate a case of female foeticide has also been shown to indulge in blackmail. The entire characterisation appears to be a grotesque caricature of a district administrator. There is no denial of the fact that portrayal of a public authority in a negative role is well within the rights of a creative medium. However, in the democratic set up of our country, District Magistrate is the chief representative of the Government at the District level. Deliberately portraying the character of the District Magistrate in a derogatory way appears to demean the public institution and bring it to disrepute unnecessarily.’

Strong words, those. As is usually the case in such matters, the official signs off with a warning that if the channel didn’t come up with a suitable explanation or apology within 15 days, its uplinking/downlinking permission could well be cancelled. Earlier this year, a variety entertainment reality show, Entertainment Ke Liye Kuch Bhi Karega, got Sony TV into trouble with Ministry officials for showing a participant put a snake into one of his nostrils and bringing it out from his mouth, and then repeating the drill in reverse order. A youth reality show, Roadies, on a channel formerly known for music television, MTV, too ended up in dire straits (the babu version) because some participants used ‘extremely foul’ language on air. In its defence, the channel claimed that it was merely reflecting the lifestyle and attitude of the youth in India today. But the Ministry would have none of it.

Ambika Soni, the current I&B minister, insists this isn’t leading up the censorship highway. “The self regulatory system, to which broadcasters are also giving importance, should be so effective that the Ministry does not have to send notices again and again,” she said last week at a gathering of industry leaders, “We have issued about 268 such notices. We don’t want to do this, but can’t help it. I feel self regulation is possible by media houses and they are doing it also. Thus, for addressing all these issues, we are trying to come out with an independent regulator or a mechanism.” Words not to be taken lightly.

Independent viewers say that while a good case could be made against most of these shows on aesthetic grounds alone, showing government officials in poor light hardly qualifies as indecent. “There have been hundreds of Bollywood films that have shown high ranking governments officials like the police commissioner to IG to judges being corrupt,” says a senior Colors executive, “And there’s no dearth of films and even TV shows that take digs at corrupt chief ministers, cabinet ministers and sundry politicians. In comparison, I’d say that the DM’s character in Laado is a bit mild. The show cause notice in this particular instance is bewildering. Also keep in mind that some our programmes such as Balika Vadhu and Laado are about grave social evils like child marriage and female infanticide.”

Scissor wavers at the I&B Ministry claim that they have only been following the rulebook. “After the advent of reality shows,” says an I&B official, “it is evident that in the name of spontaneity, the participants seem to be enacting a pre-planned script aimed at titillating viewers and boosting TRPs.” In a hyper competitive field where anything can be served up at the altar of TRPs, the supreme arbiter of tele-destinies, any controversy set off by a TV show generates the publicity needed for a viewership bump.

While there is no censor board for TV, the Union’s Cable Television Networks (Regulation) Act, 1995, lays down a programming and advertising code that says that no programme can be transmitted/re-transmitted on any cable service which offends ‘good taste and decency; contains anything obscene, defamatory, deliberate, false and suggestive innuendos and half truths; criticises, maligns or slanders any individual in person or certain groups, segments of social, public and moral life of the country or denigrates women through the depiction in any manner of the figure of a woman, a form or body or any part thereof in such a way as to have the effect of being indecent, or derogatory to women’.

Hindi news channels that air lurid stories that stir up superstitious sentiments have fallen afoul of the code so often that nobody has kept count. In fact, for all the ministerial protests, channel blackouts remain a rarity. Sure, late night frontal nudity on AXN once got the channel knocked off air—via action taken by Priyaranjan Das Munshi, the former I&B minister. But otherwise, Indian airwaves are unpoliced. “The news channels seem to get away with murder in the name of freedom of press, while the general entertainment channels always get the wrong end of the stick, thanks to the hypocritical moral brigade,” says a Sony TV executive.

Are we, then, looking at the wrong screen? Is Rajeev Khandelwal’s polygraph show, Sach Ka Saamna, worth a bigger uproar in Parliament (as happened in July this year) than the other ‘reality’ horrors that make less of a lunge for TRPs?