The Slow (And Almost Certain) Death of Dhrupad 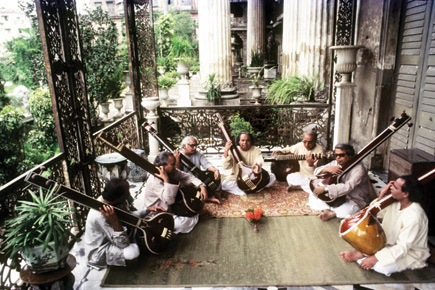 
The accolades are impressive. The epithets no less so: the oldest surviving Indian classical music form, a Mughal court favourite, to quote just  a few. Add to that,  a story of origin that stars the fabled lovers Baz Bahadur and Roopmati, no less. It merits capital letters at the very least. Yet, when it comes to actual rendering on the stage, Dhrupad is fast approaching the status of an endangered species.

Its exponents remain as devoted to the form as ever. But undeniably, fewer and fewer learners are drawn to it with every passing year. More worrying still, platforms for exponents of the form have shrunk, so youngsters get little or no opportunity to listen to renderings outside the pale of Spic Macay.

Even the prominent house of the Dagars, considered to be the stalwarts on whose shoulders the art form rests today, agree that its future is threatened. “A time will come when Dhrupad will reach India as an item exported from another land,” says Ustad Saifuddin Dagar. Others in the Dagar fold are not so cynical. Some feel that Dhrupad, despite its downward slide, is not likely to be snuffed into extinction because of its spiritual core.

Yet, Ustad Saibfuddin Dagar points out that it is in the very nature of learning Dhrupad that makes its preservation precarious. “It is gurumukhi shiksha. It has to be learnt from a guru. It is a form that needs sacrifice, and  we learnt to starve happily before we learnt the art form. So we think nothing of going without support when it comes to singing Dhrupad,” he says.

That’s the zeal of the older generation. But the lack of sponsorship worries the next generation.  “People are willing to dole out lakhs for a college fest, but less than 1 per cent of their advertisement budget is given over to Dhrupad,” says Wasifuddin Dagar, the most senior among the current generation of Dagars.

Yet, the family’s commitment to the form is unwavering. Bahauddin Dagar, a vichitra veena instrumentalist of the form, says: “Dhrupad is given to the family as a jamami and we will continue to play and practise even without support from sponsors, as we have no right to destroy it.”

Cinematographer Arvind Sinha, who has made several documentaries on Dhrupad and its numerous exponents, claims that there seems to be a concerted effort to sideline the form. His 17-year association with the subject has convinced him that though its exponents are currently earning their livelihood from concerts held abroad, Dhrupad will still command a following in India thanks to digital technology. “If concerts have dried up, all is not lost. This rich form has other aspects crying out for preservation. The need for a vigorous system of proper documentation is what will keep it alive. The Films Division has commissioned films on the Dagars. Unfortunately, their diktat of an hour-long documentary on the entire clan leads to sketchy production. The work needs extensive documentation, for the elder Dagars have a bank of knowledge and interpretations of the Dhrupad that could be the nursery of music knowledge in our land,” Sinha outlines. This optimism notwithstanding, he dismisses the hope of mainstreaming the art form as a utopian one. “Today, Dhrupad is not even present in the current classical music circle,” he sighs.

But senior journalist and former editor of Hindi daily Hindustan Mrinal Pande, whose association with the arts is well known, has a different take. “Dhrupad is still a pan Indian art form. The question of its popularity is inconsequential, because nowhere in the world is classical music popular. Dhrupad, like any other form of this genre, has a dignified audience of its own, who understand, appreciate and relish the art. People should come forth to the Dhrupad. Dhrupad does not have to lower itself by going to the masses. Dhrupad does not lend itself to a ‘we the people’ level of discussion.”

As for professional sponsors, her contention is precautionary. “We should be careful in handling professional sponsors,” she says. “It is more in Dhrupad’s interest to hold conclaves to discuss Dhrupad and how this music can be explained to the audience at large—so that the psychosis and apprehensions can subside.” Pande points out that the last musical conclave in India was held all the way back in 1916.

Meanwhile, Dhrupad’s growth in the West seems to be spurred by conscious contributions by musicologists, practitioners and afficionados like Dr Dagmar, a political scientist who first became interested in Dhrupad after she heard a recording of the late Moinuddin Dagar at Spain’s Casa Azia in the 1960s. Later, she discovered the Venice musicologist Alain Danielou. According to her findings, in the 1960s and 1970s, Dhrupad concerts began attracting European listeners. Some even took to learning the form. Today, the impetus of those Europeans admirers has culminated in a renewed interest among NRIs and Europeans alike, so that Dhrupad concerts in Paris, Berlin or Toronto are a given at Indian music performances.

The enthusiasm may have shifted West, but all is not lost back home. The style is still a crowd puller, albeit among the knowing few. Using platforms other than concerts seems to be the logical way ahead. And given Dhrupad’s rich legacy, using technology and facilitating discussions among lovers of the form worldwide could well be a road worth travelling.