The Private Life of Vinod Sehgal 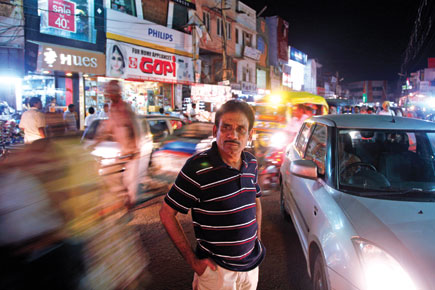 
AMBALA — Inside a moss-ridden room in a seedy hotel in Ambala, Haryana, Vinod Sehgal holds a cigarette and bottle of beer in one hand and his mobile phone in another. The room reeks of dampness and love-making. Apparently, the hotel is used mostly by couples in need of snatches of privacy to acquaint themselves with each others’ bodies. The sound effects right now, though, are incongruous—noisy fighter planes flying overhead from a nearby Air Force base.

“Yes, yes, I know, I am not drinking at all,” Sehgal assures his wife over the phone in response to an agitated voice that almost jumps out of it. “For years,” he says a little later, “I have felt ehsaas-e-kamtari towards her.” It’s an Urdu phrase for an inferiority complex, but Sehgal means his own helplessness in doing much for his wife. “But wives also need to understand an artiste’s temperament if they are married to one,” he adds, taking a long puff of his Wills Navy Cut.

Chances are you wouldn’t have heard of Vinod Sehgal. But to anyone familiar with the crests and troughs of ghazal singing, Sehgal’s name is more than a name, it is a crescendo that few could achieve. He is a star who almost turned into a supernova much too early, crumpling inwards before his time, leaving an afterglow that’s everlasting. Those who have heard his ghazals like Shaayar-e-fitrat hun mein, from an album called Kahkashan, don’t care much about what he could have been. For such fans, his voice and music are enough. In a way, Vinod Sehgal’s own life song is the one he sang for Gulzar’s Maachis: Chhod aaye hum woh galiyan.

It was about seven years ago that he returned to his hometown Ambala after struggling in Mumbai for over 35 years, a period long enough to see the music industry from close quarters. “I have had music directors tell me in the 70s that in the next two years they’d be the biggest thing in music,” he recalls, “Three decades later, some of them just earn their livelihood by music tuitions for uninterested daughters of wealthy businessmen. And from evening till midnight, they just drink.” At least he is still composing music. There are small serials on TV whose title songs he has composed. He still gets invited for private shows by fans. Some of them get drunk on his voice more than alcohol. He is, after all, ‘Shaayar-e-fitrat’: a poet by nature’s own command.

“I am established, yaar. I’ve no regrets. You see, God cannot only exist on Pali Hill,” he says, referring to a Mumbai locality of Bollywood’s who’s who.

Vinod Sehgal remembers every moment of his life. “You know Shayaar-e-fitrat hun mein, how I sang it?” He tells the story. It was the late 1980s, and he’d returned to Ambala depressed since he couldn’t find any work in Bombay. For days and days, he wouldn’t talk to anyone. It went on for three months. Until, one day, he got a call from ghazal maestro Jagjit Singh, also his mentor in some ways. “Come over immediately,” he said. It was for the recording of Kahkashan, for which Sehgal got to sing ghazals of famous Urdu poets like Jigar Moradabadi and Firaaq Gorakhpuri. Also present in that Bombay studio was Jalal Agha, the late actor, smoking opium in a chillum. Just before Sehgal was to record his first song, Agha held the chillum out for him and said: “Vinod, ek drag le le (Vinod, take a drag)”. He refused. “Laga na, kucch nahin hoga (Come on, nothing will happen),” persisted Agha. Finally, Sehgal took a drag or two, and in less than 15 minutes, he was on. That is how he recorded his first ghazal for that album.  It remains a favourite among his fans even today.

The second time he was forced back to Ambala, since he couldn’t afford good enough accommodation in Mumbai for his newly-wed wife, was in the 1990s. But then, one fine day, someone turned up at his door from Mumbai, saying Gulzar had been hunting high and low for him. “Hausla kyun gira liya? (why have you lost courage?)” he remembers Gulzar asking, before offering him the lead song in his forthcoming film on Punjab militancy, Maachis. In the song Chhod aaye hum…, sung alongwith such singers as Suresh Wadekar and Hariharan, his voice is especially stirring, and when he sings the lines ‘Ek andha kuan hai ya, ek band gali si hai’, you feel yourself staring at an abyss.

I first met Vinod Sehgal on a balmy evening in Chandigarh in 1996. A college student then, I was lying drenched in sweat staring at a listless fan in my rented room, when I heard beautiful voices singing a nice song from a bad film: Maine kiye paar saat samandar from Rajkumar. It was the twin daughters (roughly ten then) of the musician family living upstairs. Amazed, I sought them out and implored them for an encore (even now, whenever the power fails, I can’t help being reminded of the song). A few days later, their music-teacher father turned up with another man. “Pehchaano inko (recognise him),” he said. “Arre bhai, Vinod Sehgal hai (He is Vinod Sehgal).”

We knew the man’s work well. In fact, Kahkashan would be played in our room in a loop. There were several ghazals in the two-volume set that we thought outshone Jagjit Singh’s own. As my room-mate Kamal rushed off to get soft drinks, I got talking to Sehgal. He told us about this song he had just recorded for Gulzar. “It is from a film called Maachis,” he said. In a few minutes, the music teacher brought down his harmonium, and Sehgal sang aloud for us—the song of the bottomless well, the song of the dead end.

We left college that year, and two years later, heard that the music teacher had died. After Maachis, Vinod Sehgal also disappeared—lost in the abyss he conveyed so searingly, it seemed to us.

And now, 14 years later, I had found him again. He was the very same man I had met in my college days. No airs, no dramatics, just wedded to his music.

Even if it’s a song for the Haryana Police that he composed recently.

Sehgal’s family comes from Sargodha in what’s now Pakistan, and both his father and grandfather used to sing, though not professionally. As a child, his father Sohan Lal Sehgal would run to a nearby mohalla of Mirasis—ballad singers. At Partition, the family fled to Delhi, and then was sent to Ambala for rehabilitation. The senior Sehgal worked in India’s Post & Telegraph department, and would encourage Vinod to learn music. As a young boy, Sehgal went to various music teachers to pick up the basics of his sargam. “Those days, the career spectrum ranged from peon to clerk,” Sehgal quips. The family’s financial condition was bad, and he had to work at a cloth shop to supplement the family income.

It was around then that Master Anil, who had played the role of actor Dharmendra in the megahit Phool aur Patthar, came to Ambala along with his mother to visit relatives. “The whole mohalla flocked to see him,” recalls Sehgal. Curious, he went too. There, the neighbourhood kids boasted of Sehgal’s voice. Master Anil’s mother, who was sitting on a chair, knitting, asked him to sing. Sehgal sang a popular Rafi number of those times: Mere dushman tu meri dosti ko tarse. She liked it so much that she told him to come to Bombay and stay with them once he grew up a bit. The mother happened to be music maestro Master Acchi Ram’s daughter.

Meanwhile, Sehgal would continue working in the cloth shop. But he never let his dream fade.

Finally in 1970, Sehgal spoke to his parents, and landed up at Master Anil’s house in Bombay. Initially, Sehgal would visit struggling musicians to seek work. “They would hit the bottle and then ask me to sing till late in the night.” This daily affair got the household worried, and he was ordered back to Ambala. There, the same old fate awaited Sehgal: cloth salesmanship. From Rs 50 a month, his salary rose to Rs 140 a month. And when a writer friend got him to join college, he spent all his time in the music room.

It was at college that Sehgal’s music teacher Chiranji Lal Jigyasu told him of his disciple Hansraj Behl in Bombay who had composed the famous song, Jahan daal daal par sone ki chidiya karti hai basera. Sehgal established contact with Behl, and found himself invited back to Bombay. The year was 1975.

Sehgal again stayed with Master Anil’s family (“I sent them a telegram from Ambala”), and Behl asked him to become his third assistant director. His first director was S Balbir, the original composer of the famous Punjabi song, Mein koi jhooth boliyan. After Balbir’s death in 1976, Sehgal was made first assistant. “I used to sing for big singers to make them understand the composition, after which they sang it,” he reminisces, “And all this while, I would wonder when I would get to sing myself.” He would not have to wait for very long. Serendipity struck.

In 1980, Sehgal was introduced to Jagjit Singh, who took a liking to him and helped him record his first-ever song, Tu kya jaane deewane, for a film called Raavan. It was the same day that Jagjit Singh recorded his legendary Honthhon se chhoo lo tum, mera geet amar kar doh.

Later, Sehgal got his very own album. It was titled Jagjit Singh presents Vinod Sehgal, but did not get very far. New voices were sprouting up all over at the time. After Mohammed Rafi’s death, singers like Shabeer Kumar and Munna Aziz were trying to take on his mantel, even as voices like Kishore Kumar’s made opportunities for newcomers harder to come by. “My whole concentration was on films and not shows,” he says, “And anyway, you need a lot of networking skills to get shows, which I didn’t have.” He got some work in Punjabi films, but that was not enough to get by as a singer.

After Maachis, Sehgal got a few breaks in offbeat films like Train to Pakistan and Dr Babasaheb Ambedkar. But Vinod Sehgal was growing older, the opportunities scarcer. Finally, he decided to turn back, and this time, for good. “I also wanted to take care of my parents who were ageing. It was also good that my wife, who felt quite left out in Mumbai, would be closer to her family.”

And so he returned. His father passed away in 2006, and his mother last January. In a small colony in Ambala, Vinod Sehgal lives now with his wife who must bear his ‘artistic temperament’. Luckily, he remains optimistic. “I am doing an album of Shiv Kumar Batalvi’s songs,” he says. And another album that includes an entrancing ghazal written by Pakistani poet Saleem Qausar.

The phone has stopped ringing. The wife has given up. And, in the moss-ridden hotel room that reeks of dampness, Vinod Sehgal begins to sing.

Let’s see who survives, go the lyrics, it’s the same arrow that’s hit us both.

I think of congruity.

I think of couples making love in other rooms… to the sublime sound of Vinod Sehgal’s voice. Surely, God cannot exist only on Pali Hill.