The Pose and the Portrait

The juxtaposition of two modernists, a painter and a photographer, from the subcontinent celebrates the confluence of cultural histories beyond nationhood 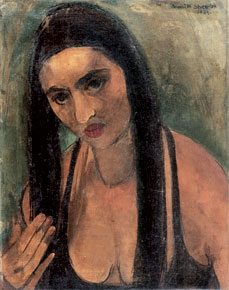 The juxtaposition of two modernists, a painter and a photographer, from the subcontinent celebrates the confluence of cultural histories beyond nationhood

Curator Shanay Jhaveri, in a new show at Jhaveri Contemporary, Mumbai, has two artists of the Subcontinent on view. Not contemporary artists, but two Modern artists, well-known in their respective countries, are up for re- examination. In similarities and differences, the show unfolds in many ways—artistically, historically and where the curator marries thought with expression in the display.

These two artists are Amrita Sher-Gil, Indian, and Lionel Wendt, Sinhalese. Both embody a particular time with the mere mention of their names. It’s with interest, therefore, to see them juxtaposed thus, recalling two nations poised on the tip of modernity, and artists in both nations grappling with the meaning of it all, in the surroundings they found themselves in.

In his curatorial note, Jhaveri intersperses his essay with readings by others and his own personal presentation. He starts with two images, each of which sets the tone for the exhibition: in the style that is contrasted and assimilated throughout —the medium juxtaposed and the returning artist turning his gaze to a country newly seen. Both, Wendt, a Dutch Burgher, and Sher-Gil, born of a Punjabi father and Hungarian mother, return to Ceylon (now Sri Lanka) and India respectively, around the same time, between the two Great Wars and during their country’s struggle for independence. New ideas and new identities were being sought, and both cast Western-trained eyes on the contemporary happenings around them in markedly different ways. Both sought to explore form and technique not in the spectacular of the Subcontinent but in the ordinary, leaving us decades later with images of the often marginalised then to ponder over now.

The two images at the entrance are Wendt’s Boy in a Sarong and Sher-Gil’s Two Women. Roughly the same size, Sher-Gil’s canvas seems an exploration of an idea. The photograph size of the canvas is a clever choice of the curator to show alongside Wendt’s boy, a well thought out image both in form and technique. It allows a quick register of style and thought that leads up to the rest of the show.

Sher-Gil’s work is well-known and well represented at the National Gallery of Modern Art (NGMA) in New Delhi. The works in this show sourced from private collections may not be iconic images that we recall in posters and postcards, yet the familiarity of her style is unmistakable and the canvases have that ‘seen somewhere’ look even if one hasn’t viewed them before. There are self portraits and paintings of women in ordinary settings. It’s Wendt’s photographs of the solitary that arrest one’s gaze; it’s not often that one sees his work, and even less often in India.

Lionel Wendt (1900–1944) hasn’t had quite the exhibitory trajectory that Sher-Gil’s works have enjoyed. An exhibition in 1994, ‘Lionel Wendt: Photographs’, held at the Lionel Wendt Gallery in Colombo, Sri Lanka, is believed to be the moment that interest in his work was revived. Jhaveri quotes researcher Manel Fonseka describing the moment as “pervaded by the ‘shock of discovery’”. Following this show, Wendt was noticed abroad, and, in 2003, the Fukuoka Asian Art Museum held a retrospective of his work, ‘The Gaze of Modernity: Photographs by Lionel Wendt’. Subsequently, this identification of the period and style of his works saw his “images appear alongside those of international photographers such as Man Ray, whose work exerted a direct influence on Wendt”, says Jhaveri. In placing Wendt alongside a Modernist working in India at the same time, Jhaveri seems keen to explore this aspect of the artist.

Certainly, Modernism was what drove Wendt’s practice. Wendt’s training in England as a lawyer and a pianist made him familiar with modern movements then taking place in painting and literature; Marcel Proust, George Bernard Shaw, TS Eliot, James Joyce, WH Auden, among others, held him. Unlike Sher-Gil—trained in Paris at the Grande Chaumière and then at the Écoles des Beaux Arts—who drew her practice more from the 19th century painterly influences, Wendt’s outlook was derived more from the 20th century, choosing the camera instead of the brush, ‘committing fully to the camera in 1932–33, a Rolleiflex at first, moving on to a miniature Leica,’ writes Jhaveri. Wendt’s earliest known photograph is of his friend, the painter George Keyt, dating from 1918. From 1928 to 1932, Wendt was ‘a major critical and organising force of the Modern Movement in Sri Lankan art’, writes Manel Fonseka in Modern Artists III—The Gaze of Modernity: Photographs by Lionel Wendt.

Jhaveri, in pitting photographs versus painting, draws attention to the then “newness” of both the artists’ practices. Wendt played with this modern media and all the techniques and subjects in vogue, with montage and solarisation, studio portraits and nudes, with maids and boys not for an anthropologist’s ethnographical documentation, but for experimentation and imitation: not so much Henri Cartier-Bresson in India, more Man Ray in a Ceylon studio/landscape, or adopting the poses of European Classical sculptures. Though Surrealism was a strong influence, there is a hesitance to leap into the truly bizarre—Wendt instead pushes the envelope more personally— in close-ups of the anatomy and sensuousness of the male form. The languor of the subjects reveals, in George Keyt’s words, that Wendt ‘was always in a state of conflict, and homosexuality, though a driving urge, did not satisfy him’. With his nudes of women, the slim sensuousness of the male nudes gives way to round plumpness in the models; there is more experimentation in the technique and composition; mirrors are used to bounce light and enhance contrast, props to explore scale and perspective.

In the second room, two images stand out—Sher-Gil’s Woman on Terrace and Wendt’s untitled portrait of an old lady. Both women are maids. Sher-Gil’s maid is animated with a raised hand, a conscious gesture by the artist who captures in the background a quotidian surround—children being watched over. Wendt’s studied portrait makes the maid a genteel memsaab, hand raised to support the face elegantly: in subject subversion, this is no ethnographical colonial recording but a Modernist in practice.

What is interesting in Jhaveri’s dialogue is how he posits Sher-Gil. This is the second time he has used Sher-Gil as a starting point in a refreshing way, away from previous historians’ starchy placing of the artist constantly within the Indian context, revealing instead her true complexities—her peers abroad; her, unknown to her contemporaries, facing the same dichotomies of birth and education and location. In 2013, for an exhibition ‘Companionable Silences’, he “conscripted” her into “intriguing conversations” situating her alongside Tarsila do Amaral, Saloua Raouda Choucair, Zarina Hashmi, Etel Adnan—who were artists who had lived or trained in Paris. Asked what made him re-examine Sher-Gil in this context, with others, Jhaveri expands, “Both ‘Companionable Silences’ and ‘In Dialogue’ are invested in mapping how distinct currents of Modernism, witnessed through the individual journeys and practices of certain artists, can be seen in relation to one another. At the Palais de Tokyo, it was done at a more global scale, and with the show at Jhaveri Contemporary, the remit is more regional. Sher-Gil in both was the starting point… The shows attempt to reveal the experience of the simultaneous sensations of imminence and distance. ”

He adds, “Sher-Gil has received a fair amount of attention, being considered in relation to Frida Kahlo, and within a national narrative, discussed in the same breath as Jamini Roy, Tagore and Raja Ravi Varma. I wanted to initiate a dialogue with someone from the region, and, by placing them in relation to one another, start to appreciate the kind of cultural modernity that was playing out in and around South Asia at the time.” Further, in choosing Wendt, rather than a painter, Jhaveri highlights the more historical aspects of photography as an art form being introduced in Sri Lanka, as most experiments in Modernism at the time were being played out in painting.

Jhaveri Contemporary is a small gallery. Yet the thoughtful display in this small space shows a generosity of spirit and an inclusiveness that goes beyond nationhood—before globalisation became a catchword. It provokes one to think of trajectories that ‘newness’ takes and with a retrospective gaze dismantles the new otherness of the time—in that, within the artist’s expression and the viewer’s gaze, the curator makes one re-imagine practices, images and histories embedded in questions and the leftover languor of the pose and portrait.

(The exhibition ‘In Dialogue: Amrita Sher-Gil and Lionel Wendt’ is on at Jhaveri Contemporary, Mumbai, till 25 October)