The idea of duality, in their Asian-British heritage as well as their influences, is central to the work of the Singh Twins 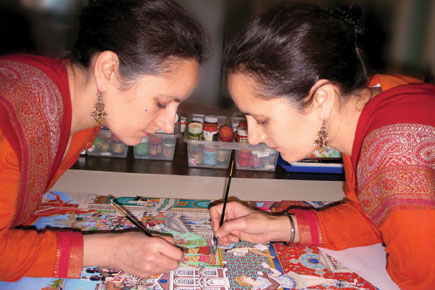 The idea of duality, in their Asian-British heritage as well as their influences, is central to the work of the Singh Twins


For artists Gilbert & George, the grimy East End of London serves as a wealth of artistic inspiration. This collaborative duo, known for wearing identical formal suits and who are rarely seen without each other, has created a wide range of idiosyncratic works—from unusual ‘living sculpture’ performances involving multi-coloured metallic powder and song to controversial large-scale photo works of skinheads and ‘Pakis’. The Singh Twins, while coming from a wholly different ethnic background, work in a similar fashion—although, rather than singing on tables and smearing canvases with various kinds of bodily fluids, their medium is the more traditional form of painting.

Yet, for both, there is a strong umbilical connection to a particular place. While Gilbert & George feel “nothing happens in East End that doesn’t happen in the world”, Amrit and Rabindra celebrate Liverpool’s uniqueness, its maritime history and transformation from a trading port city to a culturally diverse, artistic centre of Britain. The Making of Liverpool: Portraits of a City, comprising an exhibition of selected works, the screening of an animated film Art in Motion and a book launch, is the Singh Twins’ homage to home. “[It] is the place [where] we have grown up and worked most of our lives—so there is an emotional attachment and personal associations, which naturally gives it a special place in our hearts,” they explain. Even though they were born in London, in Liverpool there is definitely “less of a rat race” compared to the capital, but more than that, “Liverpudlians (as the ‘locals’ are known) are also very welcoming and down to earth, with a great sense of humour. Which [we], as Punjabis, definitely relate to.” It’s a feeling that’s clearly reciprocated, with the sisters being appointed ‘honorary Scousers’ (people who, though born outside the city, have made a tremendous contribution to the life of its citizens) by the Mayor of Liverpool in 2009.

Their love for the city weaves its way into their intricate paintings, which are a witty, distinctive blend of traditional Indian painting and contemporary Western influences. It’s an engaging style that employs frame within frame of delicate floral and abstract patterns, flattened perspective, vibrant use of colour and traditional portraiture along with a liberal blend of references to popular culture—from McDonald’s to the Power Rangers—and world politics. All the while, their work seeks to challenge existing ethnic stereotypes, and redefine generally accepted narrow perceptions of heritage and identity in art and society.

While the Singh Twins may have carved themselves a niche within contemporary British art, it hasn’t always been easy. “Growing up in Britain and during our art degree [in the late 1980s] there was a lot of pressure to conform to Western values and role models,” they say. “We were presented with what we felt to be a false perception of [a] divide between East and West—with Western culture generally being equated with being civilised, educated, modern and progressive, and, conversely, traditional Eastern culture with being backward, outdated and having no value or place in contemporary life. Our art tutors, on that basis, dismissed our own art, which is rooted in the Indian miniature tradition. We set out to challenge this through our work…”

This note of quiet, adamant rebellion has paid off—last year, as part of their Contemporary Connections programme, the National Portrait Gallery in London held a solo exhibition of works by the Singh Twins alongside a show on traditional Indian portraits. Earlier this year, they were both awarded MBEs in the Queen’s Birthday Honour list for their contribution to the Indian miniature painting tradition within contemporary art practice.

The paintings in The Making of Liverpool… naturally centre around their creative and cultural connection to the city. A vibrant example of this is Painting the Town Red, a work set against the city’s distinctive Roman Catholic and Anglican cathedrals and the famous Albert Docks. Crowded in front of it are figures and events from popular Liverpool culture—football players holding a trophy atop a vehicle followed by a merry band of fans, which includes a Punjabi family, a Chinese New Year dragon and a BBC Northwest TV crew. The foreground is dominated by the blue swirling waters of the Mersey River, crowded with boats from the Tall Ships Festival. The work was commissioned for an exhibition on the theme of football, but the multiplicity of narratives within the frame transforms a mere celebration of the sport into a careful, precise and humorous exploration of the city’s multi-ethnic communities within a British context—while still displaying traditional attire and attributes, they participate fully in the festivities. As the artist text on the work explains, ‘It seeks to challenge the usual images of cultural confusion generally projected by the mass media, which present young Asians with the dilemma of having to choose one culture over the other.’

This idea of interconnectedness between tradition and modernity, East and West, is what the sisters like to call “Past Modern,” a term which they say, “asserts the equality of global cultures past and present and the continuing relevance of tradition in modern life and art”. It is also, they explain, a play on the term “Post-Modern,” which alludes to what they experienced as the hypocrisy of an art world that boasts of modernity and innovation while rarely recognising (even dismissing) the traditional and non-Western cultures that influenced it.

Both interconnectedness and innovation play a major part in the Singh Twins’ works, the latter having helped them broaden their repertoire to include animation—Art in Motion: The Making of Liverpool (which won a Creative Media Award at the Spinning Wheel Sikh Art and Film Festival in the US in 2008)—and bring 800 years of Liverpool’s history to life. The short film is inspired by one of the artists’ most famous public commission paintings, Liverpool 800: The Changing Face of Liverpool, officially unveiled to Prince Charles on the occasion of Liverpool’s 800th anniversary in 2007.

“This is generally what The Making of Liverpool… is celebrating,” the twins say, “how [their] personal impact on the city is just part of the significant, positive influence that the Indian community as a whole has had on wider British life and history.”

While the idea of duality is central to their work—the blending of influences, their Asian-British heritage and the harmony and conflict that arises from it—Amrit and Rabindra are intent on questioning it when it comes to themselves. They prefer to deconstruct the “cult of the individual” by dressing alike and rarely appearing one without the other. They explain, “As twins, the concept of duality, or rather, the attempt of Western society and the modern art world to impose duality on us (in terms of insisting that we follow different interests and express ourselves as separate entities in order to comply with their definition of, and the importance they place, on the concept of individuality), has shaped our whole working practice. We present ourselves as ‘twindividuals’ rather than individuals, as one artist and a united front—with common influences, goals and vision for our work.” And while many people may think twice about working with their siblings, the sisters say they would not want it any other way. “We are each other’s most ardent supporters, but also harshest critics when needed.” Considering how consistently they produce inspiring, challenging works, this seems to be, as a true Liverpudlian would put it, “pretty darn boss.”

The Making of Liverpool: Portraits of a City will show at Art Alive Gallery, New Delhi, from 18 September to 20 October