The Lullaby That Led to a Dream 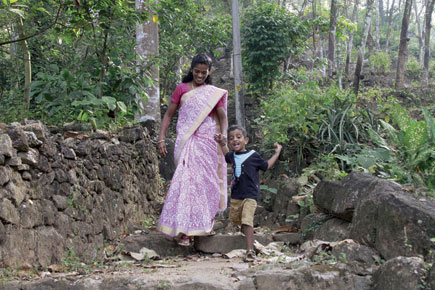 Inside a rented Ambassador cab parked halfway through a playground in Kollam, somewhere behind the makeshift stage where she is scheduled to perform in another half hour, 34-year-old Chandralekha Adoor finally finds some time for my questions. The conversation begins with a yawn for which she begs my pardon: “I have had a very long day. I woke up at 5 in the morning, travelled to Kochi for a shoot and then travelled all the way to Kollam for this function and tomorrow morning, at 5, I have a flight to Bahrain.” She looks at her watch: 11 pm.

Chandralekha, 34, is used to waking up early. Till about three months ago, she would rise at 5 am in her thatched home in Vadasherikkara, Kerala, to the shrill wake-up call of the neighbour’s rooster. She would draw water from the well and sauté vegetables for her husband Reghunath’s lunch. Reghunath works as a Life Insurance Corp (LIC) agent in the small town of Pathanamthitta. She would bathe and feed her toddler son Sreehari before dropping him off at the nearby anganwadi school and return home to her chores. She washed the dishes, swept the front yard, all the while humming to herself, sometimes in sync with songs from the TV soaps her mother-in-law would watch inside the house.

This was before YouTube blessed her. At a family get-together for Onam in 2012, Chandralekha’s brother-in-law, Dersan VS, shot a video of her singing Rajahamsame, a popular two-decade old Malayalam film song originally sung by KS Chitra. She sang so well that the clip became an internet rage and turned Chandralekha’s life around.

Today, her itinerary is packed. She has already sung in two feature films (Love Story and an untitled Tamil project) as a playback singer. Her main concerns now revolve around missing a flight, or the traffic blocks that might delay her as she shuttles north and south of Kerala performing stage shows. She still enters her kitchen early morning, but household chores have now moved a step lower on her priority list. The first task of the day is filling her thermos flask with hot water, boiled with a piece of dry ginger.

In the life-changing YouTube clip, Chandralekha’s hair is tied into a messy knot. She has a towel on her left shoulder and her son on her hip. She sways to and fro as she sings a cover of Rajahamsame. Sunlight filters in through a bamboo curtain from behind her, and in the backdrop, we hear vehicles pass by and the incoherent muttering of kids. Just another afternoon in the life of a housewife.

“It was during Onam,” says Chandralekha, “We were at a relative’s place and my brother-in-law, Dersan VS, asked me whether I could sing a song. This wasn’t new. During most family get-togethers I am made to sing, so without a second thought I sang my favourite song. About the rest, I am clueless.”

It all started with Dersan’s curiosity of his new Nokia C503 phone. “I just wanted to check the video recording and audio clarity of my new phone,” he says. “When I shot the video, I wasn’t thinking of uploading it anywhere, I just wanted my friends to hear how amazing her voice is.”

As an animator, Dersan was familiar with much more than email, Facebook and YouTube. While doing his sketching or colouring, he would listen to Coke Studio Pakistan on YouTube. Hoping to launch his version of this music show on YouTube, which he proposed to call FolkStudio, he recorded videos of a couple of friends and relatives who sing well. One of these was Chandralekha’s. For a YouTube video to go viral, a messiah is a must. For instance, Rebecca Black’s Friday was just another home-video until the comedian Daniel Tosh decided to post a link to the video saying ‘Songwriting isn’t for everyone’. That set the clicks rolling. Friday now has 200 million hits.

For Chandralekha, the messiah wasn’t a celebrity but a community. First uploaded on YouTube on 22 September 2012, the song managed just 412 ‘likes’ in one year. “The video did a couple of rounds on Facebook, mostly among friends, then was forgotten,” says Dersan. But on 1 October 2013, a non-resident Indian named Praveena shared it on her Facebook wall, after which the video went viral and was shared approximately 300,000 times on Facebook in just three days.

“Someone named Prakash PK downloaded the same video, reposted it on YouTube on 12 October 2012 with advertisements. He has 700,000 hits, and he is sure to have made a lot of money from it. But what matters is how it helped Chandralekha reach music lovers.”

About 883,300 of the nearly 1,750,000 Indians in the United Arab Emirates (UAE) are Malayalees. A majority of them would shed a tear at the mention of paddy fields, monsoons or payasam. It was perhaps the unaffected air of a Malayalee housewife, the brick walls of her kitchen and her traditional voice that reminded them of lullabies back home. Prashant Pillai, a pravasi (expat) from Qatar who hasn’t been home for three years, says, “It was during a Saturday night booze party that a friend first mentioned this housewife-turned-singer he had heard on YouTube. The entire night, we played her song on repeat, longing to be home. Her voice has that ache that resonates with our homesickness. Nowadays, when Shreya Ghoshal is singing most Malayalam melodies, to hear something so soothingly familiar was a unique experience.”

Kevin Allocca, trends manager with YouTube, says, “We all want to be stars— celebrities, singers, comedians, and when I was younger, that seemed so very very hard to achieve. But now, web video has made it such that any of us, or any of the creative things we do, can become famous in some part of our world’s culture. Any one of you could be famous on the internet by next Saturday. But there are over 48 hours of video uploaded on YouTube every minute. And of that, only a tiny percentage ever goes viral, and gets tonnes of ‘views’ and becomes a cultural moment. So how does it happen? Three things: tastemakers, communities of participation and unexpectedness.”

Chandralekha was not on Facebook. The viral compliments were merely hearsay to her until she gave away her phone number in the video. “The phone has literally not stopped ringing [since],” she says. “There have been calls from abroad, from the media, from musicians and from music lovers.” On 31 October last year, Chandralekha signed her first playback song for the Malayalam film Love Story.

In the Ambassador cab, Chandra remembers the time she would cross her arms and coyly sing old Malayalam songs at school and family functions. “They have all always praised me, my parents, relatives and teachers,” she says. Midway through the sentence, she hums few lines of her favourite Lata Mangeshkar song, Aa jaa re pardesi from Madhumati, for which she used to eagerly tune into Vividh Bharati. No one thought of sending her to a music school or finding her a tutor. After her father’s death, her mother brought up five kids, including Chandralekha, on the little that she earned by weaving cane baskets. Music was a luxury. As a little girl, Chandralekha spent hours by the radio listening to kacheris (classical concerts) and hymns chanted in local temples during festivals.

Apart from being a pilgrim stopover on the way to Sabarimala, Vadasherikkara is a small town with not much to flaunt. It is not a surprise that she did not have email or Facebook accounts. “Even now, I do not own a computer or manage my Facebook page, I have a couple of old classmates who help update the page and they do this from their homes,” she says. Getting a laptop is something set aside for later. For now, she is looking to move to a better location in her town, a place that is more accessible.

One might think Chandralekha owes her celebrity status to social media, to YouTube and Facebook, but she believes otherwise. “The video was there for about a year on YouTube with only a few hundred ‘likes’, but what changed it was the love and support of pravasis,” she says. From someone who did not own a passport to someone who has visited the UAE four times in December, she has seen her life alter dramatically. Her family’s life has changed too. “I don’t travel alone. My husband accompanies me and my son too. Most of the time, my brother-in-law is invited too.”

Before YouTube made her famous, Chandralekha was a history graduate trying to get a modest government job. If all this goes away just as it came, she’d be more than happy to get back to singing lullabies for her son. Not everybody can be a Justin Bieber. There is a new YouTube video going viral every other day. But how long might an internet sensation last? What’s her shelf life?

“She is a down-to-earth girl with a pleasing voice. So what if she hasn’t learnt singing, there are many in the film industry who haven’t,” says Hariharan, who has sung a duet with Chandralekha. “She is no different. Why bother about shelf life as long as she is in the limelight? Let’s enjoy her singing.”

Chandralekha says, “I am still a housewife. This sudden fame hasn’t changed much. It has just made everything more hectic. What has happened to me is like winning a lottery. I would have no ache even if it just ends one day because I already have more than what I wanted. All I know is that this has made it possible for a housewife to see a recording studio, sing with celebrities like Hariharan and Chitra, get on a flight and see the world. I would finish my chores early to watch musical reality shows. I never considered sending my name for them, I was too simple to be on television,” says the singer whose New Year resolution is to enroll for music lessons. “Classical, of course.”