The Lives of Others

Geetu Mohandas, director of India’s official pick for the best foreign film Oscar, on what drew her as an actor to the other side of the camera 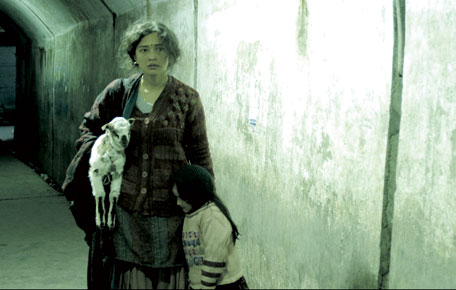 Geetu Mohandas, director of India’s official pick for the best foreign film Oscar, on what drew her as an actor to the other side of the camera

‘Life is not all about Physics.’ Among the hundreds of messages in her inbox, this was the most precious one for Geetu Mohandas, director of Liar’s Dice, India’s official pick for the Oscar in the Best Foreign Language Film award category. The message was sent by her Physics teacher in school. Mohandas rates herself an average student who never received accolades or attention from teachers, and Physics was her undoing; it made young Mohandas feel she was not good enough. When she got this message after her film was chosen for the Oscars, it felt like the only validation that really mattered. “Now I am confident that I can even teach my daughter Physics,” she opens up during the conversation.

Mohandas does not think that life is all about filmmaking. She was among the celebrities who staged a protest last month in Kochi in solidarity with the struggle of Adivasis demanding the restoration of their land. Neither a filmmaker nor an actor can stand aloof in the face of hardships that human beings face, she believes. Her two films as director reflect her philosophy, and are a closer look at the extraordinary lives of the country’s ordinary masses and their struggle for survival.

The child artiste-turned-actor-turned filmmaker started her film career at the age of four in a Malayalam film Onnu Muthal Poojyam Vare (From One to Zero) in 1986. Mohanlal had the lead role. She won the hearts of Malayalam filmgoers as ‘Deepa mol’, a widow’s daughter who lives a lonely childhood looking for her father’s love in an anonymous telephone caller. As she looks back at the film, for which she won the state award for the best child artiste in 1986, she describes it as “unbelievable”; “I was a very moody child. Everyone in the team had to wait for my mood swings. I don’t know how they made me do that role,” she says.

She has some vague memories of the making of that film. “I do remember, they made me sit in front of a big mirror after prompting me with the dialogues. I remember delivering the dialogues to myself in the mirror. It was nothing like merging with a character and acting. I was only mimicking what I was shown.”

The memories of being handled by elders in the process of making of a film helped Mohandas in her first directorial venture , the short film Are You Listening, which premiered at the Rotterdam Film Festival in 2010 and gained international acclaim. The film depicts the imaginary world of a four- year-old girl born blind, set against the fast changing world around her. Her zest and fascination for life is communicated through a fly and a cat that are part of her imaginary world. “Hasna was a kindergarten student at a blind school in Aluwa. She was an extremely brilliant girl and was internally very strong and steady despite being blind. I think I had the patience to handle children in both my films because of the memories of being part of a crew in which everyone was so caring and loving,” she recounts.

The short film set her off towards making a feature film, a dream she had cherished for long. The script of Liar’s Dice had been ready even before the making of Are You Listening, but there was the usual hurdle that young filmmakers face: the raising of finance. The recognition she received for the short film gave her access to an international film circuit that made Liar’s Dice possible. The film follows Kamala, a young woman from Chitkul village in Himachal Pradesh, and her daughter Manya. Both embark on a journey, leaving their native land in search of Manya’s missing husband, a migrant worker in Delhi. Along this journey she encounters Nawazuddin, a free spirited Army deserter who helps them get to their destination, though with his own selfish motive in mind.

“This is a simple story which has a political undercurrent,” says Mohandas of her movie, which throws light on life’s complexities for India’s working class and the ramifications of migration to urban spaces. “Migrant workers in the country exist only as statistics in this era of globalisation. Their lives are undervalued, their relationships are not counted.”

“I did not give detailed instructions to the actors. I had a skeletal script and I explained them the situations. They have done [their roles] in their own style. I am lucky to have brilliant actors like Geetanjali Thapa and Nawazuddin Siddiqui who were capable of doing it their own way. It was an organic way of making a movie—which I enjoyed thoroughly,” she says. And she wasn’t too worried about how it would be received. “I did the movie and completed a long cherished dream, the rest comes as it may.”

Liar’s Dice had stiff competition on its way to the Oscars, and beat 29 other films, including Mary Kom, Shahid and Queen. Mohandas and her team have already won accolades for Liar’s Dice across prestigious festivals like the Sundance Film Festival, International Film Festival Rotterdam and Sofia International Film Festival, Bulgaria. Geetanjali Thapa, who plays the film’s lead role, has won the National Award for best actress, and Rajeev Ravi, the cameraman, co-producer and Mohandas’ husband, won the National Award for cinematography. “Becoming a director was always my dream,” Mohandas says of their partnership, “but it has become a reality because of Rajeev Ravi’s presence in my life. I had the passion and drive, but he was the person who truly guided me. I met him at the age of 19, and I must say that I grew up with him. I honestly believe that he has really shaped me.”

Rajeev Ravi, an acclaimed cinematographer and director, graduated from the Film and Television Institute of India, Pune. His cinematography career began with Madhur Bhandarkar’s Chandni Bar (2001). Ravi had assisted directors in a couple of Malayalam films before he headed for Bollywood, where he has worked with Anurag Kashyap. He shares his wife’s philosophy on the need for political cinema. Mainstream Hindi cinema, Ravi says, offers nothing that is challenging: “It is easy to find a place in Bollywood and make money, but it is not what I want to do.”

In Ravi’s view, Liar’s Dice is an attempt to cinematise the lives of ordinary people—their everyday struggles that better-off India knows little of. The Sundance Festival, on its official webpage, hails the film as one that ‘examines the ominous undercurrents in contemporary working class India, allowing the locations themselves to play a key role in the story.’

Mohandas took a lengthy break from cinema after she starred in a couple of Malayalam and Tamil films as a child. Her parents did not want to interrupt her education. She went on to study in Malaysia and Canada as her father was posted abroad. She attributes her interest in art and culture and theatre to those years and the system of education she was exposed to. She made a comeback in cinema at the age of 20 in a Mohanlal movie, Life is Beautiful, directed by Fazil. She is not apologetic about her dalliance with commercial Malayalam films. “I enjoy all sorts of films. I don’t believe in the division between art-house cinema and commercial cinema. As an actor, I have to do what my director wants,” she says candidly.

Even while she was in the limelight as an actor, Mohandas was already dreaming of making her own films. She wanted to be on the other side of the camera. “I would rather give orders than take them.”

She started off as a script writer before graduating to direction. Since early childhood, the atmosphere at home was about self-expression, reading and writing. “My mom used to write letters, that was the mode of communication. Whenever we had some quarrel, she used to write letters that would begin with, ‘Dear daughter…’ and she would keep them here and there in the living room or kitchen. Her letters ignited my passion for writing,” reveals Mohandas. She wrote her first script at the age of 16. “I still have it with me; it is more like a synopsis of a feature film.” Going through it again now, she realises how deep her passion for filmmaking was even as a teenager. One memory that she cherishes from her growing up years is a meeting with poet Kamala Das. She was in class 9 and had to interview a writer as part of her project work. She chose Kamala Das. “She talked to us for almost 45 minutes, about love and relationships, which was so inspiring. I was studying in a school in Kochi. I wrote a very detailed note on the meeting with Kamala Das. The teacher was worried and admonished my father to keep an eye on the kind of books I read. She told my father that I was writing in a way that a girl of my age was not supposed to. My father did not agree with her and told her that he was proud of his daughter.”

Mohandas, the filmmaker who hates film reviews, interviews and media hype, believes that your cinema is your statement. Even for Liar’s Dice, she is not planning any promotional gig and is sure that the film will speak for itself.

She is generally reluctant to give interviews because the media is always interested in private affairs, especially that of women. “I am often asked questions like whether I cook well and how I manage time to take care of my family. These interviewers never ask men such questions. It is strange, my culinary skills have nothing to do with my cinema,” she concludes, with her usual mix of off-handed frankness and practical wonder.