An evening with an alleged ‘mind-reader’ 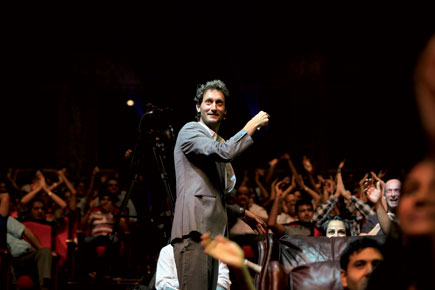 An evening with an alleged ‘mind-reader’


Lior Suchard is a jovial young man from Israel who appears to repress a great desire to burst out laughing. He says he can bend spoons and move objects with his mind—he can probably think too, but he draws attention only to his seemingly paranormal acts. Over the years he has acquired reasonable fame around the world. Two years ago, at a performance organised by Barbara Streisand, he ignored a direct request by the American secret service not to engage with Bill Clinton in the audience. Suchard asked Clinton to think of a two-digit number and guessed it correctly. (It was ‘61’).

Journalists in several countries, including India, have described 31-year-old Suchard as a ‘mind-reader’ and a master of ‘telekinesis’, which is one of those words that people think has meaning because it ends with ‘sis’. He was in Gurgaon in August, and as is the practice these days with such men, he got to hold a corporate workshop on how to improve the mind. There were about 50 charmed business executives in the room, whose companies had paid Rs 16,000 per mind. Most of the executives were from Nokia. It was one of those things Apple would never have done. Suchard gave a lecture about the mind, then walked among his audience and picked a young woman and a middle-aged man.

He took them to the stage. He asked for the woman’s watch and gave it to the man. Then he asked her to think of “the time, any time; it need not be just 1 o’ clock, it can be 1.10, 1.20.” He asked her to write down the time on a piece of paper. He then asked the man to shut his eyes and keep turning the crown of the watch, winding the needles. Suchard asked the woman to tear the paper on which she had written the time and throw the pieces away, and asked the man, whose eyes were still shut, to stop winding the watch. Then Suchard wrote something on a white sheet, and walked down the hall so the woman could not see what he had written. He showed the sheet to the audience. It said ‘3.45’. He asked the woman what time she had thought of. She said, “3.45”. And the man, whose eyes were now open, looked at the watch he had been winding. The time on the watch was 3.45. “And what is the time now?” Suchard asked everyone. It was 3.45.

The assembly was stunned. In another time, in another place, Suchard could have become god.

When the workshop ended people milled about the young woman and she appeared to agree that what they had just witnessed was “incredible”. But she did not linger too long in any huddle and waited on the sidelines of the small hall with two female acquaintances. Her watch appeared to be a regular analog watch. I asked her if she too was from Nokia.

“No,” she said, which explained why she did not appear to know many people in the workshop.

“Where do you work?”

“You spent 16,000 rupees yourself to attend the workshop?”

Suchard, who lives in Tel Aviv, looked tired and bored when he sat down for the interview. He showed me a page of a sketchbook on which he had just drawn a big circle. “You see this circle?” he said and withdrew the sketchbook to his chest, guarding it from my sight. “Can you tell me a two-digit number?” he said.

He showed me the page; it had ‘13’ written inside the circle. It did appear that he had written the number before I said it. And it seemed that he had shown me the page an instant after I had said “thirteen”. But in the recording of the interview the moment was actually much longer. When I had said “thirteen”, he had said, “Thirteen? You see I did this just for fun… I wrote here.” He had shown me the page not in an instant, but three seconds after I had revealed the number to him.

Suchard said he had manipulated my mind and influenced me to say thirteen.

What is the most common two-digit number people think of?

“22,” Suchard said without a moment’s doubt.

Are you a magician, Lior?

“I am not a magician. Magicians use tricks. And gimmicks. I use the power of the mind.”

He asked a passerby for his spectacles. He then placed them on the floor and made them roll without touching them. “I used my mind to move it,” he said. Many years ago, the magician James Randi, who investigated several claims of psychics, exposed this trick in a television duel with James Hydrick, who claimed he could move objects with his mind. After Hydrick moved a pencil without touching it, Randi did the same to the pencil. Randi said the movement was caused by manipulating “the currents of airconditioning in this studio.”

Should all magicians speak the truth? Without lies how can they create powerful illusions? If a young man lies about his paranormal powers purely to entertain and earn an income in a world filled with people who are ready to believe him, is he a fraud? “I don’t heal diseases,” Suchard said, as if that was where he drew the line. But he does sell a pendulum that he claims will make people use their own minds to feel better.

What is the most important thing you know about people?

“They want to believe.”

What is your favourite trick?

He did not fall for that one. “I don’t do tricks. I call them experiments.”

What is your favourite experiment?

“Choosing a random person in the audience and guessing her first love.”

Suchard’s stage manager is his wife, Tal Schachter, who, like all wives, is not in awe of her husband. He was performing later in the evening and she appeared to be busy—barking orders into a mobile phone, supervising the packing of objects and walking hastily up and down the hallway. But when I stopped her for a chat on one of her hurried sorties she turned pleasant and her movements slowed down. She told me ‘Tal’ in Hebrew means, ‘morning rain’. She is a ‘fashion PR’ professional back in Tel Aviv, but travels with Suchard for his shows. She met him when she was working as a waitress in Tel Aviv, in a café called Toot, “which means strawberry” (it can also mean any berry). Suchard was a frequent customer. “He guessed my phone number, and started calling me.”

Life with Suchard, she said, “is not a natural life, obviously. I have met Barbara Streisand, Tony Blair, Bill Clinton…” In England, she met Uri Geller, the first among spoon-benders and a man who is revered by those who believe in the paranormal powers of the mind even though he was famously exposed on several occasions, including on The Tonight Show when James Randi and others confronted him with cutlery brought by them. Geller could not move or bend the objects. But his reputation is not diminished among those who are sceptical of rationality.

“It was wonderful to see great minds together,” Tal Schachter said about the meeting of Suchard and Geller. “Sometimes they didn’t even have to talk.”

It is in the natural order of things that married couples are accomplices. And Suchard, more than other men, regular men, has excellent reasons never to antagonise his wife. She knows too much.

That evening, at the Kingdom of Dreams in Gurgaon, which holds an auditorium that can seat more than 800 people, Suchard performed to an almost full house. Official ticket prices ranged from Rs 900 to Rs 5,000. He called a girl from the audience to the stage and appeared to guess her mind correctly. He did many variations of this trick, and in every case the person called to the stage had to write down the number on a piece of paper for Suchard to ‘mind-read’. He called a couple to the stage, asked the woman to shut her eyes, and every time he touched the man—on the face or hand—the woman thought Suchard was touching her. He made the woman hold a pendulum that he said he had designed himself and convinced her and the audience that it was obeying the commands of her mind.

When the show ended, people shuffled out, most of them whispering their amazement. At the exit there was a stall that sold Suchard’s book on ‘mind-reading’ and the pendulum, for Rs 1,000 each. A crowd grew around the stall. People flipped through the pages, held the pendulum with their eyes shut. Then they began to buy.

Tal Schachter stood in the shadows and watched with a smile on her face.

In this world, she and Lior Suchard deserve everything they get, especially the money.