The Heir Is on Air

Comedian Johny Lever tried to keep his daughter Jamie J away from the glare of showbiz, but she was too talented to ignore 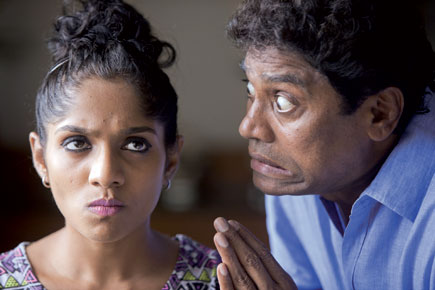 Comedian Johny Lever tried to keep his daughter Jamie J away from the glare of showbiz, but she was too talented to ignore


If veteran comic Johny Lever had his way, he would have kept both his children, daughter Jamie Janumala, 25, and son Jesse Janumala, 23, at arm’s length from the vagaries of the entertainment industry. He almost succeeded with Jamie. Till August 2012 she was a marketing executive at the London-based market research agency Visiongain with a passion for music, theatre, dance and, not surprisingly, stand-up comedy.

Jamie’s predisposition to the arts was no secret to her father. In the 10th standard she failed seven subjects and topped every talent contest at Mumbai’s Jamnabai Narsee School. But abandoning her education was not an option Johny Lever allowed her. She completed her Bachelor’s of Mass Media from Jai Hind College, and then did a Master’s in marketing at the UK’s University of Westminster.

In early 2012, when Johny Lever was touring London, he tested Jamie’s mettle by granting her a 10 minute-spot in one of his stand-up shows at Watford Colosseum. He advised her to prepare an act different from his. She spoke about her experience in London, her observations of the locals as well as Indians settled there. The local flavour to her act resonated with the thousands of desis in the audience.

“I had to struggle a lot and I didn’t want my daughter to go down the same path,” Johny Lever says over the phone from Bangkok, where he is shooting a film.

“She kept sending hints through her mother [Sujata Janumala] about wanting to perform, but I insisted she study because I never had that option. Par main majboor ho gaya uske talent se (‘but I was compelled by her talent’).” In July, Jamie, who now goes by the name Jamie J, made her television debut on one of Sony’s longest-running shows, Comedy Circus Ke Mahabali. At the audition, the judges were impressed by her impression of Asha Bhosle singing the 70s chartbuster One Two Cha Cha Cha, an act she says she never gets wrong. A student of classical music since the age of 10, Jamie says her training helps her imitate singers.

She has already been asked by the show’s makers to mimic her father in close to four episodes. As preparation, she has been watching videos of his shows to learn how he pops his eyes out, his gestures and his way of using his voice. “I’ve never copied my dad before. They just assumed I could do it and kept incorporating it in the script. I guess it works because I look just like him,” says Jamie.

Even off the show, her abilities are constantly put to test. Every now and then people stare at her expectantly till she says something that cracks them up. “When people meet me, they want me to be funny like my dad. And I get scared because what if I’m not? I’m sure a lot of people think ‘This girl is Johny Lever’s daughter and she’s not even funny’. I guess I’m still not that spontaneous. I need some time to prepare,” Jamie says.

As children, Jamie and Jesse (an assistant director on Dharma Productions’ Gori Tere Pyaar Mein starring Imran Khan and Kareena Kapoor) saw little of their father. He was like the elusive Santa Claus who crept into the house late at night with gifts from travels abroad and then vanished the next morning.

They saw more of him in the movies.

Jamie’s favourite is Baazigar where Johny Lever plays the absent-minded servant Babulal. “I can’t stop laughing at him in that movie. I have many videos from the film on my iPad and watch them from time to time. I think people can never forget dialogues like ‘Anarkali ka phone tha; ice-cream khaana zaroori hai (princess Anarkali called; it is mandatory to eat ice-cream)’.”

As you enter the Lever household in Mumbai’s Lokhandwala area, a series of life-size cut-outs of Charlie Chaplin jump at you in the corridor. They are the only contribution Lever made to the home when his wife renovated it a few years ago.

Jamie remembers watching her father writing scripts and rehearsing with his orchestra at home. He’d often run his fresh batch of jokes by her to test them. “He always tells me that while doing comedy you have to think a little tedha (twisted). They say comedians always have to be a little kamina (mean). The key to being a good performer is observing people around you. He says everybody has something funny about them.”

Like most comics, Jamie feeds off people with peculiarities—it could be a unique accent, the way their voice breaks when they speak, or a distinct mannerism.

She’s yet to find a favourite haunt for scouting subjects but the two places that have never disappointed her are Elixir Gym near her house and the New Life Fellowship Church in Oshiwara. “Every Sunday I meet at least 10 people at the Church that I can imitate. It’s a great place to pick up accents. I learnt the Malayalee accent from an old aunty I keep meeting there. Even gym trainers are usually very funny. I just got a new one and I keep observing him. It is clear that he doesn’t know much English but he speaks it anyway to impress customers,” says Jamie.

Compared to Johny Lever’s early years, Jamie has had a relatively pain-free start to her career. During her three-year stint in London, she performed in two musicals—Exodus and Rehab—and after her return, had a successful two-month run at The Comedy Store in Mumbai. Along with shoots for Comedy Circus, she makes time to act in plays, the most recent being Raell Padamesse’s stage adaptation of Grease.

“Aaj kal log ek second mein famous ho jaate hain (these days it takes a second for people to become famous). I had to do almost 1,000 shows before people started noticing me,” says Johny Lever, whose original name is John Rao Janumala. Before his film debut in 1981, he juggled a variety of odd jobs to make ends meet. From working as a small-time labourer at Hindustan Lever (from where he adopted the name Lever) to selling pens on city streets in different actor voices, to participating in local dramas, he grabbed every available option to make an extra buck.

“In the 1980s the entire nation was talking about my audio cassettes. That helped me get film offers. I was nervous because I only knew how to mimic people and not acting. People took me seriously only after Tezaab released, but no one realises that by then I had already spent many years in the industry. Even now I feel there’s so much more to learn. I’ll always be a student,” says the 56-year-old.

The scars of his battles are still fresh in Lever’s mind and he likes to keep it that way. He narrates stories of his days of poverty to Jamie. “I may be a comic but I’m a strict and serious person. Jamie’s been born with a silver spoon. I keep telling her about my past so that she remains balanced,” says Lever with a tone of finality.

Jamie says her father loves being able to provide for his family. “It’s amazing to see where he has come from. He’s used to having a hand-to-mouth existence. Being the eldest in the family, he always had to support the rest. Even now, though I’m earning, he likes to pay for everything. He feels I should save everything I get,” says Jamie. She can’t reveal her pay but says she gets compensated on a per-episode basis. Besides, she has income from multiple sources.

As of now, Johny Lever has no plans of performing with Jamie. He says he might consider it in the future, depending on how she shapes her career. Even on her recent performances on Comedy Circus, Lever offers measured praise. He lauds Jamie’s comic timing but then quickly adds, “She’s got a long way to go.”