What sets her apart, says Vidya Balan, is her need to grab roles that demand what few others can deliver 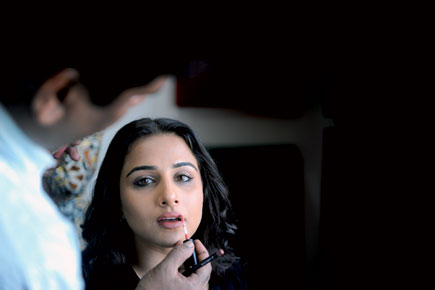 What sets her apart, says Vidya Balan, is her need to grab roles that demand what few others can deliver

When film director Milan Luthria first started shooting The Dirty Picture in Mumbai’s Filmcity with Vidya Balan in its lead role, he felt something was not right. After four days, he called off the filming. Just a couple of scenes had been shot—about the early life of her character Silk Smitha—and he wasn’t too happy with the outcome. While he immersed himself in what was going wrong, Luthria recalls, Vidya Balan kept calling him: “She thought she was doing something wrong.” And then it hit him. “I realised that Vidya was looking too beautiful for the role. We got the make-up guys back and changed her look, her skin tone. Then it started making sense.” What Luthria was struck by at the time was Vidya Balan’s positive attitude, her ability to deal with everything with ease. “Worry doesn’t exist for her,” says the filmmaker, “She just keeps laughing. She was hospitalised during the shoot as well, but we kept on.”

As it turned out, The Dirty Picture (2011) was one of the year’s biggest hits, and it fetched Vidya Balan a National Award as well.

“When I first took the script to her, she was shocked—and declined,” says Luthria, “But I knew she could do it. At the first look test, as soon as she appeared wearing hot pants, a knotted top and holding a cigarette, we knew we had got our Silk. I was electrified. People hadn’t been convinced of my choice; I’d fought to get Vidya. But look how that worked out!”

The film gave Vidya Balan the tag of a sex symbol, and one who had brought curves back into fashion, too, but it was her performance that won her rave reviews. She was soon being spoken of as the film industry’s ‘female Khan’—someone who could pack halls just by starring in a film.

Vidya Balan’s latest, Bobby Jasoos, has her playing Bilkis alias Bobby, a woman from a middle- class family in Hyderabad who nurses the ambition of becoming a famous detective. Again, she is the film’s hero. And again, it is a reminder of how steep her learning curve has been since her early days on television screens as the near-deaf frumpy sister of Hum Paanch (1995).

She got her first big break with Vidhu Vinod Chopra and Pradeep Sarkar’s Parineeta in 2005, a period film set in Bengal about a lady in love with her neighbour, a childhood friend; and while films like Kismet Konnection, Heyy Babyy and Salaam-e-Ishq did not do much for her career, she followed up the success of Dirty Picture with Kahaani, another movie that has come to define brand Vidya Balan as the woman who does what she likes, likes being who she is, and is successful at it.

It is a rainy afternoon in Mumbai, and Vidya Balan seems relaxed at her Juhu home that she shares with UTV head and husband Siddharth Roy Kapoor. Her hair is wet, and dressed in a cotton anarkali, she looks younger in person than she does onscreen. “I am a bit sleepy,” she confesses as she sips a cup of coffee, seated with her feet tucked under her on a sofa facing French windows that offer a clear view of Juhu Beach. “I have been reading this book, The Devotion of Suspect X [by Keigo Higashino], and last night I was falling asleep but telling myself, ‘No, I want to read.’ I was sleeping with the book on my chest and with the lights on.”

She seems pleased with the success of Bobby Jasoos, but says watching it in a movie hall, as she recently did, was a stressful experience. “I was thinking, ‘Are people laughing at the right places?’ You are constantly focusing on the audience—who’s leaving, who’s not. Totally unnecessary stress.”

She also remembers watching Dirty Picture at Gaiety, a single-screen theatre in Bandra, and describes that experience as unreal. “People were hooting, clapping, whistling,” she recounts, “I couldn’t hear any of the dialogues, and people were throwing money at the screen and dancing. And it was exactly like what was happening in the movie with Silk!”

In her latest release, she plays the affable neighbourhood girl who one can’t help but love. She could be playing herself, the only difference being Bobby is a detective who wants her strict father to be proud of her. “That’s what drew me to this movie. It’s the story of a female detective, but it’s about her family. It’s about life in that mohalla, within her family, and how relationships develop within that construct. And what a cast! They make the world so relatable.”

It is the third movie she has carried off as its sole star, and I ask if she gets up every morning and pats herself on the back for making this happen. She laughs loudly, and then ruminates a bit before answering. “It’s very… it’s very—I don’t really think about it actually. I just respond to scripts, and it has worked out beautifully. I do feel proud. Like after Dirty Picture, I was scared for Kahaani. I thought it would obliterate Kahaani, but people talk about Kahaani as well. Because people realised I could do Dirty Picture, so ‘Maybe Kahaani will be good’. I don’t know what people are going to say after Bobby; people are saying it’s my best. My father told me it’s his favourite. They’re saying, ‘It’s so layered’. I don’t know… I’m just happy with the work I’m doing.”

Asked why she thinks she is such a unique actress, doing what she does, she chuckles. “Maybe they don’t have as much greed—and therefore need— as me,” she declares. “An actress recently told me that ‘I almost signed ‘different’ movies but backed out… because I don’t think I can do it like you.’ And then I was like, I just want to do movies, I don’t think of ‘carrying’ a movie. I have been just around for so long, seen so much… experience works.”

Samar Shaikh, the director of Bobby Jasoos, his directorial debut, remembers his first meeting with Vidya Balan clearly. He visited her at her parents’ home in Bandra and sat in a small room that housed all her acting awards. “It was intimidating,” he says. But as soon as she stepped into the room, she put him at ease. ‘Bobby has entered the room,’ Shaikh recalls thinking. “She was asking me about my family, about the women in my family,” he says, “She wanted to know where I got the germ of Bobby. We used to ask questions like, ‘Did Bobby go to school?’, ‘Does she read Hindi newspapers or English?’ She made Bobby so much more than she was on paper. There were times we thought that Bobby is there in almost 90 per cent of the movie—will she get overbearing or irritating? But Vidya brings such subtlety, and she is the character. So it just never gets too much. She doesn’t try to be an actress. She is every woman.”

That’s partly because of how well Balan prepares for her roles. “I talk to the director extensively,” she says, “I have to trust him implicitly. I plan everything beforehand, so that on set, I am only reacting. I address all my issues with the script before I start shooting. I have said, ‘I don’t believe in this’, but we sort out those issues. Like Samar used to ask me, ‘What would Bobby do?’ And we would think about that. Finally, it’s a director’s medium.”

Apart from being a good actress, there is a common refrain about Vidya Balan that adds to her persona. She is just so relatable, she could be anybody. And also, as Bobby shows, not afraid to look—for lack of a better word—ugly. A scene in the movie has her playing an astrologer with dirty prosthetic teeth sticking out; in Dirty Picture, her character had an ample stomach on brave display. She has been outsized, awkward and pregnant without batting an eyelid. “I think 98 per cent roles represent women in a certain way. So they have to be a certain way. I know one movie can’t make or break you. I know you have to be near perfect. Everyone wonders if, for one movie, [one should] take the risk of being not-perfect. That’s why I said my greed is greater. I just feel like—if I’ve got this opportunity, why not do it? For me, beauty is what beauty does. If that astrologer works, then it works.”

She is aware of how she snapped Indian filmgoers out of the super-slim ideal of sexiness that globalisation had brought in its wake. “I think beauty is all about what you think of yourself. I was a fat child, and at 19, went through this crash diet. I only used to drink water, and became skinny. But when I started eating normally, the weight all came back. I spent most of my life hating my body. But seven years ago, I realised I couldn’t keep everyone happy, and I was falling sick, and I was unhappy. Then I said to myself, ‘I am imperfect’ and let’s just be me.”

Does she now use her curviness to her advantage? She smiles. “So what? I am not using it. I don’t care anymore what people say about how I look or what I am wearing. I met this 16-year- old the other day who was getting her chin done—a jaw enhancement! I was shocked: why would someone do that? And her parents are paying for it! I am so glad I have reached a place where I just don’t care.”

She’s as non-diva as it gets, and it could be what translates on screen. As Sahil Sangha, producer of Bobby Jasoos, says, “I first met her on the sets of Salaam-e-Ishq, and all of us assistant directors had a crush on her. She is just so affable and charming. As producer, I knew it would work because she has this unique combination of viability and talent.”

As our interview at her Juhu home winds down, we talk about movies she has liked of late. “I loved Her.” And what she does on her days off. “I laze, drink chai, do yoga and babysit my sister’s children. Those are the best days ever.” She is also a big fan of American TV shows, and has been waiting for the latest season of Mad Men on DVD.

On DVD? “I don’t believe in piracy. But everybody keeps giving me downloaded TV shows!”

Even though she is not sure of what she wants to do next, except push the envelope, she seems content with her career. “She has always been a real person,” says Pradeep Sarkar, who has seen her from her adfilm days, “That’s a given. But she is also a God-believing person, and has got tremendous faith. In dark times, she has told me to hold on. Her faith in herself and God is unwavering and very strong. That’s what gives you strength, you know. That’s how she has held on in this vicious industry. It’s her faith.” Amen.