The Flip Side of Everything

Sudarshan Shetty’s new solo show in Bangalore is an exposition of his lifelong preoccupation with dualities, divergences and contradictions 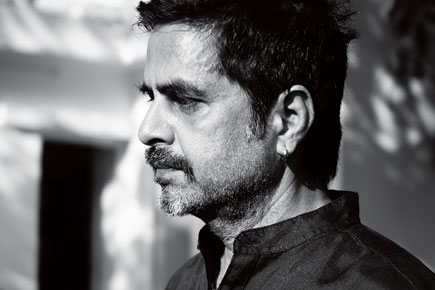 It seems rather tedious to begin a story by talking of the weather. But it is important—for our moods, for the many negotiations that depend on the weather’s eccentricities. The weather in Bengaluru is disgustingly hot this afternoon. So the insides of Galleryske, housed in a 100-something-year- old colonial style bungalow feels delightfully refreshing to be in. The contrast of the outside and the inside, this and that, and other dualities are sentiments I will continue to encounter for the rest of the afternoon walking through Sudarshan Shetty’s latest solo show: ‘who must write these lines’.

The duality in things and ideas, juxtapositions, stark contrasts that— despite their most recognised individual character—seem to marry each other perfectly are descriptions that would fit Shetty’s practice in its entirety. But descriptions are nearly always restrictive, the temptation to conveniently box a practice into a frame unjust, lazy. In that vein, his latest set of works are a marked departure from earlier pieces that had what he once termed a ‘fairground spectacle’ quality to them. “In 1995, when I did my first major show ‘Paper Moon’, I was very conscious about creating a ‘fairground spectacle’. But now the idea of the spectacle is more symbolic or conceptual in nature,” Shetty tells me over the phone from Goa, where he has driven “for work, not holiday” from Mumbai, where the 54-year-old lives.

Antithesis crops up a lot in our conversation. He points out that a lot of the works from 1995 and a few years thereafter were large installations. “There is a reference to the monumental,” he says, “Some are held together by ropes, precariously balanced and in a state of impending collapse. Where mechanics were used, you could see the machines. They were made with my limited understanding of the mechanics, so they could stop working anytime.”

There is an object and its seeming meaninglessness of function that Shetty evokes in his exploration of the human- object relationship. In ‘who must write these lines’, an old broken ceramic jar— the sort grandmothers made and stored mango pickle in—is made whole with brass, something fragile held together with something longer lasting. It is perched on a tall shelf, reminiscent of traditional kitchens. There lies a carpet, intricately patterned, creased as if someone stepped on it in a hurry and didn’t straighten it. It folds up against the wall and you are tempted to pull it down and lay it out right. But for all its sense of movement and a moment caught in time, the carpet is made of reclaimed wood, stitched together painstakingly, taking two craftsmen a month to finish. Wood for this, and older works comes from demolished homes in Mumbai. “A door, a beam becomes something else. Does it symbolise the inclusion of stories [of people in those homes] that we don’t know about? In the carpet work, what does representation mean? There is an artifice involved in the setting up of a show. Can we make this artifice evident in the work?” Shetty wonders.

There is again the notion of duality, the traditional paired with artifice, the ephemeral with permanence. Shetty says that the juxtapositions in his works come from his interest in poetry from the 12th to 15th century plurality, notably Kabir’s dohas. “In the first line, usually an idea is presented, and in the next line, there is a counter idea. This gives rise to a speculative space, a duality or multiplicity of interpretation that I am interested in,” he says. The son of a Yakshagana artist who moved his family to Mumbai when Shetty was but a toddler, he had poetry, music and dance all around him while growing up.

What is home? The very idea of ‘home’ is a “subjective question,” he says. I have asked him what home means to him, in a reference to his 2008 work House of Shades, commissioned by Louis Vuitton. The work places dozens of sunglasses around a steel chamber where the politics of viewing reverse when visitors enter—the eyeglasses turn to view the visitor, “placing them under the dispassionate surveillance of invisible viewers”, in Shetty’s words. “Emotions are stirred and the idea of home as a place of safety and refuge, and the idea of a private sphere, is ruthlessly ruptured.” The installation breaks away from the romanticised idea of home as a place for rose-tinted nostalgia. “In my show ‘Love’ (2006), the works were not from my own experience of love. I looked at a marketable idea of love. Why does a Valentine’s Day heart look like that— have that shape and that colour?” The video installation in that show loops the image of a biological heart becoming an artificial Jarvik heart becoming an image of a loved up pink V-day heart. “I suppose you can’t avoid subjectivity,” he says, circling back to my question to say that ‘Leaving Home’ (a solo in 2008) was “an oblique reference to the notion of home.”

‘Leaving Home’ and several older shows before and after it feature skeletons cast in steel, knives, scissors and the colour of dripping blood. Though perhaps subtler over the years, Shetty’s works have a sense of the morbid, the macabre. If there were skeletons distorted in various angles earlier, in the new solo, the ritualistic crops up. A set of three untitled photographs show Shetty facing the Gateway of India and dropping a clay pot over his left shoulder, with echoes of a Hindu funeral. The smashed clay pot, what was salvageable of it, is stuck back together and housed in a vitrine, museumifying something quotidian, something that comes with the baggage of culture and old traditions, yet impermanent by itself in its fragility.

Shetty himself doesn’t see a sense of the morbid, however slight, in his works. He says that it perhaps has its origins in a personal experience when, while working for his 2003 solo ‘Consanguinity’, he was also attending to his father who was dying of cancer. Mortality is a recurring thread in most of his works from then on.

I ask him about his preoccupation, even fascination, with mortality. “All our negotiations with the world could be read as a reflection of our own sense of mortality. There is an analogy I often repeat. When you buy a bar of soap, you buy into a promise of youth, and you are willing and a knowing victim of this deception. In the market place, more often than not, there is a gap between a promise and the function an object comes to deliver. As an object maker, I make an object and when displayed in a gallery, the function of the object becomes different. Making an object well takes a reasonable period of time, [and] once having been made, a distance can be drawn where the object can seem meaningless. The question is whether one can include the sense of its meaninglessness into the work,” he says. His interest lies in exploring this gap between the promise attached to an object and its actual function.

Shetty’s text works, from 2010 and thereafter, are often ramblings— long breathless sentences that are monologue-ish in nature. I find in them a sense of premonition, loneliness even, that is inherent to his city, to every city, to modern existence in fact. I ask him about it and he remarks that he doesn’t know, really. “Maybe there is that sense of existential emptiness,” he says, referring especially to a work from 2011 that talks of a lone woman in a small flat “in a building that housed 64 flats in a city of 17 million”.

From large room-filling installations to kinetic sculptures to text to photography to artifices to reclaimed objects, Shetty’s oeuvre has been marked by a sharp absence of a signature style. He says that he works very hard not to repeat himself. “It comes from my need for multiplicity. Even if I am talking about the same thing, I am constantly looking for as many ways as possible to say it,” he says. He remembers his teachers telling him to develop his own style, but he was very conscious to veer away from it. “A signature style points towards ‘authorship’ and I try to avoid that. I believe that my works are not wholly mine, there are so many other factors involved, I see myself looking back at tradition and history and constantly drawing from it,” he says.

That preoccupation with multiplicity is also evident in the work Path to Water, where five translations of an Amir Khusrao line, ‘Bahut kathin hai dagar panghat ki’ (The road to the well is much too difficult) are inlaid in plastic on teak wood panels. Being shown for the first time in India, the other side of the panels feature carved wood reliefs of an idealised Indian landscape. The other part of the installation heaps store-bought terracotta objects on a long low plinth, resembling those found in archaeological excavations. Devoid of labels and details of provenance, the display gains an aura of antiquity. Set alongside the reliefs, they question ideas of the labour involved, and values, perceived and real.

Shetty is among India’s best known contemporary artists. His works are in collections of museums both private and public. “Sudarshan’s practice is one that has an incredible depth of eastern historical and philosophical underpinning and it is very exciting that the artist chooses to express this successfully through a variety of mediums. This itself makes the practice unique in its position,” says Sunitha Kumar Emmart of Galleryske. Along the way, he has turned collector too, though “not the sort who will go looking to collect. Friends have gifted me works,” he says. The busy artist is currently working for a solo show in Brussels this May. “I am also building a set of buildings for a longer video that I am working on. They may seem monumental, but they can be erected inside a room.”

Asked what his interests are beyond art, Shetty says he reads a lot of poetry. The last few years have seen him read a lot of translated works. He’s venturing into new English poetry these days, he says, and when I say I read poetry, asks if I can suggest some names. I do. We have, through the conversation, talked about shared half-hometowns, familiar languages and poetry. But as storytellers of yore would say, those are stories for another day.

(‘Who must write these lines’ is on till 30 April at Galleryske, Bengaluru)