The Fate of Ranbir Kapoor

A star with disarming manners, a football nut who hopes Argentina lifts the World Cup, a young man who is terrified of commitment, Ranbir Kapoor is on a sudden dramatic flight to the very top. And it is written on his face that he is the next Number One. 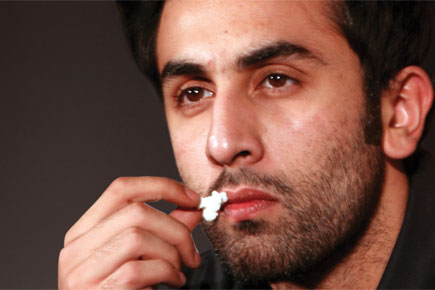 This man is on a sudden dramatic flight to the very top. And it is written on his face that he is the next Number One.


Fake Ranbir Kapoor wants to get under the skin of Kishore Kumar for his new movie. He’d like to research the role with Asha Bhosle. On Twitter, he asks the legendary singer if he can drop by her home, adding, “Aapke haathon ka khaana khaane ke liye betaab hoon. (I long to eat your home-cooked food)” The artiste then graciously invites Fake Ranbir over, promising to ‘cook up a storm’.

A look of genuine dismay flickers across the face of the real Ranbir Kapoor when he hears about this Twitter exchange. Yes, he is committed to a biopic on the colourful playback singer to be directed by Anurag Basu, but shooting begins only late 2011. Meanwhile, he has never met ‘Ashaji’ in person, and pleads, “Can someone please, what’s the word —tweet—and tell her that it’s an imposter?” Fake Ranbir Kapoor often spams the actor’s granduncle Shammi Kapoor with requests. He gets no love there because “Shammi Dadaji knows I’m not on Twitter.”

Ranbir Kapoor is introverted, polite, smiles easily. We are in a snug room in his bungalow that overlooks a manicured garden. The room is done up in rich upholstery and an entire, rough, whitewashed wall is covered with beautiful crosses. You’d think you had wandered into a shrine if it were not for two huge, stout bottles of fine Scotch in a corner bar. On the floor rests a big silver vessel with a tap attached, carrying the unique RK studio emblem. This room has not changed in nearly 25 years, he says, but the bungalow will be torn down next month to make way for a bigger mansion.

The fourth generation Kapoor is grappling with his own fame. Even his imposters on Twitter and Facebook have hundreds of followers. Fans wait outside the wooden gate of his Pali Hill bungalow, KrishnaRaj (named after his grandparents), till he comes out to sign autographs. Young girls try to pull his shirt and older ‘aunties’ in Hong Kong pay lakhs for a charity dinner with the young stud.

His latest release Raajneeti has become a pan-India hit. “It’s second only to 3 Idiots in its opening week,” says a Bollywood trade source, “Raajneeti is now the biggest hit of 2010.” Ironically, Rajkumar Hirani had approached Ranbir to play the character of Rancho in 3 Idiots, but the director realised the star was too young to play the older Phunsuk Wangdu. In Raajneeti, Ranbir’s character is a strange stew of the Pandava Arjun, political scion Rahul Gandhi and mafia heir Michael Corleone. “I didn’t follow Al Pacino’s performance, though I knew that Raajneeti had touches of The Godfather. Pacino is one of the finest talents and I didn’t want to mimic him,” says Ranbir, an ex-student of the Lee Strasberg Theatre and Film Institute in New York, an acting school founded by Strasberg, Pacino’s acting coach.

There were flashes of his family in his ill-fated debut Saawariya; snatches of Raj, Shammi and Rishi. Yet Hindi movie lovers have embraced Ranbir for his own consummate talent. In 2009, he grew into his new acting shoes with Wake Up Sid and Rocket Singh: Salesman Of The Year. Last November, the comedy Ajab Prem Ki Ghazab Kahani gave Ranbir his first superhit, while Raajneeti has cemented his success, despite its ensemble cast.

The star is shooting towards the top slot. Shah Rukh Khan and Aamir Khan are doing fewer films and busy being the financial or creative proprietors of their films. Akshay Kumar was a contender but slipped after a string of five flops starting with Chandni Chowk To China, while Salman Khan’s hits like Wanted are offset by duds like London Dreams and Veer. Hrithik Roshan was dubbed the Crown Prince all these years, but movie-goers were cold to Kites and the trade predicts that his next projects (Guzaarish, Zindagi Na Milegi Dobara) will cater to niche audiences.

Later this year, Ranbir has love story Anjaana Anjaani, directed by his Bachna Ae Haseeno director Siddharth Anand. He soon begins shooting for Imtiaz Ali’s film Rockstar, then will move to Anurag Basu’s romantic murder mystery Silence. He has been approached by Mani Ratnam for his next movie tentatively titled Azaan, and there’s the Kishore Kumar biopic. “I commit to two films in a year and discuss one more in advance. I don’t commit to more because sometimes, by the time you reach that project, you’re bored. I don’t have a plan. I go with my gut,” he says.

Last April, when we met after he’d wrapped up shooting for Wake Up Sid, Ranbir spoke excitedly of reading all kinds of scripts. Things have changed since, he is busier now. “I can’t meet as many people, but I still take the final call on my scripts. The only people who help me are my mother (Neetu Kapoor) and Ayaan Mukherji (director of Wake Up Sid).” Father Rishi Kapoor is the only person who intimidates Ranbir. “My dad can see through me and catch false notes. I call my sister (Riddhima) and my mom groupies; they cheer everything I do. My father doesn’t cushion anything. He’s completely honest.”

So is Ranbir. From losing his virginity at 15, doing marijuana while studying in New York, or commenting on the highs and lows of his parents’ marriage, he’s always been forthright in interviews. Ranbir does them rarely because he feels an actor must preserve his mystery, especially if you’re here for the long haul (he talks of acting/directing for the next 40 years). Twitter is dangerous for an actor, he says, because you only interact with your fans and develop a ‘God complex’. He says he’s not vain since he knows he has “a very ugly face, long torso and bad hair. What works for me is that I love acting, and I emotionally live out my characters”.

“Rocket Singh will always be one of my favourite performances, but I’m a pretty detached person,” he says. Even his mother Neetu has commented on how she has never seen Ranbir angry. An action director who has worked with Ranbir since he was an assistant director on Black, says he has no airs. “I saw him drinking chai the other day on the road at Andheri with Imtiaz Ali. A crowd gathered and he had to leave, but he was cool,” says the source.

Ranbir may be grounded, but the offers and his remuneration are shooting up. It is dad Rishi who manages his salary. “The most boring part of my week is the one hour I spend with my accountant,” he says, grinning.

Ranbir is a mixture of old film family tradition and Generation Next. His manners are impeccable and he makes it a point to escort you to the gate (like his father Rishi) after interviews.

He was only six when his grandfather Raj Kapoor passed away, so what he remembers of his childhood is not the overwhelming presence of a cinematic giant, but a life filled with film screenings, music sittings and “passionate people fighting over a stupid costume or a dialogue”.

The actor says his days at HR College in Mumbai are a hazy blur of accounts and commerce, which went way over his head. Meanwhile, he made “nearly 300” short films with his friends, assisted his dad and uncle Rajiv Kapoor on their film shoots, spent a season studying acting in New York, and assisted Sanjay Leela Bhansali on Black. “I learnt more from Bhansali sir than I would have in any film or acting school,” he says.

The star is unapologetically obsessed with cinema, but he has other interests too. He is rooting for Argentina in the Fifa World Cup and spends good money visiting football venues all over the world. He loves riding his electric scooter Segway in the dead of the night in Bandra’s bylanes. A keen basketball player as well, Ranbir’s face brightens up as he talks about how he was recently invited by the National Basketball Association (NBA) to the centre court for a Knicks vs Lakers game. “I met Kobe Bryant, who signed a pair of shoes for me. It was nice of him to do that for a random fan from India.”

Ranbir’s playboy reputation has only added to his star status. Rumours have linked him to both Katrina Kaif and Priyanka Chopra. He broke up with girlfriend Deepika Padukone last year and is happy being single. “I feel I spoke too much about it in the press,” he says. “Of course we’ll work together again. There’s a slight friction because we were in an intense relationship. But what should remain now is a calmness and sense of camaraderie.”

Like his films, Ranbir says he has sorted out his love life too. “I’ve never experienced heartbreak. Maybe it’s because I don’t surrender enough of myself in a relationship,” he says. The actor believes he will get married when he finds the right person, but says “commitment is scary because it’s hard work and you need to invest a lot of time in a marriage”. Meanwhile, his career remains at the top of his mind, and the actor is doing prep for Rockstar while enduring an “unwanted break” from work. “Yes, I’m getting some good alone time. But if I’m not on a film set, I feel a bit meaningless,” he says.