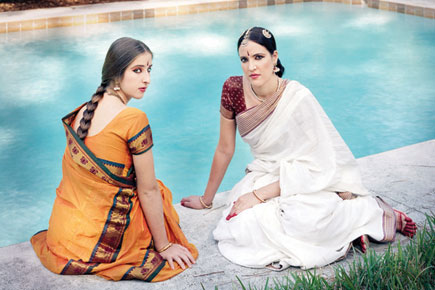 
For John Berger, British art critic and author, photography is in some ways always concerned with recollection. ‘The camera relieves us of the burden of memory. It surveys us like God, and it surveys for us,’ he wrote in Ways of Looking, published in 1980. A decade later, he shifts his position, saying, ‘All photographs are there to remind us of what we forget…’ In Exchanging Glances, an exhibition featuring the photographic works of Fabien Charuau, Michael Bühler-Rose and Pradeep Dalal, we see how memory functions at multiple levels—both collective and individual.

For New York-based Michael Bühler-Rose, the focus is on the weight of India’s colonial past with an unusual twist. In his series, Little Indian Still-Lifes, he seeks inspiration from Dutch still-life paintings, resplendent in their show of luxury goods and exotic foodstuff. These works functioned both as ‘advertisements’, a way in which the patron showed off his worldly wealth, as well as a documentation of 16th century trade routes and New World discoveries. Bühler-Rose flips this around, and gathers instead things from ‘Little India’ markets across the world, and then photographs them styled in a similar manner to beautifully-lit and composed Dutch still-life paintings. In one photo, a bunch of ripe lychees hangs over a postcard image of Aishwarya Rai; in another, a cluster of golden jamuns is suspended above a picture of Shah Rukh Khan. It is, as Bühler-Rose explains, an intentional reversal of power, of “India settling the West”.

His penchant for composition and portraiture is also evident in the series Constructing the Exotic, which explores the female figure in traditional Indian painting and colonial-era photography. His models are ‘Western’ women who were raised within the Indian subcontinent or were born within its socio-religious heritage, thereby questioning notions of the ‘exotic other’. These images are pre-Raphaelite in style, with their rich jewel colours, formal yet fluid poses, and attention to detail. The women, ethereally beautiful and draped in saris, stare at the viewer or at each other, aware of the camera that surveys them with a distinctly male gaze.

This is stretched to an extreme in the work of Fabien Charuau. His series, Send Some Candids, comprises images surreptitiously taken of women by men on their mobile phones. As Charuau says, “Everywhere you look, you find phone cameras held at eye-level as though they are some inscrutable salute…” He was intrigued by where these images ended up, and, unsurprisingly, found they have an online residue, particularly on Indian porn sites. Apparently, there are “entire fora dedicated to this highly voyeuristic pastime”. The images in the show, with most of the faces censored, conjure questions of how men ‘look’ at women, of the clearly skewed nature of gender power structures, where men are the hunters and women must constantly be on their guard.

Candid moments also feature in Pradeep Dalal’s work, yet he, more in accordance with Berger’s theories, focuses on photography as a window to the past. The series Malabar Hill is a joyful, nostalgic tribute to his youth, comprising images of him and his friends taken 25 years ago in a Mumbai neighbourhood of the same name. The photographs are enclosed in LP album covers, highlighting the importance that music had in their lives—it is a poignant look at how people bond over music, how tunes can carry memories, and how youth is inextricably bound and defined by the musical sounds of an era. In the Lothal Portrait series, however, Dalal creates a careful blend of the present and past. At Lothal, a prominent city of the Indus Valley Civilisation, he took pictures of tourists and locals alike and combined these with older photos from the same location. The place, which functions as a powerful reservoir of Indian history, transforms into a space where collective and individual memories blend. This is strikingly captured in the way he layers the images—sepia, colour and black-and-white—one over the other.

Exchanging Glances truly opens up to viewers in a way few art exhibitions do. We see what Berger means when he says, “Because each one of us forgets different things, a photo… may change its meaning according to who is looking at it.” There is much here to provoke, invigorate and inspire.