The Candid Killer of Camera Shyness

Kolkata filmmaker Q’s movies are unlike anything seen in India. His latest, Gandu, is shot in digital SLR and features explicit sex scenes with risque rap lyrics 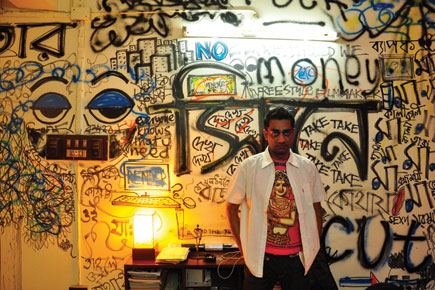 Kolkata filmmaker Q’s movies are unlike anything seen in India. His latest, Gandu, is shot in digital SLR and features explicit sex scenes with risque rap lyrics


Shot in stark black-and-white with a single-colour sex scene at the end, Gandu is extreme cinema. Besides the sex and expletives, the storyline is non-existent, which is what happens when a movie is shot without a script. “Look,” says Q, its maker, “the film is supposed to generate a physical response. It questions the mindset and sensibilities of its viewers. I was expecting people to react. Those who walked out went straight home and puked, for all I know.”

Q is at his studio at Golf Green in Kolkata, relaxing in a sleeveless vest and pair of outrageous shades. The studio doubles as his office. There is a graffiti wall with ‘fuck’ scrawled all over. A huge Uma Thurman dangles a cigarette and stares down from a Pulp Fiction poster on the wall opposite.

Q does or did have a name: Kaushik Mukherjee. He made the rounds of the adworld for 12 years before getting into films. For the cinema he makes, you can blame a film library called Mohan’s Video Vision in Sri Lanka at least partly. “While I was in Sri Lanka as an executive creative director with Ogilvy,” he recounts, “I discovered Mohan’s Video Vision in a Tamil area. It was there that I discovered films like Seven Samurai and Run Lola Run. It changed my perspective on cinema.”

After making over 100 commercials, Q returned to Kolkata to make Bengali feature films. He set up a production house called Overdosejoint, and began with documentary and then experimental films. His features include Tepantorer Maathe, Bishh and Gandu. Only Bishh has had a commercial release in India. A post-modern fairy tale, Tepantorer Maathe is about an ex-junkie prince doing his own thing. It has Flash Gordon, Saturn, celestial birds, rain, a spoilt princess with a passion for blackheads, a bisexual Goth rock witch and a cricket playing delinquent. Bishh had a theatre run in 2009 with “very few cuts and a changed title as suggested by the censor board”. The film follows three women as they survive the night fighting for their identities. Their stories run in parallel, moving through grief, despair and confusion to breakdowns, introspection and violence.

But it is Gandu that has made him famous (or infamous). The film’s song lyrics are central to its theme, with the protagonist dreaming of being a rap artiste. The translation of the main song, by Harihar, goes something like this: ‘In bathrooms, verandas, after lunch hours, you will find naked bodies sitting, lying inside rooms, hugging pillows in hot beds in the morning, grabbing their cocks and jerking off to their hearts’ content. There are a lot of fuckers out there, who don’t have a pussy, they are spending their lives in utter misery.’

Besides Mohan of Mohan’s Video Vision, the other man you would hold responsible for Q’s cinema is Suman Chattopadhyay, a Bengali singer, songwriter and performer now known as Kabir Suman (after his conversion to Islam). In the 1990s, he had kicked off Calcutta’s Bangla rock music scene. Q was a Suman groupie then, but abandoned the idea of becoming a rockstar and got into cinema instead. “I would hang around, painting T-shirts and posters for Sumanda’s concerts. I was a Suman impersonator. I learnt to play the guitar. Rupam (lead singer of Fossils, a Bangla rockband) was my classmate at college. We would have been rockstars at 22, but Calcutta didn’t respond,” he says. “It took 10 years for the rock movement to happen in Calcutta, and we were way too young. Bodo na hole banda ekhane kichhu hoye na (If you ain’t an adult, nothing happens). Besides, I fled. I didn’t hang around and fight it out like Cactus and others did.”

Why rap in Gandu?

“Why not?” says Q. “Can you imagine these lyrics in any other form of melody?”

The logic is irrefutable. What about the lyrics?

The visuals of the movie were shot with a Canon EOS 7 DSLR camera, but it was not to keep costs low. “Making a black-and-white film is bloody expensive. It would take around a crore to shoot Gandu in 60 mm black and white stock,” says Q. Shooting with digital SLR is cheaper, but most cameras don’t allow you to use monochrome; this one did. “And see the results,” says Q, “It’s a protest film, it has to be in black-and-white, and look how brilliant it looks.”

The only colour scene is a psychedelic one of lovemaking. He used a Canon 7D, a camera that gave him mobility, letting him take shots from otherwise impossible angles. If he had been using a video camera, it wouldn’t have given him the depth of field that a movie camera does. The DSLR gave him the desired angles plus depth of field.

His cast and crew were professionals, but they were also friends with shared sensibilities on cinema and music. “While shooting a sex scene, I would shoo away all others from the room. So there were the actors and me with my equipment,” says Q. The sex scenes weren’t easy. An asymmetry was to blame. “You know, it’s easier for women to do these scenes, for they can have multiple orgasms, but for men to perform and that too in front of the camera, is tough.”

Anubrata, a young amateur who was roped in to play the lead role, had “to be coaxed to have an erection”, says Q, laughing. “In fact, Joyraj [another actor] ended up narrating to Anubrata how Marlon Brando took three hours to get an erection while shooting Last Tango in Paris. He quoted Brando saying, ‘There I was waiting for an erection with the whole crew prepared with the shot, and my penis was like peanuts!’. The whole crew back here was in splits.”

Apart from Joyraj, there was Kamalika, a regular in Bengali soaps, playing Gandu’s mother, and Rii, Q’s real-life girlfriend, doing a triple role. Rituparna, aka Rii, says, “I was comfortable because both of us had watched a lot of independent European cinema together where nudity and sex scenes are pretty common. Q exposed me to a lot of avant garde cinema that made me choose the kind of films I wanted to do.”

An earlier documentary made by Q, Love in India, had even used personal footage of her and Q’s lovemaking. Was she comfortable with that? “I didn’t have any problems at all. I have been a professional actress for 10 years now. It doesn’t bother me if the camera is off or on.” But still, any explicit shot requires preparation. Speaking of the workshops they did to prepare themselves for the sex scenes in Gandu, Rii says: “They were physical workshops that helped us shed our inhibitions and become real. If someone were to touch my boobs, it’s natural that I’d be aroused. But it is the aftermath that is important. How do you feel after such a shoot? I wasn’t shattered or anything after I shot Gandu. I was shooting lovemaking scenes with my co-actor that were being shot by my boyfriend. Now, how weird is that?”

Q is still to work out how much Gandu cost exactly, but believes there’s a way for such films to do good business in India. “There is a mindset in India that an art film is a lost proposition. But that shouldn’t be so. If I like independent European films, then there must be others who like them too. Then it is a question of finding the others who have the sensibility to watch my films. It is a question of finding the right audience.”

Bishh, which Q had financed independently, was shot in 10 days on a budget of Rs 10 lakh. That one too had a lot of sex scenes and cuss words. The film, he says, was watched by rickshawpullers in the front row with professors sitting in the balcony and students filling the rest of the theatre. “Bishh made me realise that all that demographic psychology was bullshit. You cannot predict people’s responses.”

Others in Kolkata’s film fraternity like Suman Mukherjee, who made Chaturanga and Mahanagar@Kolkata, laud Q’s effort. He says, “I cannot comment on the aesthetics of Gandu. All I can say, about the filmmaking procedure, is that it is a smartly made film and his use of words and visuals is completely fresh and novel [for Indian audiences]. He is getting space in places like Berlin, Slamdance, and that’s pretty good.”

Encouraged, Q has more in store. Gandu, in fact, is just the first of a series called Bangla Black. The rest of the films will be like the first one—cheap and dirty fairy tales. Doing what no Indian has done before on screen.