From mill workers to chawl dwellers and old settlements to fancy towers, Sudhir Patwardhan’s art has kept up with the changing landscape of the city 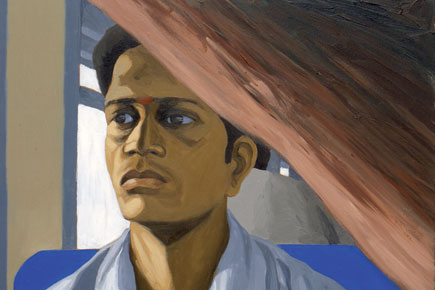 From mill workers to chawl dwellers and old settlements to fancy towers, Sudhir Patwardhan’s art has kept up with the changing landscape of the city


Bombay has long been a muse to many artists and writers. Reams have been written about it, and innumerable photographs and paintings have celebrated the city’s quintessential ‘never-say-die’ spirit. But nobody has covered Bombay like Sudhir Patwardhan. Even in his new suite of paintings—which are not about Bombay, but about his engagement with people and relationships— his love for Bombay shines through. Among the exhibits is The Emergent, which shows a glass-fronted commercial tower shooting up right in the middle of a shantytown. In another painting, a BEST bus returns as a motif, albeit only in the background. Most crucially, Sainik shows a young, nervous Shiv Sena worker, probably on the first day of his new job.

For the artist, who until 2005 had a day job as a radiologist, Bombay seems to be an irresistibly challenging case study. But for some years now, especially after he became a grandfather, the city has figured less and less in his works. His themes gradually shifted to family life, relationships and legacy. There were also other reasons for keeping away from Bombay.

For one, he was disenchanted with how the new city was emerging, a city overrun by land sharks, corrupt builders and shifty politicians. Luxurious towers were displacing old settlements. Local trains, a lifeline for millions of Mumbaikars just as it was for Patwardhan, were overcrowded. With inflation, the chasm between the poor and the rich had grown. Patwardhan, a Maharashtrian with Leftist leanings, was disturbed by this change.

This was not the city he had come to as a 24-year-old brimming with hope. “On the one hand, one fears that there is going to be an infrastructure crisis in Bombay—there already is—and on the other, one hears things like ‘Bombay now no longer is even in the financial position it once was to handle a collapse of this scale’. Bombay lovers say that it is going the Kolkata way, it is a dying city,” he says.

Does that mean Bombay as a subject no longer inspires him? “More than ever, in fact, I feel the need to return to the streets and find ways to paint Bombay as it is evolving now,” he says. “For an artist, there is always a period when you are struck by the changes that have taken place while you were away and you resent those changes. We must understand that people pay a price for change to happen. Some pay the price unfairly, some only benefit. It is the job of an artist to give voice to these injustices,” he says.

Since the beginning of his artistic career, Patwardhan’s sympathies have rested with the working class. “At one point, I was called the ‘spokesperson of the working class’,” he smiles. In the past, he painted Bombay’s mill workers with Van Goghesque sincerity and compassion. Local trains and buses and middle-class commuters found vivid expression in his work. So did Irani cafes and chawls, two of Mumbai’s most enduring symbols.

Chawl life, in particular, has fascinated Patwardhan since his childhood. “When we were staying in Tardeo and then in Girgaon, we were surrounded by chawls. We had relatives who stayed in chawls. Also, if you take the Central Railway local, like I used to at one point, while crossing Chinchpokli and Currey Road, you will find yourself looking into chawls, into people’s homes and their interior lives.”

In many of his paintings, Patwardhan has contrasted chawl life with modernity. Part of his concern has also been to bridge the gap between the old city and the new. “Right through my childhood, this idea of moving into a flat from a close-knit neighbourhood filled me with dread. One feared that the move to a flat would break old ties, and the sense of community would be lost. Flat life, as we all know, is like living in a cocoon—doors remain shut and there is limited interaction among neighbours, unlike in a chawl, where people are an intrinsic part of each other’s lives.”

Bombay had worked its magic on him as early as 1973. That was the year when he had moved from Pune to Tardeo, a bustling middle-class citadel in South Mumbai. Overwhelmed by its “sheer size and maddening crowd”, Patwardhan’s first impression was: ‘How can so many people live here?’

“In Pune, a smaller town, we were used to seeing greenery around us. Less crowded, it was a quiet life. You could travel the whole city in half an hour on a bike. But Bombay was different. I thought no matter how many years you spend in Bombay and however frequently you travel within it, you will never know or see the entire city.”

Patwardhan’s arrival in Bombay coincided with his growing interest in art. Though not formally trained, he picked up the tricks fast. Wherever he went, he carried a sketchbook. Bombay was slowly emerging on his pages. From its industrial character to its everyday life, from its flourishing cotton mills to its plush malls and from its pulsating crowd to the 1992-93 riots, Patwardhan remained singularly committed to the cause of depicting the city in all its glory and grime. From large paintings like Lower Parel to medium-sized ones of Byculla and sketches of CST station, Patwardhan has painted it all.

When he shifted to Thane in 1978, the emerging satellite town became his key focus. “It seemed interesting to me that Thane was a point where the main Bombay ended and a new city began, and this new city was also incidentally where nature began,” he says. From this period, paintings like Ulhasnagar, Pokhran and Kanjur are considered his most significant works.

At first glance, they may look neatly photorealistic but like with most of his works, there is an undercurrent of tension and complexity, there are layers. Where earlier he used to sketch from life, now he prefers sketching from a photograph. He now also paints slowly, taking anything between a month and six months to complete a canvas. “With the digital camera easily available in the market, I started using it for my studies. So yes, the works are about photorealism at one level, but there is so much more. The idea is not to create a photo-like reproduction, but to create a painting.”

And people are still his most recurring leitmotif. A sense of place is as significant as the people who occupy it, Patwardhan had written way back in 1985. “When I started on the road to becoming an artist, there was no doubt in my mind as to what art was about. It was about people,” he says.

Patwardhan calls himself not only an observer but also a participant in society. A book on him is aptly titled The Complicit Observer. “Essentially, we all participate in society, but we are reduced to being observers because there is very little we can do.” This is where the various facets of an artist come into play.

“You cannot say that an artist has only one role or function in society. Art has many aims, and hence, many uses. For centuries, art has played different roles in different historical periods. For instance, Renaissance painters recorded their day and time. Today, modern man is aware of the Renaissance era through the paintings of that time. Similarly, earlier, I painted the working class to give them a self-image, to immortalise them in history. That was my aim.”

He feels different people can take different things from art. “If any artist working in any field is doing his work with honesty, then that will always be of use to society. Then it is up to society to derive what it can from it. If you ask me about my Bombay images, have I done enough? Honestly, you will find enough books, articles and historical documents which will tell you more about the city than my paintings,” he says, adding, “But then, paintings are also about something else, some other perceptions, not easily put into words.”

“My images give viewers some sense of how Bombay was—and what it has become. If I have managed to map its historical changes and in the process given people their voice, I think I would have succeeded in performing one of my roles as an artist,” says Patwardhan.

Route Maps will show at The Guild Art Gallery, Mumbai till 11 December