Just three films old, Alia Bhatt is the new rage in Bollywood. Is she more than the daddy’s daughter? 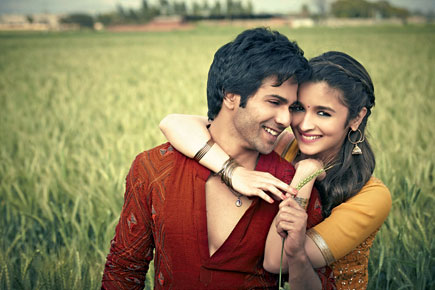 Just three films old, Alia Bhatt is the new rage in Bollywood. Is she more than the daddy’s daughter?

Two days before her first film Student of the Year went on the floors, Alia Bhatt had a minor panic attack. She pulled on a pair of jeans, stepped into her car, and drove to her father’s office in Khar, Mumbai. Mahesh Bhatt recalls Alia’s exact words that afternoon. “What if you found out you do not have the talent to get what you have always wanted the most?” she had asked. Bhatt did not have a success formula for his 18-year-old daughter that day. All he said to her was that the first sign of a good actor is butterflies in one’s belly. “She stood in a roomful of people and spoke her fears out that day,” says the father, “It takes courage to do that.”

Today, two years, three films and countless belly-butterfly moments later, Alia is on her way to joining the league of actors who’ve had to handle the perks and perils of success very early in life. At 21, she is already being hailed as tomorrow’s superstar. She has age on her side, an acting graph that’s gaining a shape of its own, and above all, an effervescence that’s quite unique to her.

Alia, the current darling of fashionistas, displays no fear of competition. Few others can fill her spot, she seems to sense, and this is her biggest strength. Comparisons with Kareena Kapoor are more than welcome, but she’s too comfortable in her skin to emulate anyone. She likes to speak her mind, and if she sounds naïve at times, she doesn’t try to hide it.

“I don’t feel too different from any other girl my age. Maybe I’ve discovered what I really want to do a lot earlier than many others, that’s all,” says Alia, taking a bite of her grilled chicken and brown rice. It’s Day 22 of the promotional exercise of her latest film, Humpty Sharma Ki Dulhaniya, and she has probably had a lot of interview lunches. “I’ve travelled to 12 cities in the past 10 days. It’s exhausting, but it’s one of the most important processes of making a film. Varun [Dhawan] and I are new faces,” she reasons, “We aren’t Shah Rukh or Salman Khan whose films people would watch even without promotion.”

Dressed in blue jeans and boots, her choice of get-up reflects a part of her that stands out the most—her unaffectedness. She has no entourage, no flunky waiting to answer her phone calls. “Yes, Varun, I’ll be there in two minutes,” she says to her co-star who can’t seem to stop calling on her mobile. “I like to do my own thing,” she says, “What’s the point of having a thousand people around to help you? It’s just more confusing.”

With three back-to-back hits in her kitty, the pressure to deliver is a lot more on her than on Varun Dhawan, and she considers it a compliment. “If people expect better from me every time there’s a new film, there must be something right I’m doing.” Plus, what makes this one special is that it’s an out-and-out love story. “I am not clichéd, but I am quite a heartthrob,” she says, “If real love happens, I would put love over work any day, and people who say they don’t have time for love are lying.”

Alia leads a life that’s a lot busier than that of a typical 21-year-old. “I get to see her just for two minutes during her morning coffee. I learn about her love life through the papers,” says mother Soni Razdan, who misses the time she used to spend with her. “I think it’s been the toughest on Mum. She really misses me because I’m working most of the time. But it’s no big deal. I take my time out to party too!” says Alia unapologetically.

“With Alia, our entire household was very certain that she was going to be an actor from the very beginning. In fact, she was alarmingly clear about what she wanted to do ever since she was very young,” says father Mahesh Bhatt. Both parents fondly remember the cautiously choreographed dance shows Alia would put up for her maternal grandparents every weekend as a kid. “She’s a performer, always was,” says her mother.

Few know that Alia’s first brush with the camera wasn’t Karan Johar’s student drama, but Sangharsh (1999), written by her father. She was six years old then, and played a young Preity Zinta. “She led a very normal, non-filmi childhood. In fact, the very first time she came onto a film set was when we were shooting Sangharsh,” says Bhatt. It lasted just a few hours, but it made her want to spend the rest of her life under the arclights. “Alia once dropped by on the sets of Jism to say ‘Hi’ to me on her way to school. We were shooting a sequence with John and Bipasha at a restaurant near home. I still remember the look on her face that day. It was almost like she knew this is what she wanted to do.”

Many would think it’s easy to dream the superstar dream if your father has been one of the most prolific filmmakers of his time. But being the daughter of Mahesh Bhatt had its own challenges. Unlike stepsister Pooja, who was launched by her father in Daddy (1989), Alia did not have the luxury of her Dad’s creative vision. Bhatt had quit directing films in 1999 and so Alia had to find her own way.

“When Karan came to my mother with Student of the Year, I was a little confused because I was still studying,” she says, “But it was too big an opportunity to let go. I finished my exams and started training for the film.” Though the film was a hit, Alia was labelled ‘a girl who’d hit films before she hit puberty’. Her age was the butt of many jokes, not to mention her lack of general knowledge (telecast on Koffee with Karan). “Yes, I may have debuted two years too early, but who would let go of an opportunity that big? I may not have gone to drama school, but I’m getting on-set experience with directors and that is very valuable,” she says.

‘Thanks for not helping me at all,’ she wrote on the first autograph she ever signed after her debut success. It was for Dad. “That was an unforgettable moment for me,” says Bhatt, “Pooja got a spectacular debut in Daddy, but the difference is that Pooja was a reluctant actress and Alia isn’t. I don’t think Student… really challenged her emotional quotient, but it was the induction she needed into films.”

Unlike her father, Alia did not need sharp words to silence her critics. Her second film was a choice bold enough to do the job. Having pranced around in a dangerously skimpy school uniform, Alia transformed herself into a dishevelled wanderer. “She came with no training, hence no judgement, and that became her biggest strength,” says director Imtiaz Ali, who wasn’t really sure if Alia was the right choice to play Veera in his film Highway. “One day during the shoot, I saw her interacting with the locals in Kashmir,” he adds, “I thought she could never be one of them, but slowly I discovered the nomad in her. She’d proven me wrong.”

It was a tough role. “The beauty of the film was the fact that I was so new and confused. I did not know what the hell I was doing,” Alia confesses. “Highway brought people like Shabana Azmi to my doorstep raving about her performance,” adds Bhatt.

The more Alia started to discover herself as an actor, the more her relationship with her father deepened. During her growing up years, as she says, he would make ‘special appearances’ in her life, but they’re really getting to know each other now. “I was more or less a single parent for the longest time, till Alia and Shaheen (her sister) grew up because Mahesh was too busy with work,” says Razdan, “He never really took an interest in their lives when they were kids.”

“My father… would come to school and be completely confused about what standard I was in,” recalls Alia of his appearances during her parent- teacher meetings.

Bhatt doesn’t have a defence. Nor does he have any regrets. And he feels she has begun to see life from his vantage point as well. “This morning, she was listening to songs from my films. I feel like she understands cinema like Arth and Saaransh more today. She cries every time she watches Zakhm. She now knows what it is like to be me; to have uncertainty as a constant shadow… I’ve been out there in this business for 40 years. I’ve survived many upheavals, and today my daughter happens to be walking beside me. We connect on a far deeper level today, but not so much as father-daughter. She listens to my opinion, but more as a filmmaker.”

Alia appreciates how her dad never treated her as a child. “He’d always have grown-up conversations with me. He’d make me listen to a song and ask for my opinion.” If there’s one thing he’s taught her, it is to be brutally honest with her words and choices. “I come from a family where if you are pretentious, you’d be told you are pretentious,” she says, “Dad told me, ‘Alia your tone’s becoming monotonous, graph it.’ Which is why I hate being cautious with my words. I see so many of my contemporaries delivering the same answers to the same questions every day. It’s boring!”

They do have disagreements, but that does not impact their choices. “I’m dying to do a Rohit Shetty film,” she says. “I think she’s capable of a lot more than what this industry has to offer,” he counters.

“I always tell Alia that productive careers don’t happen by chance. You have to have the ability to reinvent yourself and reconstruct your persona. Only he who has that appetite for the unknown can court uncertainty,” says Bhatt. “He’s unique. His films have 500 Mahesh Bhatts in them and that’s what I love about them,” says Alia.

There is, of course, the question of their working together. Will they? “I may write a movie for her,” says Bhatt, “I would be lucky if she’s part of something that I do.”