What is it that makes her one of Hindi cinema's originals? Tabu talks about her new movie Drishyam and more 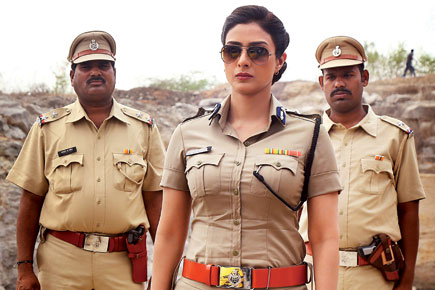 How many national award- winning actors who are critically acclaimed for most of their performances will tell you that every other profession other than acting has tempted them? Well, Tabu will. The actress has always been known for her atypical approach to films, but she is excited to see what other interests she could pursue. Jokes apart, Tabu tells us that during the last three or four years, she has been constantly thinking of the skills she possesses beyond acting. “I really want to develop those,” she says, adding, “I think I could make for a good research analyst. Also, when I took up one of the aptitude tests online, I was told that I would be good as a detective as well,” she laughs. She is also good with learning new languages, and enjoys travelling. “But I will leave travel for pleasure, not as a job option,” she smiles.

The Tabu we meet is not the one her screen presence would have anyone expect. The more one sees her off- screen, the more one is convinced that she is nothing of the persona she has projected over the years. She is fun, talkative, loves to laugh, has a great sense of humour and loves out-and-out commercial cinema. Unlike the serious, almost always angst-ridden roles she has played in several of her films— Haider, Maqbool, Chandni Bar, Life of Pi, The Namesake—Tabu is perhaps someone who leaves her off-screen image behind as soon as the director yells ‘Cut!’

It seems a surprise, given that she is an actor known to become her character for the camera, more or less, while most actresses only become heroines. She is a talent powerhouse, and one synonymous with quality cinema. The thing about Tabu is she doesn’t take any of this seriously. She does her job and does it well, and has been doing it for years. “I came into acting by chance, but once I was here I wanted to do everything to the best of my ability,” she says. “I did not want to leave any room for complaint from anyone.”

Tabu is a classic case of a person who saw dreams fulfilled that she wasn’t even aware of. She has been in Mumbai for several years now, and is happiest at her Lokhandwala pad in Andheri. Dressed in a beige kurta and churidar, she is lounging around her bedroom, enjoying the breeze blowing in. “The weather is perfect to just relax,” she says. But relaxation is something her upcoming release isn’t quite letting her do. She has been out and about promoting Drishyam, her latest flick with Ajay Devgn.

After Haider, this is her next release, and she is happy that this is an entirely different character she got a chance to portray, nothing like she has done in the past. “You cannot slot her into anything,” she says, of the tough policewoman she plays. “She is more aggressive, she is not black-or-white, but real. She is cold at times, very blatant and also not emotionally malleable. And she is authoritative.” Even for someone given to experimenting with roles, Tabu saw it as a new challenge to take up.

In the midst of the interview, Tabu’s pet chihuahua comes running to her for attention. She calls him Chinno, which in Telugu means ‘little’. “He was christened Chinna Reddy,” she says, a smile flashing across her face. She cuddles him to his obvious delight. Tabu looks up, saying, “Pets are so comforting. They teach you so much over time and about life.”

Over the last four or five years, Tabu has been reflecting on the learnings of her two-decade long career as well. She speaks of a crucial shift in the way she deals with her varied experiences as a thespian. “There is a distance I can maintain now from my character. I disengage when I want to, and I move on rather quickly from the characters I have played now and seep into another one,” she says, offering a contrast to her earlier days, when she used to hold on to characters for long and often found it hard to let go of them. After doing an assortment of roles, if there is one dream role she aspires to, it’s that of a sci-fi character.

Tabu was born and brought up in Hyderabad, a city she still visits whenever she can. Her mother is currently with her on a visit from Hyderabad, and Tabu is pleased to be pampered. She has been away for a long time. The younger sister of actress Farah Naaz, Tabu made her Hindi cinema debut in a small appearance in Bazaar back in 1980. Later, in the film Hum Naujawan, at the age of 14, she played Dev Anand’s daughter. While her debut as a lead actress was in a Telugu film, Coolie No 1, it was one of Boney Kapoor’s big budget projects Prem that she signed on for her main Hindi debut. “Shekhar [Kapur] asked me to do the film. He pleaded and cajoled me to do this,” she recalls. “When I finally gave in and took this career up, Shekhar himself vanished from Bollywood,” she laughs.

The film Prem—released in 1987 by the producer Boney Kapoor along with his other magnum opus Roop Ki Rani Choron Ka Raja—took eight years to complete and turned out to be a huge flop at the box-office. Fortunately for Tabu, offers had started pouring in much earlier, and her worth as an actor was assessed on the basis of her talent rather than her first film.

It was Vijaypath with Ajay Devgn that brought Tabu into the limelight of mainstream cinema. Danny Denzongpa, who was also part of the film, recalls how Tabu, despite being a newcomer, was utterly focused on her job at hand. “One knew from a first glimpse that she was capable of much more,” says Denzongpa, “but she always made sure she gave her best to every shot.”

This was followed by films such as Gulzar’s Maachis, Priyadarshan’s Virasat, the Malayalam film Kaalapani, JP Dutta’s Border and several more. There were also films such as Biwi No 1 and Chachi 420. “Many people think I took these conscious decisions to do films that had me playing strong women characters. But that was not the case,” confides Tabu. “I just did whatever came to me, and I was happy doing whatever I was doing. For instance, I was shooting Prem with Priyan sir when he told me about this Malayalam film he was working on. He asked me if I would be interested and I was more than happy to go and explore that world. So I went down South and did Kaalapani.” She wasn’t stuck doing Hindi cinema alone. She was open to films that excited her, and that ranged from a Saajan Chale Sasural with Govinda to the Telugu film Kadhal Desam, for which she even wore a swimsuit.

She herself doesn’t remember when she started getting slotted as an actor who did women-oriented roles and she wasn’t pleased to find herself so typecast either. “It is always great when you get a chance to portray different emotions or shades and not just look good. It’s not that women-centric films weren’t made earlier, I think they are just more visible now. Also, as for me, seems like they wanted to slot me in a brand and they found one when I did films like Chandni Bar, Maqbool, Astitva, etcetera. Even in a film like Hera Pheri, which was a comedy, I had a strong voice,” she says.

Tabu never went to an acting school, nor did she hire a tutor. She has learnt strictly on the job. Ask her if she prepares for roles like hers in Maqbool or Haider, and she is quick to quip, “It is not roller skating or martial arts that I will prepare for it. I will read the script and go and enact it. I think I deserve at least so much credit,” she says. Also, over the years, she has realised that producers and directors come up with offers that work for them. “It is up to you to see how you fit in and then have the confidence to either say ‘yes’ or ‘no’.”

When Vishal Bhardwaj first came to Tabu with the script of Maqbool, he told her that he was adapting Shakespeare’s Macbeth to Hindi cinema. “Trust me, other than the name Shakespeare, there was nothing I knew about the man,” says Tabu candidly, “I hadn’t read a single play of his, and while schooling in Hyderabad it wasn’t even part of our curriculum. I purely went by Vishal’s gut to do this film. I knew there was a lot of emotion at the core of the story and I had a feeling that this would be cutting-edge cinema.”

Bhardwaj even asked her to see some other adaptations for her character, but Tabu didn’t do anything of the sort, preferring to go in with a clean state. “At the end of the day, I have to perform that role. How much ever I end up seeing someone else’s work it is not going to help me. I would rather interpret the character myself and do justice to it.” Years later, when Bhardwaj came to her with Haider, it was history repeating itself, and the character of Ghazala appealed to her as much as Nimmi had.

Tabu’s tryst with Hollywood has been no less interesting. Despite the success of her Hollywood forays like Mira Nair’s The Namesake and then later Ang Lee’s Life of Pi, Tabu is not looking to shift base to Hollywood and get work there. She is happy in her comfort zone. “No matter where I go, I like to come back home,” she says, making it clear that while she is open to doing all kinds of films, Bollywood is her base.

In the assessment of trade analyst Taran Adarsh, it is author-backed roles that Tabu does really well. “She knows what her strengths as an actor are and she capitalises on it,” he says, “She is very emotive and extremely passionate about her character, and that is perhaps what comes out on the screen so beautifully.”

As Tabu explains, “It is because I never wanted to be written off once I started work.”

As an actor, she is looked upon as a leader of women-oriented cinema, so does she then also feel a difference in how the two genders are treated in Bollywood? Tabu ponders it for a moment, and then says that such differences are prevalent everywhere and are unlikely to end. “A man and woman are different and will be treated differently. But that doesn’t mean that I want to upstage them. In life, just do what you are best at, and forget the rest,” she advises.

Post-Drishyam, Tabu will move on to Abhishek Kapoor’s Fitoor, a film in which she plays the role of Ms Havisham from Charles Dickens’ Great Expectations. Yet another author- created role, yet another challenging literary character, but Tabu, as we all know by now, will take it on with a smile and walk away with yet another power-packed performance.