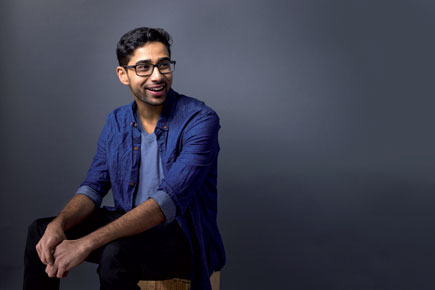 The recently concluded Mumbai Film Festival brought together some very prolific film personalities. Some new, some old, some famous, some debutants—it was a melting pot of storytellers from across the globe. Among them was a boy who most of us had seen on a boat adrift in the ocean, with a magnificent tiger for company. When Suraj Sharma walked on to the front of the hall after the screening of his latest film Umrika, he was almost inconspicuous. This wasn’t Ang Lee’s popular Pi, but a 22-year-old new actor scanning the crowds, eagerly awaiting the response to his first Indian film.

Now how did Suraj decide to go from the massive Life of Pi to a small indie venture that was almost never made? “I’m taking a flight to New York tonight. You want to Skype?” he eagerly asks when requested for an interview. We eventually end up chatting over a cigarette and a bottle of water outside the lobby of the JW Marriott Hotel at one-thirty that very morning. “I’m not worth it,” he says still trying to fathom if a writer was actually losing sleep over him. “We’ll see,” I replied with a smile. Dressed in a white shirt, a sharp black coat and trousers, one can tell that this the first time Suraj was in Mumbai without a big Hollywood studio or director backing him. He’s nervous, but insists on honest feedback. “Tell me, what did you think? You know this film was always on the edge, banegi ki nahin banegi (will it be made or not), no one knew. So the fact that it has reached here and we are talking about it is a big deal in itself,” he says.

Set in the 80s, Prashant Nair’s Umrika is about the big Indian dream of making it across the seven seas. With a story of two brothers from an Indian village up north, the film sells us a popular tale, but is honest in the telling of it. For anyone growing up between the 70s and 80s, Umrika is a slice of nostalgia creating a timeline of everything that defined the decade, be it Indira Gandhi’s Emergency or Amitabh Bachchan’s big fall.

It’s already won the audience award at the Sundance Film Festival and is making waves across France, Australia, New Zealand and Germany, sticking to the screens way longer than most Indian films are expected to. “When I heard the script, it was very raw, but Prashant and my producer Swati Reddy had so much conviction in the project that I immediately said yes,” says Suraj. As Ramakanth, the village bumpkin who comes to Mumbai in search of his missing older brother who had left for America years ago, Suraj is brutally believable. He plays the teenager who wears oversized shirts, does kushti, craves for his mother’s roti and speaks Bundeli as if it was being served in his backyard. “It was by no means an easy film to make. We were shooting for 15-16 hours every day not knowing when we’d be thrown out of which location. We shot at a chawl in Mumbai in between people’s sandas breaks because most of the scenes were in the community loo. We created a whole village in Satara with charpais and chickens and everything, not knowing if we’ll have to dismantle it the next day. But when I’d get a chance to sleep on that charpai in between shots with the wind blowing in my hair, I felt like it’s all worth it,” he says.

Now who could tell that this is the same Delhi boy, who was chanced upon by Ang Lee at an audition five years back, and became one of the most famous Indian faces abroad even before he turned 18. “Being brown, being non-muscular and having two left feet isn’t easy for an actor. I never saw myself as one of the muscular, dancing heroes of Bollywood because I can’t do what they do. Which is why it makes me so happy that the indie film space is growing in India,” he adds consciously brushing off a hint of an American accent that peeps in between words.

Despite a dream start to his film career, what’s refreshing is that Suraj sounds as anxious about what lies ahead as any regular boy his age. It’s no secret that after Life of Pi, nothing was ever the same for him. “I hate what happened to me almost as much I love what happened to me. It’s like once I came back I felt as lost or perhaps even more than Pi on that boat,” he says.

From a regular rebellious teenager growing up in Kalkaji in New Delhi, Suraj was suddenly a famous Indian boy who had struck gold, but did not know what to do with it. “I grew up in a middle class family where both my parents were academicians. We lived in Kalkaji where there were the richest people of the city on one side and the poorest slum dwellers on the other. The rich kids dreamed of becoming goondas and the poor dreamed of becoming rich. Somewhere in the middle of all that, there was a major identity crisis and the result was a lot of very angry youngsters. I barely even watched films while growing up. In fact I wanted to be a footballer, but that dream crashed and burnt.”

Thanks to that and many other things, Suraj confesses to having been a lot more than just a rebel without a cause. Rebellion that his first filming experience helped him deal with. “My brother and I have burnt things, run away from home, threatened to do drugs if we did not get to play football, done everything possible to create the most difficult situations for our parents. So when Pi happened I did feel uprooted, but I also felt that all that angst was being channelled without me even asking for it.”

The film displaced Suraj from his environment and his personality in a way that he never imagined. After a year of shooting Pi he wasn’t exactly the wide-eyed Delhi kid who thought he was still auditioning through two months of pre-production. “I was in isolation for two months to prepare for Pi. I was on a tuna-lettuce-tobacco diet for weeks. I did not know what acting was. I was made to live that part. I did not speak to anyone. I got a bit dark from within. When I came back home after all that, I was different. People around me were different. Many people who I thought were friends gave up on me.”

It was success that came to him too early, and too unexpectedly. Going back to school in some way brought balance into his life. “It took me a year to get out of that phase. One day I was at this Oscar luncheon with Bradley Cooper and Robert De Niro on my side and the other day I was attending a philosophy class at St Stephen’s. Even now I think I was sleep walking through all of that. What kept me sane is that my family and some very close friends treated me exactly as they did before and I came back to being myself.”

He was still dreaming, but his dreams were now different. Under the wings of Ang Lee who he fondly refers to as Buddha, he found a world he felt he had been looking for always. “On set he would explain a scene in super detail without losing eye contact, what he wants and the feeling that he wants me to experience. We’d do yoga together and I realised that everything about acting was related to the breath. But I knew that acting wasn’t all I wanted to do.”

He’s now studying film at New York University and hopes to do everything, from writing, to editing, to shooting films his way. He remembers being stalked by a few girls from college during freshman year as the boy who played Pi, but he’s gradually learnt to deal with that attention. “People would initially come up to me, strike a conversation and start filming me thinking I won’t notice. So I got really attuned with who is watching me and stuff.” Despite all this he kept his innocence intact, which shows in his performances. In Million Dollar Arm (where he played the true life story of baseball pitcher Rinku Singh) or Homeland (he essayed the vulnerable Pakistani boy Aayan), Suraj stood out as the young man who brought a sense of rawness to his parts and isn’t afraid to make mistakes. “I don’t think I can act. Which is why I work with people who I know will guide me. When I did Homeland everything was too fast. The script was given to you just three days in advance and there was no rapport with the director because every episode was being shot by someone new. It really threw me off. I wish I could have given them a better performance,” he adds.

Suraj will pass out of film school in a little over a year and can’t wait to get back into the real world. “Many people think I got it easy. I am definitely blessed, but my challenges are no lesser than anyone my age trying to make a dream happen. I’m still struggling to pay for college like anyone else,” he says. He ends our early morning chat with a quote by one of his idols, who recently was in his college for a lecture. Robert De Niro said to him, “No matter what happens, stay yourself, stay smart and don’t believe what anyone says.”