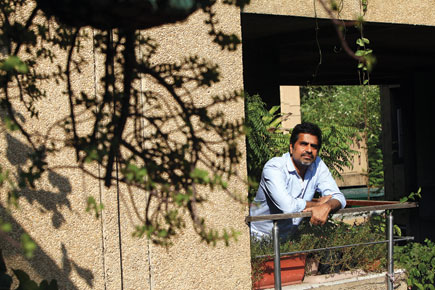 The city was unrestrained, impatient. The invasive blares of car horns pierced the smog, punctuating the potential quiet of the twilight hour, reminding us of the unmindful urgency of its dwellers who each had places to go, things to do, quite unlike the more desolate setting of the poem by the 12th-century saint, Gorakhnath, ‘Shunya gadh shahar, shahar ghar basti’ (In the empty fort, a city, in the city, a settlement). As we sit on the red-brick steps adjoining the new wing of the National Gallery of Modern Art, New Delhi, the erstwhile Jaipur House, located close enough to the historic Purana Qila, artist Sudarshan Shetty recites each doha, occasionally pausing to emphasise intricate subtleties. “If the city is empty, the fort is empty then where is the question of someone being awake or asleep?” he explains, going over the second line of the poem’s first convoluted dyad: ‘Who sleeps, who wakes?’ “Gorakhnath enters a hugely speculative space that includes this osmotic understanding of things,” Shetty continues, not breathlessly, but with the meditated zeal of one who had swallowed the poem whole, internalising not just its essence, but also the boundlessness of its imaginative existence. “When you look at the form of the doha, very often the first line will establish an image while the second will establish a seemingly diverse image, which may have no connection, but it comes together; it’s mutually inclusive; in fact it’s a way of approaching the idea of the binary as inclusive,” he says as we warm ourselves sipping single malt from a plastic bottle and smoke cigarettes, conscious of the handiwork taking place next door; nails being hammered into wood, walls being whitewashed, sites being provisionally created to shelter work ideated by him over a three-year span.

Shetty appears anomalously calm for an artist anticipating the opening of a show at the country’s most prestigious exhibition space. When he was offered the NGMA premises to mount his work, the Indian art world expected him to use both the old and new wings, given the enormous scale of his sculptures and installations produced over at least 20 years. Why didn’t he oblige, I ask. Why choose just the new wing when he could have had both? “I’ve been thinking about this show for about three years, so it was a natural thing; this is a big space, an important space, and I’m not ready for a mid-career retrospective. I don’t feel mid-career,” he confesses. “I kind of hate looking at my older works. People call me to repair things and that’s like the worst. It’s really tedious and painful.” Despite the anxiety he feels over revisiting his previous work, Shetty is compelled to engage with the continuum of thought connecting past to present exemplified through his concerns with the subjects of time, absence, fragility, archaeology, and the deliberate monumentalising of the meaningless.

And poetry. Shetty’s relationship with the written word was always abundantly obvious through his conception of the title for his solo exhibition; from ‘Consanguinity’ , his break-out show in 2003 in Delhi that established him as a formidable presence on the Indian contemporary art scene, to the critically acclaimed ‘this too shall pass’ that inaugurated the Mumbai-based Dr Bhau Daji Lad City Museum’s curatorial programme (headed by its director, Dr Tasneem Zakaria Mehta, who invited select JJ School of Arts’ alumni to artistically negotiate with its in-house collection to create new narratives, new visual methodologies for interrogating local histories). In 2013, Shetty created five hand-carved reliefs depicting two elephants in a jungle, which he displayed alongside purchased terracotta objects to articulate the ambiguity of language as evidenced through the act of translation and the contestable category of the excavated object. Entitled ‘Path to Water’, each relief bore an interpretation of a single line by 12th-century Sufi mystic and musician, Amir Khusro —‘Bahut kathin hai dagar panghat ki ’ (The path to the well is rough). Each translation “falls short of what it could mean, it’s open-ended”, he once said in an interview.

Shetty’s much anticipated solo at the NGMA that opens on 16 January could be viewed as a visual illustration of Gorakhnath’s poem. The Mumbai-based artist directly references it through his title, ‘Shoonya Ghar’, while conveniently collapsing the phonetic boundaries between the Hindi words for fortress and house through the use of the letter ‘r’ instead of ‘d’. “I was already working with dismantle-able structures, I thought why not literally approach this piece of poetry in that sense?” he says.

The first intended object on display is an expansive arched structure with a long corridor that leads to a potential dwelling place. It is both an elaborate artifice and an edifice, with decorative columns collected by Shetty from local markets across the country and a façade that is in fact a conglomerate of wooden counterparts found in similarly diverse locations. The assemblage is an embodiment of Gorakhnath’s poem and envisions the city’s 10 gates the saint speaks of that symbolise the bodily senses through which various temptations threaten to enter. “Poetry becomes like an anchor,” Shetty says. “The thing is, a lot of people, when they ask about your work, they expect that all the objects refer to empirical evidence, but here is a poem that says everything is real and nothing is real.” Can both these positions be included within the same space of experience is the existential question Shetty posits as he seeks to subversively critique the very idea of putting together a show at the NGMA. “Is it possible to include the idea that it is an artifice in the making of the show?” he suggests.

The grandiose, impeccably made structure was originally assembled at an abandoned quarry near Lonavala, in the Western Ghats of Maharashtra, a site Shetty, after having first discovered, dreamed of owning. “I was thinking about the fact that there’s this cavity made in the mountain where things have been taken away to build other things,” he says as he explains the rationale behind his symbolic gesture to “build something anew”, again, from diversely collected material, that would also eventually be dismantled and taken away, leaving behind only the memory of the event having transpired.

As the process of construction was underway, Shetty worked with about nine actors and made a film, not so much to document the production as much as to play with the linearity of cinema. The hour-long film forms the crux of ‘Shoonya Ghar’. “It’s seemingly unreal. You do know that these are actors, but the film is interwoven with shots of the construction, with the five people I work with building the structure in the background.” Some scenes show an advanced stage of fabrication while others reflect a more primitive phase. A separate room within the venue has nine TV screens relaying the testimonies of the nine actors who each embody the nine rasas integral to the Indian classical tradition.

What is the purpose of exhibiting the structure? I naturally ask Shetty. Was it to allow for a de-constructed sense of a set? Was it to establish the role of the building as a silent protagonist? “That’s the question I’m trying to ask,” he says. “What does it mean to be an artist or a producer of objects?” It’s a question Shetty believes he has been asking for more than a decade, “having spent so much energy in making things with a sense of meaninglessness attached to it”.

Shetty is simultaneously interested in achieving a state of minimalism and echoing a position of seeming emptiness through abundance and grandiloquence. ‘What is the relation between building and consciousness?’ anthropologist and writer, Vyjayanthi Rao, asks in an accompanying essay. ‘[Shetty’s] film involves building and construction alongside characters enacting scenes in which drama mobilises conventions of representing birth, death, dance, play, music and violence in local traditions of storytelling.’ As if conceding to the inclusive nature of the poetic binary in the dohas of nirguna poetry, the genre of Bhakti poetry practiced by Gorakhnath, the film’s conceptual form ‘opens the possibility that these elements can be taken apart and placed in opposition to each other to discover a relation between what is real and what is imagined.’

‘Shoonya Ghar’ is a poetic, prophetic expansion of Shetty’s long-standing intrigue with the secret and imaginative lives of objects. The artist seems to have rejected the temptation to indulge the artist ego by deliberately scaling down his enterprise, confining it to a single site, and then challenging the self to create a whole new body of work instead of deciding to revisit and rework that of the past. There is an admirable modesty to the gesture that must be celebrated. But Shetty not only refuses to dance to the tunes of the commercial art market, he seems keen to engineer a provocation against its consumptive hunger. In a globalised era where the object is often a stand-in for concept, he goes a step further to invest in its materiality. He stresses finesse, strives for the cause of the object’s mobility, perfects its form so that it is not only tangible but also animated, whether through ingenious mechanisation or mediated human contact. He then subtly critiques the very act of memorialising artistic thought through his appropriation of Gorakhnath’s poem, which in itself is a paean to the mystical notion of detaching the self from the material world and meditating on the ‘Indivisible One’. The body, it seems to espouse, is simply an architectural concept, when ‘the body sleeps, the spirit wakes’.

Soon after the madness of January— catalysed by the upcoming eighth edition of the India Art Fair—Shetty will have to retreat to Kerala to prepare for the third edition of the Kochi- Muziris Biennale. He was unanimously appointed artistic director for 2016-17 by the advisory board last year. This will be his first official curatorial role. “My position comes from my limited understanding of what is the role of a biennale and what is its function, which is still a question,” he had said in an interview in 2015. “What is the function of anything when it comes to art? Can you question the function, can you play with it? All that will be a part of my exercise as a curator.”

(‘Shoonya Ghar’ is on view at the National Gallery of Modern Art, Delhi, from 16 January 2016)