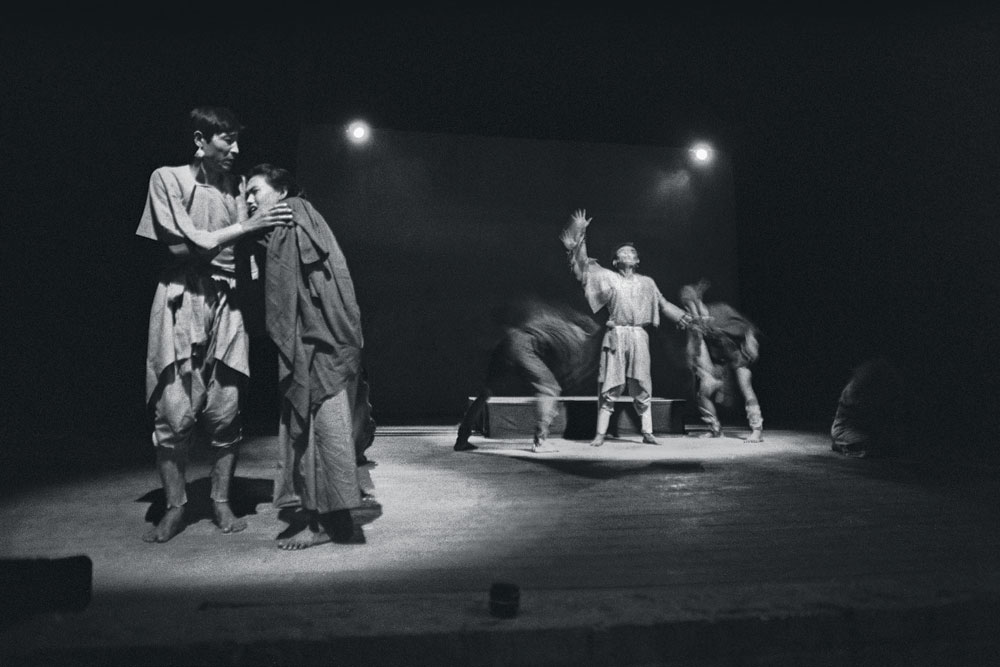 Photographs by Naveen Kishore at the Epic and The Elusive


THE COSMOS HAS an odd sense of timing. Juxtaposing unrelated events, it teases us to decipher meanings. We oscillate between present and past, wondering how to make sense of it all.

Earlier this month, the government announced its decision to withdraw the Armed Forces Special Powers Act from numerous parts of Manipur, Assam and Nagaland, citing a significant reduction in incidents of militancy and an improved security situation in the states.

Around the same time, Naveen Kishore’s photography exhibition cap­turing moments from Manipuri theatre during the political turbulence of the 1990s was being mounted at Cymroza Art Gallery in Mumbai. Called The Epic and The Elusive, it has been curated by Mumbai-based poet and critic Ranjit Hoskote and runs till May 16.

Kishore, who lives in Kolkata, could not have predicted the dramatic happenings on the political stage any more than he could have imagined that his photographs—which originally appeared in Issue 14-15 of the Seagull Theatre Quarterly (June-September 1997)—would be displayed at an art gallery. They were, after all, shot for the print medium, not to be put up on walls. It was Hoskote’s visit to Kolkata in 2021 that catalysed their transformation into a new avatar.

The now-defunct theatre journal was set up in 1994 as an initiative of The Seagull Foundation for the Arts, with initial funding from Ford Foundation and subsequent support from the India Foundation for the Arts. It took on the mantle of “bringing theatre workers and audiences serious critique, theo­retical analysis, responsible, informed reviewing and information dissemina­tion.” It ran till 2003. Kishore’s collabo­rator on the project was Anjum Katyal. 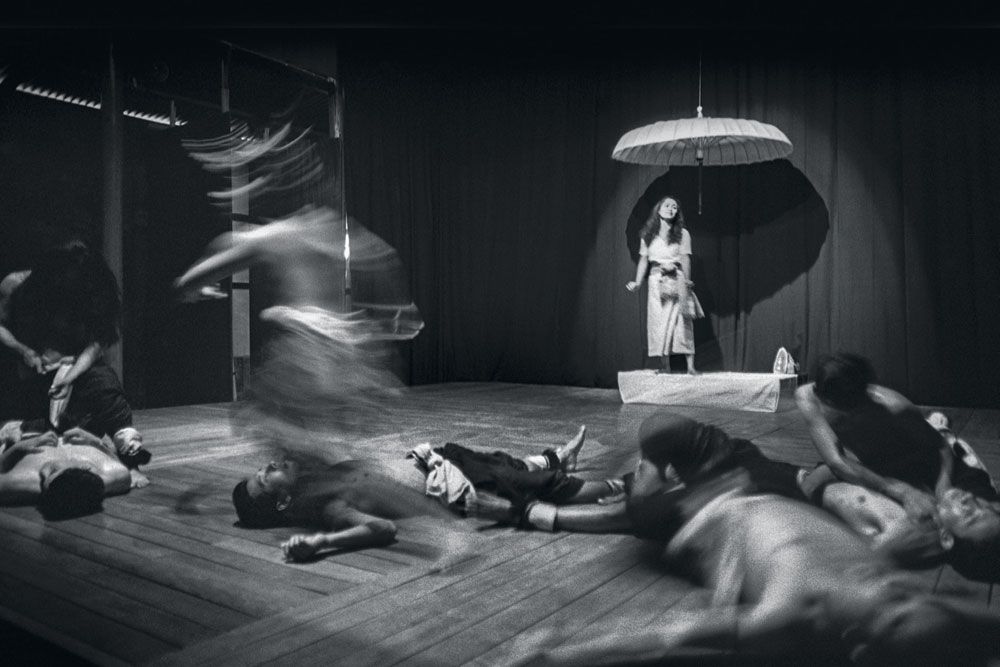 They had a clear mandate. They wanted to look at theatre and perfor­mance as “a social phenomenon which is rooted in and grows out of specific cul­tural and historical contexts”. Towards this end, they directed their energy towards recording oral histories, and first-person accounts—what Kishore calls “good primary material in the voices of the performers.”

As part of this enquiry, they went to Manipur in the 1990s to document how the theatre community in Manipur was responding as it was caught between militarism and insurgency. Kishore recalls, “We wanted to focus on the experimental theatre of that time being created by young people. It was vital work of a political nature. Anjum was the editor, and I took on the role of a photographer. The plays were in a language that I did not know. This created a lot of excitement in me. I had not seen any rehearsals, so I didn’t know what was coming.”

The photographs in his show take on additional significance when their back story is revealed. Katyal and he met luminaries and unsung personalities. They ended up producing a Manipur-fo­cused issue of the journal with contribu­tions from Lokendra Arambam, H Kanhailal, Ratan Thiyam, Haorok­cham ‘Sanakhya’ Ebotombi, Sabitri Devi, Soyam Lokendrajit, Birjit Ngan­gomba etc, many of whom provided oral rather than written testimonies.

“We wanted to focus on the experimental theatre of that time being created by young people. It was vital work of a political nature,” says Naveen Kishore photographer, publisher, theatre practitioner

In the editorial of the June-Septem­ber 1997 issue of The Seagull Theatre Quarterly, Katyal describes Manipur as “intensely theatre active.” She acknowl­edges the richness of the performing arts traditions in Manipur—Sankeertana and Lai Haraoba in particular—which have a religious and ceremonial function alongside dramatic and performative elements.

Katyal writes, “Several spheres of theatre, each a complete system in itself, overlap and coexist: the older traditional performance forms, particularly the Sumang Leela or ‘courtyard’ theatre; the established proscenium theatre; and the ‘modern’ experimental, alternative theatre.” Realising that it would be too ambitious to cover all of these, the scope of the issue had to be narrowed down. The objective was to generate discus­sion; not have the last word.

Those who walk around the gal­lery, looking at the photographs and wondering why the Manipuri theatre groups chose to perform the Mahab­harata, Antigone and The Iliad might find answers in Katyal’s editorial. She discusses how the experimental theatre did not espouse a complete rejection of what came before them, rather they responded creatively to it.

According to Katyal, “the movement of the 70s” was led by people who were incorporating the Manipuri martial arts form thang-ta, as well as folk and clas­sical dance, but also wanted to fashion an identity of their own. They wanted to develop a new language in keeping with “the vastly changed, violence-ridden and chaotic political situation.” They wanted their theatre to engage with contemporary social issues but they also had to develop an audience for this kind of theatre while ensuring that neither funding nor aesthetics were compromised. 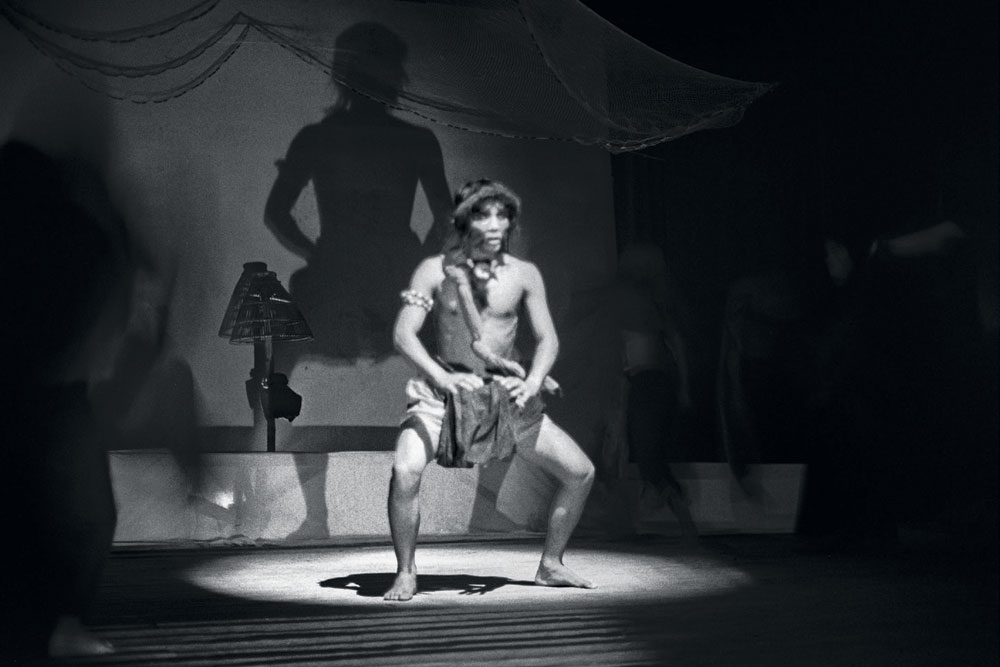 Excerpts from Katyal’s editorial commentary share space on the walls with Hoskote’s brief curatorial note and Kishore’s succinct artist statement but there are no captions accompanying the black-and-white images. Or as Kishore likes to call them, “not quite black” and “not completely white.” He relishes “the possibility of multiple interpretations.” While the “epic” in the title draws attention to the spectacle, the “elusive” foregrounds the spectator.

Kishore seems intent on getting out of the way so that viewers can interact with the photographs on their own terms. After all, he too had to engage in an act of interpretation all those years ago in Ma­nipur. “Personal biases and ways of seeing always enter the process of documenta­tion. What is the point of hiding from that subjectivity? It’s there,” he says.

It is perhaps this outlook that made him seek out, even celebrate, motion in stillness. “I wanted to look at moments of accident, not just incident, when things flow into each other or collide,” he says. This experimentation with shadow and light creates startling forms that remind one of whirling dervishes, bullet trains zooming past a station, and dizzy spells in the summer sun.

He says, “One of the images, which is being used by the gallery in their promotional material, reminded me of Japanese Noh theatre because of the body language. There was perhaps no intention to reference another tradition but it’s nice when things resonate across cultures, isn’t it? Our reading, viewing and listening are so eclectic, and so are our associations.”

Art critic and curator Nancy Adajania, for instance, was reminded of a charcoal drawing when she saw the same photo­graph. Kishore is curious to see how other viewers will engage with his photo­graphs. He feels no compulsion to impose a singular way of reading them. 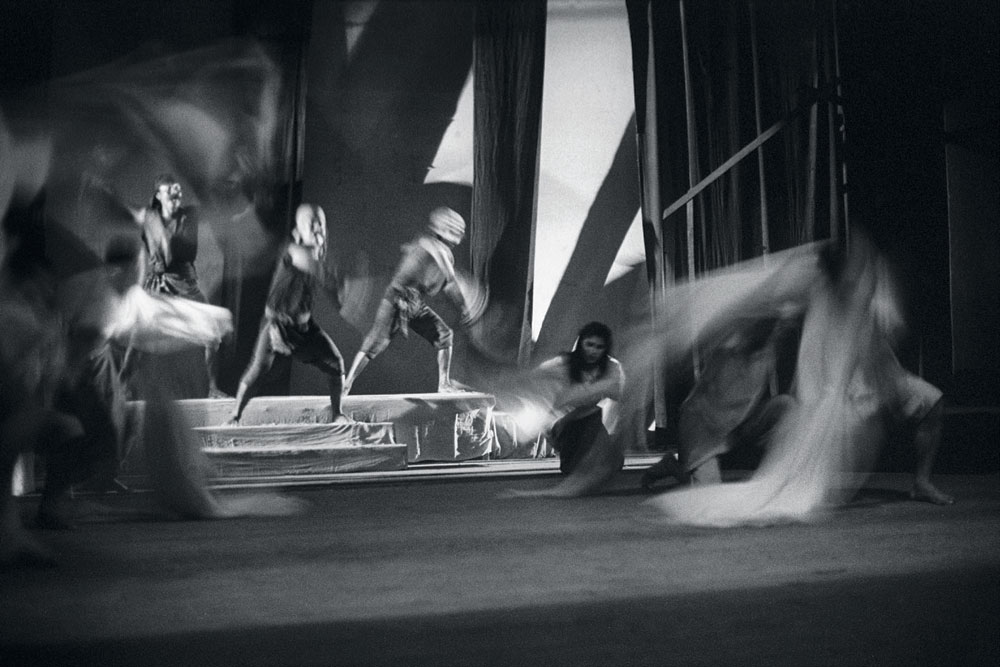 Kishore’s choice of form seems to mirror his politics. In his artist statement, he writes, “The framing is off-tangent. The only way to find a way into the image, the story, the emotion is to choose one of the many points of focus. Never a single point of entry.” This recognition of plurality is perhaps the cornerstone of living in a modern democracy with a vibrant civil society.

Kishore says that his current exhibi­tion of 25 images is “just the tip of the iceberg”. He took many photographs— more than a thousand—when he went to Manipur with his camera.

He adds, “The idea was not to show them all. We are constantly seeing atroc­ity pictures on social media. They are being beamed at us, and we are growing numb. It was to invite people to slow down, reflect.” He succeeds at the task, without a doubt, for the photographs never reduce the people of Manipur to the horrors they have experienced, and the pain they have suffered. They high­light creative practices, and the tension between resistance and restraint.

“I wanted to look at moments of accident, not just incident, when things flow into each other or collide,” says Naveen Kishore

Hoskote says, “I have always admired Naveen as a photographer but he has not had much time to focus on this part of his practice. It’s a problem when you are a polymathic figure, and everything you do is such a substantial achievement whether it is being the founder of Seagull Books, or being a poet, curator and activist. Naveen’s photographs of Chapal Bha­duri, the Jatra actor, are well-known, but his work from Manipur is quite a revelation.”

Hoskote hopes that viewers will go back from the exhibition with a greater appreciation for what Kishore has contributed to our understanding of life in Manipur, and other places that have been held hostage to violence in differ­ent forms. To the outside world, this violence is reduced to victimhood, but more importantly, it produces modes of survival and solidarity, compassion and critique.

One hopes that there will be a sequel to this exhibition, taking up the ques­tion of gender in a more direct manner. The Manipur issue of the Seagull Theatre Quarterly has some pertinent material that could feed into such a project. Katy­al’s editorial note underlines the compli­cated nature of women’s participation in Manipuri society—women running markets, and being on the frontlines of activism, but also heavily censured for the transgression of norms. 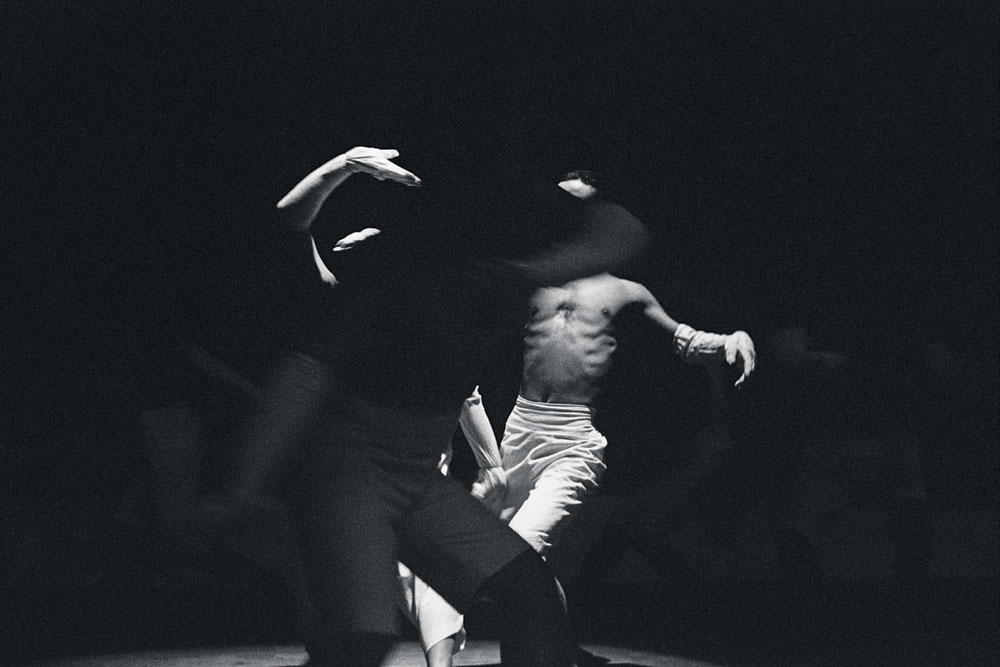 The Seagull team had heard of all-women performance troupes but could not see any of them perform. They did, however, get to meet some actresses from the 1930s and 40s. This meeting was arranged by scholar and revolutionary Arambam Somorendra. He managed to gather many of them— including former peers and rivals—at one place in Imphal.

Katyal recalls that these “grand dames” dressed up for the occasion, and spoke animatedly about their pre-retirement years. Some sang and delivered snatches of dialogue from plays. The history of Manipur needs to be told through the voices and perspec­tives of these women too, not just Irom Sharmila and the Meira Paibis whose protest and dissent seem more explicit.

Katyal writes, “They reminisced about the inter-war years, when foreign soldiers thronged the theatres, the time when they sang and danced their way into the hearts and memories of a loyal audience, often becoming synonymous with folk and mythologi­cal heroines in the popular mind.” Each woman seems to have been an archive unto herself. As the meeting was about to end, one of them told Katyal, “Come and spend a few days with me, then we can talk freely. My biodata alone is 40 pages long—how much can I tell you in half an hour?”

Kishore’s exhibition perhaps needs to be viewed in the same spirit. These photographs are just the beginning of a story that will continue to unfold as more people from outside Manipur engage with it through the lens of its theatre and poetry, fiction and art. Kishore’s exhibition shows and reaf­firms that creativity thrives alongside, and in spite of, conflict.

(The Epic and The Elusive by Naveen Kishore runs at Cymroza Art Gallery Mumbai, till May 16)