Kohelika Kohli, architect and interior designer, is inspired by India’s cultural heritage but is not trapped in it 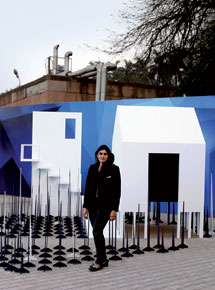 Through the day, the mother had watched her little daughter carry pails of water to their suite in Goa. They were staying near the sea then. In the evening, the mother found the bath tub full of pebbles and sand, and little sea animals. The daughter was mesmerised by the sea, and this was her own encounter: the sea in a bath tub. “She was excited to see the fish,” her mother says, “Now she dives.”

Years later, the renowned architecture and interior design professional Sunita Kohli would sense other encounters in her daughter Kohelika’s work. Like in an open-air entrance she designed for their weekend home in Damdama, Haryana. She had seen one in Italy long ago, and it stayed in her subconscious. Isn’t it beautiful how they float back up—old experiences in new forms? As Marcel Proust put it, ‘Remembrance of things past is not necessarily the remembrance of things as they were.’

“It’s amazing how impressions get mutated by the architect’s own creativity,” says Sunita. That’s how Kohelika Kohli, now 35, approaches architecture and design. It is mostly psychology, says the daughter. It is about ways of seeing. Like it is not just buildings, she says. As CEO and creative head of K2 India—named after the world’s second-highest peak that’s famously harder to scale than Everest— she is one of the youngest in her field to have earned a reputation as a fine interior designer and architect. With mother and daughter working as a team, K2 India has done projects in Egypt, England, Bhutan, Sri Lanka and Pakistan. In Delhi, the design firm that specialises in bespoke furniture has restored the interiors of British period buildings like the Rashtrapati Bhavan, the Prime Minister’s Office and Hyderabad House.

During her talk, ‘How My House Drove Me Mad’, at the India Design 2015 conclave held in Delhi, she said design was only 30 per cent talent and 70 per cent psychology. She had wanted to be anthropologist once, and then followed in the footsteps of her famous mother. It was tough at first to get projects. But a man in Ambala gave her a chance, and that’s when she saw how psychology could help. She had to understand the man, and that’s the fun part of design, she says.

Then, they designed their family’s weekend home, and that she says was a labour of love. And love is the most difficult motivator. Everyone is attached, and everyone has an opinion. They have their pasts, and their perceptions, and giving one another space was something only love could have achieved. That’s when she began to let emotions filter all the complicated design processes, the theories of architecture and the math of proportions. There’s something about homes, she says. They make and break relationships. You must understand space, she says.

Often, ways of seeing make all the difference. It could be the way a shell looks, or how a couple lying together looks. The forms and shapes, the passion, the ways of being. And then, there is a respect for nature. Like the way she collects stones. She has inherited a beautiful shaligram from her mother. This is placed next to her books of travel and poetry. Design is poetry, too, she says. That’s architecture to her. Most of the time, a thing of beauty is lost in the complications of processes.

“I like travelling, and we are deeply rooted in our culture, but with a sense of evolution,” says Kohelika, “My client gives me the brief. That gets the process started, and then the excitement begins. There’s never a finality to design. You can always change it.”

Sunita and Kohelika, who merged their respective design firms in 2010 to set up K2, both believe that design is not about cosmetic changes. Kohelika says her methods in design are about being functional and contemporary. Like their installation at India Design 2015. They call it a “space”.

It has a long table made of a tree trunk, divided into three parts, with an old leather-bound book marked ‘Journal’ in a silver holder. Warming it all is a fire in a glass enclosure, on white stones. Dishes and other objects from their personal collection find place too, providing a context. On the shelves, books and journals are chosen with care: the poetry of Faiz Ahmed Faiz, works of literature, design tomes and reminders of passages and stories read out by the mother to the daughter, growing up, encounters that would nourish her imagination. It is a space that a nostalgist could identify with, a space a romantic would relate to, one with a thousand worlds within. Everything looks as if it belonged here. Everything looks effortless. But Sunita cautions against assumptions. “What looks effortless is not the easiest to do,” she says. There are splashes of colour. Like a rich magenta upholstered chair. And a silver and gold leather settee. Nothing is overplayed, or underplayed. Kohelika says it is about fusion. They love their culture, but they also like the functionality of modern design. The trick is to combine the two to create something unique. Like the space here. “It’s what we are,” she says. “These are expensive spaces. This is lifestyle.”

“There is so much in India,” says Sunita, who was born in Lahore and grew up in Lucknow. Her daughter echoes her. “Everything is a work in progress,” Kohelika says. Design is also about living on, and leaving something behind. Like Kohelika first saw in the ruins of Hampi. You could rebuild from there. You could make up whole lives, she says. That’s the job of an artist.

As architects, they have their own ways with materials and concepts. And yet, their visions merge. They would always travel together, and as a child Kohelika watched her mother recreate the past in her restoration projects, but also noticed how she would not carry the past as baggage, but as an inspiration. They visited Hampi when she about 12 years old, and her mother explained that when people die, they often leave behind something of their lives that lasts forever.

A student of architecture walks by, and touches the table lightly. He wants to know its price. He is amused by the books, and he stands gazing at the bookshelves, and the stones, and the red and yellow tinted bulbs that hang from the ceiling. He is looking for the familiar, and it is everywhere. Here, you could belong. That’s the space they have created. Everything is from everywhere, and yet they seem to belong here. Nostalgia is universal. And it doesn’t mean one must have witnessed the same events, or been to those places, or eras. It is a case of transferred memories, and stories. Here, in the rawness of the table trunk with a glass top, and upholstered chairs with bulbs above, and crystals and rocks, and mirrors mounted in ways that make reflections a mystical experience, there is evidence of meticulous research. There’s no compromise. If the wood needed to be imported from Borneo, it had to be. Or if the bulbs had to come from Canada, they must.

The liquor cabinet is hidden, and yet when she opens it, you marvel at their mastery of opulence. Placed on top of it is a half-head bronze sculpture by Gautam Bhatia. It has tiny men, their hands outstretched upwards, for hair. Are these men in prayer? Again, it is about ways of seeing.

Kohelika, dressed in a pair of denims and a jacket, conveys the effortless sophistication that you associate with New York City, where she once lived. She was a resident advisor at Pratt Institute, a design school, and had free housing in a beautiful part of Brooklyn. In New York, she says, you become innovative with space because there is so little of it. She returned in 2008 to set up her own company in Delhi, and has been working with her mother for some four years now. What they share, says the mother, is a common response to a site, its cultural milieu. “Kohelika has that for people and places,” says Sunita Kohli, who was awarded a Padma Shri in 1992. “She’s very meticulous.”

When they were in Bhutan in 2010 for a project for the SAARC summit, for example, Kohelika got 187 skilled workers and material from India, and they finished the work that would have taken nine months in just three months. Kohelika would work through the night, says her mother.

It was while in New York City, working part-time as a bartender for extra money, that Kohelika started paying special attention to interactions. She loved conversations, and she listened keenly—to strangers, professors, everybody, even what the streets and buildings had to say. Things had a past, and they had a future. What was in between was open to the imagination— of a new future with respect for the past.

In many ways, it’s the imprint of a childhood. And growing up, she remembers having imagined cities, kingdoms, places, people. Vividly. Like writers who create worlds with words. “I see things everywhere,” she says, “If I see a photograph, I want to know what the photographer was seeing or thinking at that moment. For me, there’s poetry in design. There’s constant evolution. There has to be a bridge between what I see and what they see.”

Everything is also about functional relevance. There’s much to play with. Like her mother, Kohelika believes that India’s rich inheritance of design and architecture is what she must work with, though she doesn’t want to be labelled an ‘Indian designer’ because her art is about responding to spatial possibility of any kind anywhere in the world.

In her barsati in Golf Links, Kohelika has created a space that reflects her own tryst with the world. The living room opens to the terrace. There’s a lot of beige, but there is also plenty of pink, rich and bold. There are mirrors, and there are bangles that hang in the bathroom. There are no definitions because that would limit the space. It is a reflection of her—as a creator, traveller, nostalgist, and a futurist. Her parents live downstairs, and her space is her own. They cook, and she says she loves dancing. And mixing drinks. She was a bartender once, remember?

It’s one of those things, she says, and smiles. She hasn’t yet found her most challenging assignment. It would be a performance space, she reckons. “I want to always outdo myself. Wouldn’t that be interesting?”