Slightly More than the Real Deal 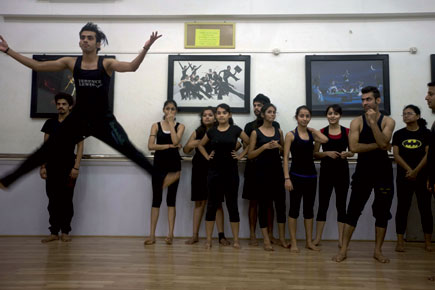 
Twenty people are in queue on the first floor of a building at the far end of an industrial estate in Mumbai. It is a dance studio, with large mirrors on one side and framed pictures of the proprietor, choreographer-dancer Terence Lewis, on the other. At the end of the room lie two black-and-grey mattresses. The mission assigned to the 20 is acrobatic:

one by one, they must run to the other side, flip their bodies in the air, and land on the mattresses either on their feet or backs. Though they are egged on by a loud rap song with incomprehensible lyrics, few get it right. Most fall and hit their heads, some just dive into the mattresses, and one dancer displays such enthusiasm that when he lands, he finds himself at the next room’s doorstep.

“No, no, no,” a lean man shouts, breaking up the proceedings, “This is not how you do it.” His hair is unruly and unwashed, which makes him look like a Neanderthal, with strands of copper on the side. He turns out to be the instructor. He kicks aside the mattresses, runs and completes a double-flip in the air, landing on his feet. Without turning around, he says, “How will any of you ever make it?”

The chastised students queue up for another go. They are under training at Terence Lewis Academy, having opted for a course aimed at helping them appear on dance shows that form a popular genre of reality TV. Unlike Lewis’ other class, a diploma offered at the end of a year-and-a-half long pursuit of dance, this one, titled ‘Dance Pe Lo Chance’, churns out reality-ready students in just three months of training. It has an exhausting schedule of five hour-long classes every weekday, with few breaks inbetween.

Francis Gowda, a sales and marketing manager at the academy, describes the course as “a crash course into TV. If you have the talent, this will get you on it”. The crash course is designed to cram various dance forms—with emphasis on the aerobics and gymnastics-based ones that TV shows prefer—into a series of intensive classes. A nutritionist suggests that participants lose weight, and prepares charts for each student that demand dietary changes. Lewis himself takes a few classes on contemporary dance and offers tips on grooming and personality development. And at the end of the course, students perform pieces they intend using for auditions, and Lewis serves them his feedback.

Lewis started the course this April in response to all the talented dancers he saw who wanted to be better prepared for reality TV auditions. Many of them, he says, are from smaller towns and cities and don’t have the luxury of undertaking a long dance course in Mumbai. “They learn and they audition,” says Lewis, “If selected, great. Otherwise, they return home.” From April to June, the academy trained two groups—37 students in all. Since July, it has had three groups with a total of 60 students.

When they break for a few minutes, a young woman in a black T-shirt named Komal Gandhi explains why she enrolled for the course. “I have auditioned for TV shows and commercials, but no one’s ever taken me in,” she says, “Once I almost managed an ad where I would have been beside Shah Rukh [Khan]. But I was told I needed an artiste card. But I have a feeling dancing will get me on TV.”

Gandhi moves her hands vigorously to express her confidence in this route to telefame. Her eyes are grey, perhaps because she has contact lenses on. For the last two months, ever since she signed up, she has lived on no more than three hours of sleep on weekdays. She works all night at a call centre in Dahisar, a suburb of Mumbai, catches a few winks in the morning, and reports for dance classes in the afternoon. “Sometimes when I’m exceptionally tired, I don’t feel like coming for dance. But then I ask myself, ‘Who am I? A nobody’,” she says. “But if I work hard, I can do it. I know.”

Lewis’s Academy is one of many across the country that are training TV aspirants to audition for reality shows. There are large music institutes like Tansen Sangeet Mahavidyalaya, which have centres in various parts of urban India and boast of star students who have won reality show prizes. Then there are smaller institutes like Divya Music Centre in Delhi, which runs three-month-long classes for those who want to audition for music and dance-based shows. This training school concentrates its module on just three songs and dances for each student; its logic is that focused performances get students ahead in competitions. Many institutes act as finishing schools of another kind, coaching students on how to speak in front of a camera. Another Mumbai set-up called Mumbai Film Academy, which offers music courses, even records the performances of its students so that they can play it back and analyse their progress.

Ranjan runs Indian Television Academy, a glass-fronted TV and film school in Goregaon. Here, the receptionist sits under a metallic grey chandelier, and the walls are lined with posters of film classics like Mother India and The Good, The Bad and The Ugly. Students are taught the nuances of acting, singing, dancing and personality development, and classes are conducted by familiar names like Yukta Mookhey, Mahima Chaudhary and Alka Yagnik.

On a softboard on the wall adjacent to the reception desk are three different news clippings on how Rajan Shahi, a director impressed with the academy’s turnout of talent, intends to cast its students on his TV shows. Shahi is also a member of the academy’s advisory board and the news has appeared in supplements infamous for paid-for items.

Although the academy’s classes do not pointedly cater to aspiring reality TV contestants, it’s a fair guess that most students have exactly that in mind. Rizwan Pandey, a student of one of its main courses, has already participated in two singing contests so far, Indian Idol and Sa Re Ga Ma Pa, and gotten past two rounds on both shows, though eliminated before he could make it to the televised round.

Pandey has a quiet confidence in his voice, not unlike many others preparing for such shows. “I need a little luck to get through the early rounds,” he says, “If I reach the final 10, I can win.” His father had forced him to enroll himself for an MBA programme at an institute in Vishakhapatnam, classes for which were three months away, so he agreed to attend B-school on the condition that his father paid Rs 75,000 for this music course in Mumbai in the interim. One of the reasons Pandey is so driven, he claims, is that he had auditioned for Indian Idol along with a contestant called Prashant Tamang who eventually won the honour. “We were together in queue. He was good, but not great,” he says, “With a little luck, I could have been in his place.” He assesses the finer aspects of his talent with ease. “The teachers here say I have a commercial voice. Also, I am more aware of which songs suit my voice now. I’m better than these other [contenders] anyway,” he says, pointing and smiling at a girl sitting beside him.

The girl, Anupama Chauhan, is here from Muzaffarpur in Bihar. In conversation, the only time her fingers stop fiddling with her cellphone is when she is asked her age. The question prompts both hands to cover her mouth, as if an answer must be withheld at all cost.

While Pandey will soon move to Vishakhapatnam for his MBA classes, she will stick around and try to find a job before talent show auditions start.

Outside the Indian Television Academy, a manager is on the phone speaking with a prospective student. “We are a quality institute with the best of faculty,” he says, as though reading aloud a brochure. “A four-month acting course costs Rs 175,000, but we will waive off Rs 25,000 as a discount if you join immediately.”

Nishchal Sharma and Priyesh Shrimal, both in their early twenties, are young TV aspirants from Indore. They forged a friendship while studying dance under the same instructor back home. Three years ago, their instructor Kunwar Amar was a finalist on Dance India Dance. Since then, the two friends have been keen to win the same show. To raise money, they began by working as dance instructors in Indore themselves, and moved to Mumbai last December to train under an instructor they hope will see their ambitions through. Their savings weren’t enough, so they took loans from family and friends. Both expect to finish their course at Terence Lewis Academy later this month.

“Our parents think we are crazy to do this,” says Shrimal, “To leave everything behind, education and family, to try our luck in something as flimsy as a TV show.” The two have also been taking up odd jobs to support their dream. Both work as assistant choreographers on dance shows like Nach Baliye and Jhalak Dikhla Ja. Shrimal has also landed small acting parts in TV shows like Gumrah and Dil Dosti Dance.

To raise their odds of success, they plan a trip to Kolkata for the auditions of Dance India Dance. “We are auditioning there for strategic reasons,” says Sharma. The competition in Kolkata, they reason, is not as stiff as in Mumbai. What happens if they don’t qualify? “We will keep trying,” says Shrimal, “If we qualify and get fame, even if we don’t win too many rounds, we will move back home and open dance schools of our own.”

As the 20 body twirlers at the academy break for lunch, they disperse. Gandhi sits on a stairway with a vacant look. All she has for lunch is a single apple. Another girl, Nandini Gamre, sitting nearby, is eating a meal of two biscuits. She is only 19 years old and has a plump jowl. Also a resident of Indore, she quit her education to prepare for reality TV shows. She giggles, saying she cannot do acrobatic dance routines. Asked what she will do if she fails to get a break as a reality dancer on television, she frowns and refuses to talk anymore.