Singing along with Tori Amos

Tori Amos may be the favourite of the intellectual college-going lass, but her latest album shows she's a force to be reckoned with 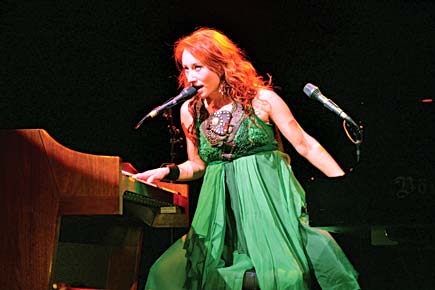 Tori Amos may be the favourite of the intellectual college-going lass, but her latest album shows she’s a force to be reckoned with


Usually found on the playlist of a 17-year-old wannabe intellectual college-going lass, Tori Amos is known for her dense lyrics. But musically, even someone who’s heard only Celine Dion will appreciate her at first listen. Her latest album, the beautifully-named Abnormally Attracted to Sin (Price $12.99 at amazon.com), is a perfect example of both these quirks.

From the opening track Give, she launches a subversive attack on her religious upbringing. ‘There are some who give blood/ I give love’ might sound vague, but it raises a philosophical question about sacrificial love. And ‘welcome to England’ where you’d ‘better bring your own sun’ sounds typical Tori Amos and is actually funny.

This album is a simple mix of songs; no concept or story is being told here. So, the song selection seems spread out a little too thin. But she makes up for this with the stellar number Maybe California, a heart-wrenching dialogue between two mothers who’re about to jump to death from two cliffs.
So far so good, but in Mary Jane, Amos probably busts all concepts of metre and rhyme with lyrics like ‘Dr Tetrahydrocannabinol Pure Isomer Dronabinol’. But this line is the only aberration on this album.

Amos treads virgin territory in Lady in Blue, a jazz-fueled slow romp which gets better towards the end. Wish there were more such numbers on the list.

This is an abnormally attractive album. Highly recommended.