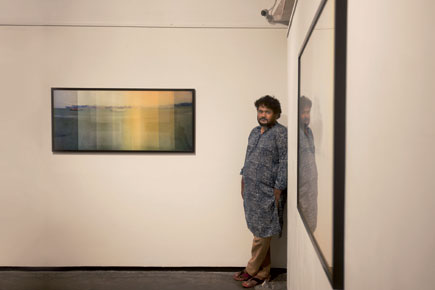 The monstrous presence of the decaying, dying ships on the shores of Chittagong in Bangladesh appear in sharp contrast to the people working there who seem like Lilliputians in front of the vessels. Still, somehow, both beautifully and poignantly merge in some of the photographic artworks exhibited as part of Bangladeshi multidisciplinary visual artist Shumon Ahmed’s solo show, ‘When Dead Ships Travel’.

For the past few years, Ahmed’s name has been mentioned enthusiastically in almost all conversations about the contemporary art scene in Bangladesh. The artist was in Mumbai for the opening of the show at Project 88, a 4,000 sq ft gallery in a space that used to be a century-old metal printing press in Colaba. Our conversation starts with the current show, but slowly meanders through other fascinating aspects of Ahmed’s work and life.

‘When Dead Ships Travel’ is the second chapter of Ahmed’s earlier work ‘Metal Graves’, based on the ship breaking yards of Chittagong, where disused ships are taken apart for their steel. In 2006, Ahmed accompanied the Swedish photographer Jan Gruvborg to the city. Even though he himself wasn’t really supposed to shoot there, he had a hunch about the place, so he took some shots with his “cheap plastic camera”. He only developed the roll in 2011, though. “When I finally did develop it, something really drew me to [the images], so I started working on it,” says Ahmed.

In 2014, ‘Metal Graves’ was exhibited properly for the first time at the biannual Dhaka Art Summit in a show called B-desh curated by French curator Deepak Anand, where it scooped many accolades. Artist and curator Jitish Kallat then brought the show to the Kochi-Muziris Biennale in India last year. And when Project 88 approached Ahmed for a solo show, he decided to go back to Chittagong. That is how ‘When Dead Ships Travel’ became an extension of ‘Metal Graves’.

It is hard not to see Ahmed’s exhibition as a strong statement against the cost of globalisation and consumerism. However, he says that while the artworks do indeed reflect the effects of globalisation, that’s just accidental and simply the viewers’ take. “When I went there, I didn’t go with any particular intention of making a political statement. I was simply drawn to the enormity of the catastrophe and the scale of these gigantic ships, as opposed to my own scale and existence. It was fascinating to measure the two—organic and inorganic. The general atmosphere was melancholic. The stillness was poetic. These ships were standing still, ripped apart, rusting. That gave me a very chilling feeling about the journey of life itself. Ships became a metaphor of the idea of my life going through time, which will eventually be dismantled with death,” he says. The new Polaroid prints he took in 2015 have no people, and focus solely on the remains of obsolete ships.

The idea of questioning the self is palpably evident in a lot of other work by Ahmed, including the photo series ‘I’ where he turned the camera on himself, and his video project ‘Put Myself Back Together Again’, which includes a time- lapse clip where Ahmed is seen trying to solve a Rubik’s Cube even as life goes on all around him. In another video, his face is being ‘stamped’ with assorted provocative identities by viewers— Muslim, Jewish, Hindu, Awami League, Civil Society and suchlike. “We all have that desire to establish our identity. This could be in terms of what we do, what we build, what we destroy. This is part of many of my works. My works are confessions, a personal journey for me.”

Born in Dhaka in 1976, a major part of Ahmed’s personal journey involves his delicate relationship with his mother. His mother has a mild mental disability caused by an iodine deficiency that went undiagnosed for many years and for which she was often termed ‘mad’ by people around her. “The story of my mother has been building up all my life. The things I saw done to my mother, and even the way I behaved with her, often making her feel sad, unwanted and fragile— all of that has been rooted deep in myself. I was never really able to share it with anyone including my father. And there came a point when it became too heavy, and I wanted to lay it off in some way.”

Ahmed started channelling his suppressed emotions into his work. His main intention was to give a voice to his mother that no one allowed her. “I have taken the letters she wrote me while I was studying abroad as a teenager as my core inspiration. When I went back to those letters, I found parts of her speech very appealing, very strong. Since then, I have tried to translate it in my work, in sounds, in a book, in various images and in an installation. It’s an ongoing work and I have many interesting ideas based on this including using her handwriting as part of an artwork.” He is also engaged in recording his phone conversations with his mother about her childhood which he wants to turn into a biography.

Many of the earlier influences of his mother have stayed with him. Watching Satyajit Ray’s Apu trilogy together, for example. Art in various forms would evoke his curiosity. “I would see my cousins learning art at home, which I wasn’t allowed to. My aunt is a famous writer in Bangladesh. My uncle had a professional camera and my cousin would come from London with the latest Polaroid. All those memories influenced me.” Growing up in Dhaka has given him many interesting stories. He seems especially fond of Old Dhaka. “While growing up, I would often look up at the façades in Old Dhaka and romanticise them.” Even now, he often goes there to see things, like the work of rickshaw painters. He once collected works from a box camera artist Safder in Old Dhaka and curated a show on it.

Ahmed’s own early leanings were towards the written word. He was, and still is, hugely inspired by the poetry of Pablo Neruda and Rumi. He even published a book and a poetry magazine with a few of his friends. It was in the mid-1990s that he saw the work of an eminent Bangladeshi portrait photographer, Nasir Ali Mamun, and found himself inspired. “There was a saying among the young poets those days that whoever got to sit with Nasir Ali Mamun for a portrait session has finally made it as a poet. When I didn’t get his attention, I decided to take my own portrait for my poetry book. When I failed at this miserably, I took up a basic course in photography at the then Bangladesh Photographic Society in Dhaka.”

After unsuccessfully trying to do a business course in Australia and working at an ad agency in Dhaka, Ahmed realised that photography was his true calling. He then joined Pathshala, an institute for photography in the country’s capital. He soon found his way to The Danish School of Media and Journalism in Denmark through a scholarship. The style of photography he encountered here was quite different from what he was familiar with back home. Photographers would use all sorts of experimental and imperfect images in their work. Pathshala had been about reportage and documentation. And so his work became an amalgamation of both, though not quite. “I work quite organically,” he muses, “I couldn’t become institutional. I was always an outsider. I learnt the teachings, but always relied on my own consciousness, instincts and understandings.”

Ahmed is not really an outsider anymore. Times are changing in Bangladesh and it is a great time to be an artist there. A lot of credit for this goes to the Dhaka Art Summit. While Dhaka always had a wonderful art and photography scene, it wasn’t until 2012 when its first edition took place that the country’s art scene achieved global prominence.

“There were many contemporary artists who didn’t come from a photography school but were exploring photography in their own way, but everyone was isolated. What Dhaka Art Summit did was to give a platform for everyone to come in and have a dialogue with each other. That proved to be very effective. Today, Dhaka Art Summit has created a platform for Bangladeshi artists to go beyond boundaries, and now we have arrived at an international scene. That’s a huge leap forward,” he says with a lot of pride.

Apart from his visual artwork, Ahmed also does social documentation work for a few NGOs in Bangladesh and a few journalistic assignments for some publications. He is quick to disassociate them from his work, however, referring to them as “client requests”. However, one association that he is attached to is visual documentation for the Centre for Disability in Development in Dhaka, with which he started working in 2006. This is where, he says, he learnt more about his mother’s disability.

He is currently working on, ‘Unsuspending Disbelief’, a group show which will be held at Logan Center Gallery in Chicago in January 2016. It will feature works of 11 contemporary international artists. Soon after, the third edition of Dhaka Art Summit will kick off in February. This time Ahmed will present an interactive, multimedia solo show, ‘Land of the Free’. The exhibition will be an extension of a project that he did earlier on Mubarak Hussain bin Abul Hashem who happens to be the only known Bangladeshi prisoner who returned (in 2006) from America’s infamous prison at Guantánamo Bay, Cuba.

While talking about ‘Land of the Free’, the conversation moves to art for art’s sake versus art for social change. Ahmed has a strong view on this. “I am wary when people say art is for change. Of course, art is very important for society. It gives you a sort of entertainment, a breathing space. It nurtures you in many ways. But to say that any art is directed at social change is hypocrisy. Viewers take different things from a piece of art, depending on who they are. They might get inspired to do something, but it’s their view. My work is open and a viewer can take what he or she wants out of it.”