Three films in Sanskrit will soon be released in India. Can they help revive the ancient language? 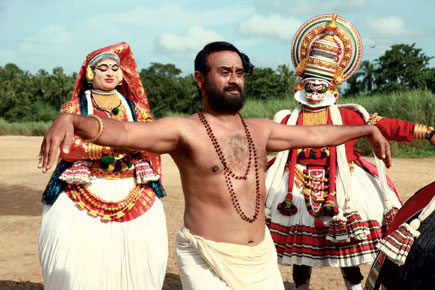 When Arshia Sattar, noted for her English translations of Valmiki’s Ramayana and the Kathasaritsagara, was studying Sanskrit in the US, she remembers watching GV Iyer’s Adi Shankaracharya (1983)—India’s first Sanskrit feature film—as a ‘language exercise’. The movie outing was hardly meant to generate a can’t-wait-to- watch kind of excitement . She and her peers spent most of their time exchanging notes on possible translations of what was being said onscreen. Today, after a hiatus of more than a decade, there are three new Sanskrit films lined up for release in the course of the next year. Will they go beyond a niche audience and help create a well-defined genre of modern Sanskrit cinema in the future? Sattar is sceptical. ‘As for the ‘future’ of Sanskrit films, I can’t see it as terribly bright. Unless in the next few years we are persuaded that Sanskrit is the only language we should be speaking,’ she says over email.

Vinod Mankara, an award-winning filmmaker and writer from Kerala, is more hopeful. He was first exposed to the refined elegance of Sanskrit as a child when he would visit temples in his hometown to watch elaborate Kathakali performances with his grandparents. He was besotted with the richly detailed spectacle of this classical dance-drama rendered in chaste Sanskrit. One particular play stayed with him. What Mankara really liked about Nalacharitham was how the play dealt with flesh-and- blood human figures rather than the gods, goddesses and demons in all the other Kathakali performances he had seen. He later studied the play in college and went on to make a critically-acclaimed documentary on it titled Nalacharitham Anchaam Divasam, which won the Kerala Kalamandalam Award. Today, after five years of working on the script, Mankara is ready to release Priyamanasam, a film that chronicles the agony and ecstasy of the 17th century romantic poet- scholar Unnayi Warrier while he was engaged in the creation of his masterpiece Nalacharitham Athakatha

Once, while filming Priyamanasam, Mankara called some of his crew members to the studio to see snippets of his Sanskrit film. He wanted to gauge their response. He was relieved to find that they understood everything that was going on in the scene, in spite of not knowing the least bit of Sanskrit. That’s when Mankara knew he was on the right track. “I have used Kathakali as the subject of this film. And Kathakali is very colourful and so is my treatment of the subject. The colourful scenes and the acting will aid the comprehension of the language. Also, in the last two Sanskrit movies, the language was used in a very rigid manner. In Priyamanasam, I have used Sanskrit dialogues in a very talkative way, like you would talk in Malayalam or Hindi,” he says, explaining his departure in style from that of the Kannada filmmaker GV Iyer. Interestingly Mankara’s Priyamanasam (‘sweetheart’ in Sanskrit) is fully composed in the ancient language from start to finish, including the credits and names on posters, in a bid to make Sanskrit its real hero.

In the film, when Warrier is seen in the act of writing Nalacharitham in the palace of Travancore—as the king and the queen anxiously await the final draft—the poet swings between acute spasms of hallucination and reality. The characters of his play come alive in his mind. These illusory characters talk and argue with the writer and are cleverly juxtaposed with the appearance of the three female lovers who had influenced the poet’s past. This chimeric intermingling of the past, present and future in the poet’s mind is emblematic of a creative churn common to many, and can be transposed to writers and artists of any age. This aspect of the period drama, Mankara feels, will resonate with a modern audience. Due to release in the first week of September, Priyamanasam will be the third Sanskrit language film in the history of Indian cinema. “Marketing the movie will be a big challenge. I am planning to release it in five to ten cinema halls in many cities in India. But most importantly, I will release it abroad as many universities there are eagerly awaiting the release of the film, especially Germany,” says Mankara who has made more than 600 documentaries so far, including one on the painter Raja Ravi Varma.

While a number of measures have been taken by the current Modi government to foreground the rich contributions of Sanskrit—that ‘repository of wit and wisdom of all the Indian peoples throughout the ages’, the attempt to popularise it as a spoken language is clearly assuming a life of its own. That so many filmmakers should make full- length feature films in the language is perhaps the most credible sign of this. The ‘show, don’t tell’ essence of the visual medium may eventually prove far more useful in giving the language a modern-day lease of life.

When Bangalore-based Ravishankar V, a 43-year-old techie, attended a 10-day workshop on Sanskrit at Infosys, he was greatly disturbed to learn how Indians feel so ‘apologetic’ about an important part of their own cultural heritage, and how they wait for foreigners to expound the virtues of Sanskrit to realise its merit. “The more I learnt about the language, the more I saw how a lot of people who have reached great heights in science, like Einstein, have appreciated the thoughts that are there in Eastern philosophy,” he says, “So I wanted to do something for this great language for the next generation.” As a passionate writer of children’s books, he had a story to tell. And the workshop inspired him to meld his storytelling and multimedia skills with his newfound love of Sanskrit into a Sanskrit film.

If all goes by plan, next August will see Ravishankar release Punyakoti, the country’s first crowd-funded and crowd-sourced Sanskrit animation feature film. Set to tune by the acclaimed music maestro Ilaiyaraaja himself, the film’s story is derived from the Padma Purana, a Sanskrit text about a beautiful cow called Punyakoti who is an epitome of honesty and truth. In Karnataka, the Kannada version of this story is more popular as a folk song called Govina haadu and is set in the fictional village of Karunaadu. Ravishankar uses the premise of this song to weave another story on man- animal conflict, when Karunaadu is beset with a drought, to show how the ideals of the truthful cow are relevant under the circumstances.

“This project is a big experiment in Indian cinema itself,” says Ravishankar, “The pre-production of the movie has been done in a crowd- sourced manner for the first time ever in the country.” Several studios and animators have collaborated to produce the varied scenes in the film, he elaborates, but to ensure some method to the madness, every shot has been pre-written and there exists a strict style sheet. “One animator is in Brazil. He is Portuguese. All I know is that he loves Sanskrit and is trained in animation. In fact, I have not even seen some of my team members,” says the filmmaker, who hopes to garner his estimated budget of Rs 40 lakh via Wishberry, a crowd-funding website.

Ravishankar even got his dialogues simplified by Samskrita Bharati, India’s premier institution involved in promoting spoken Sanskrit the world over. Yet, not everyone is convinced that celluloid ventures in the language will find large enough audiences. National Award-winning film critic MK Raghavendra has his reservations, especially since Sanskrit does not lend itself easily to the exploration of unconventional subjects. “Sanskrit takes too much effort to learn, its vocabulary has not been expanded to include contemporary experience and this means that films in Sanskrit will have to use English terms like pizza, mobile phone, AK 47,” says Raghavendra. “Most importantly, we can’t have bad words in Sanskrit. Since cinema is getting more violent and is dealing with crime increasingly, with people constantly swearing, how will Sanskrit accommodate that? How is a gangster going to curse his enemies in Sanskrit?” He believes that Indian audiences may at the most enjoy bits of Sanskrit in a Hindi film: “Say, a film about a peace- loving Sanskrit scholar who is made angry by ruffians and becomes tough.”

Chamu Krishna Shastry, who pioneered the ‘Speak Sanskrit Movement’ through his NGO Samskrita Bharati, counters that view: “As far as vocabulary is concerned , no other language in the world has the kind of word-generating power that Sanskrit has. When a language is used on a daily basis, words automatically come into existence. Current developments can be easily updated in Sanskrit if it is used daily.” Ask Shastry if Sanskrit is really being used beyond academic seminars and conferences, and he confidently reels off a set of numbers. “During the last 34 years,” he says, “Samskrita Bharati has taught more than 10 million people to speak Sanskrit and trained more than 100,000 teachers. Lakhs of people have started using Sanskrit as a medium of communication. Today it is widely used in homes, schools and private conversations.”

Another filmmaker trying to revive Sanskrit on celluloid is the well known Kannada filmmaker KSL Swamy, better known as Ravi. Titled Prabhodha Chandrodayam (‘Rise of the Moon of Intellect’), his film based is based on an 11th century play by Krishna Mishra Yati and is being funded by the Central and Karnataka governments along with some religious mathas. Interestingly, Ravi worked as assistant director to GV Iyer for 30 years, which may explain his own attempt to release a film in Sanskrit. But his film will also have a smattering of Malayalam and other local languages, as Ravi noted in a recent article: ‘Could people like bhajiwalas talk in Sanskrit? At no point in our history did the entire population speak the language.’

Professor Ramesh C Bhardwaj, head of the Sanskrit Department at Delhi University, is clear about the value of the language. “Without Sanskrit, there is no way you can understand anything about Indian culture. The language carries the entire spectrum of the Indian intellectual system,” he says. “The question is not about how many people are speaking Sanskrit, which is hardly more than 1 per cent anyway. So many great Sanskrit scholars I know can hardly speak the language. It is about understanding the root of our culture, to highlight the illustrious tradition of our intellectual thought. Perhaps, this is what these movies are trying to do.”