Salman Khan has a Cold

He’s moody. He ditches. He can destroy careers. So what is it about Salman Khan that makes him so endearing? 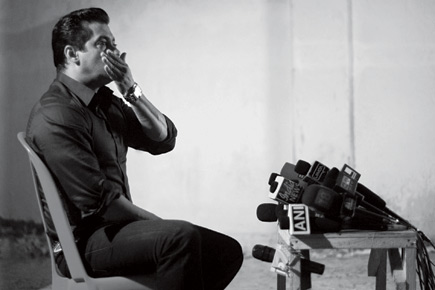 He’s moody. He ditches. He can destroy careers. So what is it about Salman Khan that makes him so endearing?


Expect the unexpected. One Monday in Mumbai, a few hours before our scheduled interview, a call comes in. Salman Khan can’t get out of bed today—he’s struggling with a cold. You’ve been in the business long enough to sense that this probably means Salman doesn’t feel like showing up for media interactions, even though his brother Arbaaz Khan’s production Dabangg is just two weeks away.

Turns out, you’re wrong; the 44-year-old superstar does have the sneezes. On that rainy Friday, Salman Khan arrives at Mehboob Studios, eyes red and heavy but looking spiffy in a coffee-coloured shirt and tight jeans. A lanky fellow, part of the superstar’s faithful entourage, shakes out a starched handkerchief quickly and hands it out so there isn’t a break in our conversation. He needn’t worry. Today, the answers come from far away, under siege from an attack of the sinuses.

Interviews with Salman over seven years have turned several shades—shy, cocky, funny, strange, monosyllabic, sarcastic, guarded, frank, affable and oddly sweet. Today, there’s a confident air. The buzz around Dabangg has grown like a monster. “It’s never happened like this before,” says Salman, in a low drawl, almost lazily, “I’m fascinated by the response to just the trailer.”

In the Abhinav Kashyap-directed Dabangg, Salman plays cop Chulbul Pandey, a character who serves justice cold, his punches coming fast and loose. “If (Quentin) Tarantino were to make a film in India, it would be like this,” says Abhinav’s brother and avant garde director Anurag Kashyap. Salman shrugs and says that he hasn’t seen any of Anurag’s films and it’s a coincidence he’s working with his younger brother. “I think I made Salman a bit nervous,” laughs Anurag, “Years ago, I was supposed to direct Tere Naam and I told him that I wanted him to grow chest and armpit hair as that was how men in Mathura looked. I didn’t even know when I was replaced with another director.”

Abhinav has had better luck. An old college buddy of Arbaaz Khan, Abhinav had Salman at first narration for Dabangg. “I had a gut feeling that it was an amazing character. It had all the shades,” says Salman about Chulbul Pandey, “He’s angry, a comedian, a romantic and it’s all well woven together. He’s difficult, yet lovable. People want to be him. You laugh with him, you feel good when he’s angry and when he takes bribes, it doesn’t matter.” Why? Is it actually well intentioned? Salman makes a wide gesture with his hands and shakes his head. “No, he just does it. Apni marzi.”

The superstar could just be talking about himself. After 22 years in the film industry where he’s got by with little acting and lots of attitude, audiences still love Salman Khan. He likes doing movies that even your grandparents can watch without squirming, which is why he won’t kiss onscreen. Salman has easily moved from romantic, comic roles to action in Wanted and Dabangg, but despite his real-life bad boy brawling and court cases, he will never play a villain because he doesn’t “feel like it”. Yet, “I have no image,” Salman says.

It’s a fact. Yuvvraaj, London Dreams, Main Aur Mrs Khanna and Veer are all in recent public memory, and yet Salman is very much part of Bollywood’s trinity of Khans. “I have no idea what the connect is with audiences… it could be a million things.” At this point, the star is tenderly stroking a self-invited cat under our table. “You may meet someone and hate them in an instant or be fond of them for the longest time and hate them the next minute. There’s no hard or fast rule why you take to someone.”

This rings true in Salman’s case. On my first interview with him in 2003 to publicise Tere Naam, we met on the sets of Garv, seated again outside his van. A journalist ahead of me was thrown out when the questions got uncomfortable, then summoned back to finish his interview. The publicist laughed and said that maybe I needed a helmet going in next, in case Salman lost his cool. During my session, he thawed a bit at the soft opening question. On our second question, there was a sudden downpour. “Quick, get in the van!” Salman said. I looked for my handbag; it had disappeared. Salman had picked it up and run inside.

Once in, the star was both loquacious and shy. He pointed out his broken bones, spoke of how he was too old to try out the cycle acrobatics he’d performed in Maine Pyaar Kiya, and of how he loved walking his dogs. Asked about the speculation that Tere Naam drew inspiration from his own stormy relationship with Aishwarya Rai, he calmly replied that it was a remake of Tamil movie Sethu.

This week in 2010 has been tumultuous again in his love life. Television news channels have played up bites of Salman stating he’s single, and there have been stories that Katrina Kaif burst into tears when badgered for a clarification. There is little sign of emotional upheaval on Salman’s face. From Dabangg, he says he’s already moved onto shooting the Anees Bazmi comedy Ready, and is committed to doing producer and friend Sajid Nadiadwala’s film directed by Shirish Kunder. Over 22 years, Salman has worked with many first-time directors, from Sooraj Barjatya, Sanjay Leela Bhansali and Karan Johar to Abhinav Kashyap now. “They come up with different scripts and cooler films.” Does he ever interfere with their vision? “Obviously, if they’re going wrong, I tell them. I’d be a fool not to. You don’t put namak (salt) where you’re supposed to put sugar,” he says, and then adds abruptly, “Have you eaten lunch?”

It’s 4 pm and a large steel tiffin has been laid out. Salman carries on with the interview, repeatedly asking you to tuck in, between mouthfuls.

Halfway through, the cold takes over, he breaks into a sweat and sighs wearily once the table is cleared. The huddled TV news reporters have now waited three hours for soundbites. He strides onto the studio floor and asks, “How long will this take?” Fifteen minutes, they shout in unison. He grimaces. His session with them is perfunctory. “What a jerk,” mutters one journalist under his breath. Salman doesn’t care. Has his exchange with the media changed all these years? “No, it’s the same. You fill your pages, I publicise my film.” A stint as host on Bigg Boss will follow next month and Salman is unperturbed by the fact that he’d have to deal with celebrities who make fools of themselves. “I like the idea that celebrities go inside the house and become real people,” he says.

On Twitter, an unusual sense of humour often slips through his tweets. The star has more than 365,000 fans and follows only Dabangg co-star Sonakshi Sinha and his siblings Arbaaz and Arpita Khan. “I didn’t get onto Twitter for publicity,” he says. “I wanted to connect with people and I try to reply to most of them. There are lots of idiots who would never say a word to you if they ever met you, but come up with nasty stuff hiding behind the Twitter curtain. I don’t block them.”

Somewhere in the distant future, Salman knows he wants to direct a film, but for now he’s enjoying working as an actor. When the marriage question comes up, he talks in circles. “Marriage is like settling down. Yes, I think I will change when it happens, but I don’t know how until it does,” he says.

Salman then asks, “What do you want to know?” What’s going on in your head, I reply. “Even I don’t know what my state of mind is like,” he says smiling, rocking his chair back and forth.