Actor, director, social activist... Aparna Sen’s seventh film as director, The Japanese Wife, releases next Friday. She speaks on her new film and how her frustration with mainstream cinema led her to make her own movies. 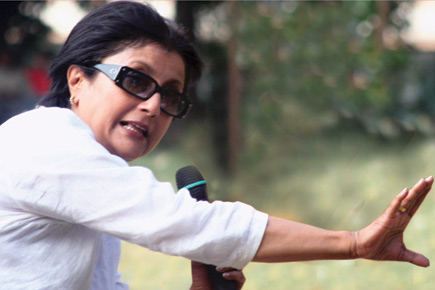 Aparna Sen on her new film and how her frustration with mainstream cinema led her to make her own movies.


The first Bengali film Aparna Sen watched was Pather Panchali. It was made by her father’s close friend, Satyajit Ray, who ended up directing her as a 16-year-old in her first film, Teen Kanya.

Today, 64-year-old Aparna tells her own stories, in Bengali and English, rich with the sensibilities she imbibed as the daughter of renowned film critic Chidananda Dasgupta. Sometimes, they are about a lonely schoolteacher, or a woman taking care of her schizophrenic sister, or even a divorced woman’s relationship with her former mother-in-law. Other times, they tell unusual love stories, like her latest, The Japanese Wife, that opens in cinemas on 9 April, where a schoolteacher in the Sunderbans and a woman in Japan stay married for 17 years without ever meeting.

Aparna has acted in more than 50 movies. She was one of India’s first women directors and has won the National Award thrice. She has single-handedly raised two daughters, Kamalini and actress Konkana Sen Sharma. Yet, Aparna looks back with regret, wishing she could have told many more stories than just seven in the last 28 years. Excerpts from an interview:

Q You’ve always liked to write your own stories. Why did you choose to make a film on Kunal Basu’s short story The Japanese Wife?

A It was the whole absurdity of the premise that I found utterly charming. I was completely disarmed by it. How can two people be married for 17 years without ever meeting? They’re like two babes in the wood (laughs). The innocence is mindboggling.

Q How have your inspirations changed since you made 36 Chowringhee Lane in 1981?

A It’s the subject that dictates my instincts. In this case, I wanted to make a film that would remind you of Japanese watercolour. In Japanese paintings, you have these minimalistic lines—just one line expresses a lot. I love that kind of economy. I dislike saying too much (pauses); you must have seen that in most of my films. In Mr And Mrs Iyer, when the old man is killed, there is scope for a lot of violence, but all I showed are his dentures. Maybe that’s a woman’s way of looking at these things. People have asked me, what is this feminine gaze? Maybe it’s this. Lots of men make movies that ostensibly speak against violence, but in the manner that they depict it, you can discern a little boy’s relish for violence. Men remain little boys for a long time. There is this absolute love for blood and gore that comes through (laughs).

Q You are now in your third marriage. How do you view love today?

A At my age, love is a lot about companionship, mutual respect and continuing interest in your partner’s work. Romantic love lasts for a very short time. Yet, I’m an incorrigible romantic and all my films have that element in them.

Q What do you feel about Konkana’s recent films?

A Well, she’s an intelligent girl. You can’t have a career without doing mainstream. But if mainstream actors want a lasting life, you have to do roles outside of it. Then you’re given respect. You have to do films that stand the test of time. Konkana does that. She’s like Shabana (Azmi).

Q How do you view the ‘fart’ humour in Atithi Tum Kab Jaoge?

A I haven’t seen Atithi, so I can’t comment on that. But farting has been used by [Federico] Fellini in a beautiful way. It’s not bad per se. If you’ve seen Fellini’s Amarcord, which is about his life as a boy, all kinds of strange things happen. One of his uncles shows him how many times he can fart (laughs). It’s very funny. It’s bawdy without being vulgar. It’s healthy, little boy humour.

Q What do you feel when you look back and see that you have made just seven films in 28 years?

A Regret (pauses and laughs). Regret. I wish I could have made many more films. I got a lot of offers after 36 Chowringhee Lane, but I took my time. I hadn’t started thinking of myself as a filmmaker after 36 Chowringhee Lane. I felt I’d made one film, that didn’t mean I had to make another one. With Paroma, I found a subject for my second film. After it, I was hailed as a feminist messiah. If I had stuck to feminist subjects, I would have got funding more easily, especially from abroad. But I’m not the kind of person who likes to fall into a slot. If I had known that filmmaking was going to be my all-consuming passion, I would have made more films. It’s also rather difficult for a woman. Not because people don’t take you seriously, but because my kind of films don’t get funding. I had been in mainstream cinema for a long time as an actor and it was because I couldn’t take it anymore that I began making my own films.

Secondly, I was bringing up two daughters single-handedly since I was divorced. I acted in a lot of plays at the time to keep the home fires burning. Those were creatively wasted years. Being a woman and not having a wife to take care of the home was tough. I still remember during Paroma, I was trying to feed little Konkana and telling my assistant that I wanted my next shot to be a trolley shot.

Q Your next film, Iti Mrinalini, is about an actress looking back on her life, with Konkana playing the younger you. How autobiographical is it?

A It’s autobiographical, but not a history of my life. I’ve been through all those experiences of shooting in the mainstream film industry. It’s also about other people in difficult relationships. There’s an autobiographical element in the kind of person she is. She’s a film buff, bit of an intellectual who gets into mainstream cinema. Her love of literature is very like mine.

Q Your father is a film critic. You cut your milk teeth on cinema?

A The first Bengali film I saw was Pather Panchali. Before that, I was allowed to watch the Marx brothers and Chaplin. I remember there was a balcony in the house I grew up in. My parents were founder members of the Calcutta Film Society and there was an 8 mm projector brought in, and members would come. We would sit and watch Russian classics. We cut our teeth on films like Battleship Potemkin and Ivan The Terrible (laughs), The Passion of Joan of Arc and (Ingmar) Bergman’s The Seventh Seal. That’s what we grew up on. So can you imagine after that, when I started acting in mainstream cinema, how I got more and more frustrated?

Mind you, this is not to say that mainstream cinema hasn’t given me anything. It’s given me an identity. When I wanted to make a film and I approached Shashi Kapoor, I could be sure of at least a hearing. There are so many talented filmmakers who don’t even get that. I’m grateful for my identity as an actress.