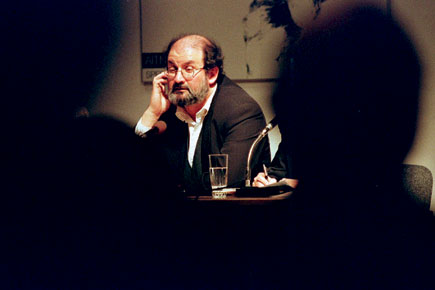 In Joseph Anton, Salman Rushdie alleges that journalist Madhu Jain’s review of The Satanic Verses “lit the fire”. Her response


Salman Rushdie was once a good friend. And, a writer I have long admired. The fatwa Ayatollah Khomeini issued against him on Valentine’s Day in 1989, forcing him to go into hiding and taking on the nom de survival of Joseph Anton, also dealt a blow to our friendship. Salman believes that the magazine India Today and I (obviously, he blames me more) “lit the fire’ as he writes in Joseph Anton.

It all began with my review of The Satanic Verses, published on 15th September 1988 in India Today­ (probably the first review of the novel.) The copy I used was the proof copy Salman had given me in London. I had stopped by his house to say goodbye, where he lived at the time with his second wife, the writer Marianne Wiggins. In fact, my husband and I had attended their wedding in Islington earlier that year.

Just as I was leaving a motorized wheelbarrow came down the little street in front of his home. In it were the proof copies of his new novel. Salman picked one up, wrote some very nice words in it and handed it over to me, with the warmest of smiles. When I returned to Delhi my editor in India Today asked me to write a review before anybody else did. Since the book was yet to be launched, I called Salman in London for permission to publish a review. He said yes. Later after I had read the novel I telephoned him again to ask for a short interview to accompany the book review.

Worried about the reaction of Muslim fundamentalists to some of the passages in the novel, I wished Salman to say that it was not just Islamic fundamentalism but fundamentalism of all kinds that he was against. The Satanic Verses was about so much else. I even reminded him about the evening we had spent with him and wife months earlier discussing the manuscript of the book, during the course of which we had warned him that the greatest threat he faced personally was from the subcontinent. Salman was planning to go to the States to promote his book and was more anxious about the reaction of Black Muslims there. I thought, rather naively in hindsight, that the following excerpt from the interview published with the book review would temper extreme reactions.

“Actually, one of my major themes is religion and fanaticism. I have talked about the Islamic religion because that is what I know the most about. But the ideas about religious faith and the nature of religious experience and also the political implications of religious extremism are applicable with a few variables to just about any religion.”…He also said: “In the beginning and the end of the novel there are many other kinds of fundamentalisms also.”

Unfortunately, the editor of the books pages of the magazine at the time, who later went on to edit a national daily, plucked some of the more volatile extracts from the novel—those about the Prophet’s wives—and inserted them into the book review. Not too long after the IFS bureaucrat-turned-politician Syed Shahabuddin read the excerpts (not the book as he admitted ) and demanded that The Satanic Verses be banned. Protests erupted in India and Pakistan. In Karachi, a few protesters died when they were fired upon. It is believed that Ayatollah Khomeini watched this on television and ordered the fatwa.

The morning when Salman gave me a proof copy of his novel was the last time that I was to meet him. Convinced that I was responsible for his novel not being allowed into India he refused to speak to me.

Well, actually, there is a PS, a rather sad one to this story. A few years ago when Salman was in New Delhi for what was then called the Commonwealth Writers Prize I went up to him to tell him what had happened. He heard me out and then turned his back to me and continued talking to his son Zafar. But before doing so he said: “I don’t even want a memory of this conversation.” Cruel words, exquisite prose.