Raza Returns to Pay a Debt

After staying in France for nearly 60 years, one of the world’s greatest modern artists, Syed Haider Raza, has decided to “spend the rest of my days” in India 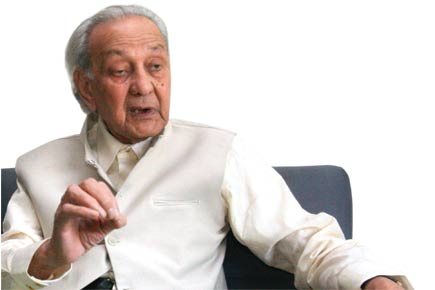 After staying in France for nearly 60 years, one of the world’s greatest modern artists, Syed Haider Raza, has decided to “spend the rest of my days” in India


Lives and works in Paris and Gorbio, France. That’s a standard line, frequently used at the bottom of most of Syed Haider Raza’s profiles published across the world. However, that address is soon to change. For, the 88-year-old master, celebrated in the latter part of his artistic life for the quiet contemplation on cosmology and meditation on Nature in his signature bindus (dots), has decided to come back to Delhi. Like a delirious kid who wants to return home after a long holiday, Raza, who has spent about 60 years—some don’t even live that long—in France, is flying to India on 29 December. To stay on permanently.

“The only thing I’m excited about is to touch down, to feel India… mujhe bas jeeena hai aur jeena hai mere watan mein (I just want to live and live in my country),” says Raza, warm-voiced, over telephone from France. A two-floor apartment, bought in Safdarjung Development Area, Delhi, as part of the Raza Foundation, is where he will live. But that’s the least of Raza’s—who stayed as far as Mumbai’s suburb Kalyan during his struggling years—concern. “I’d be happy to live wherever they put me up,” he chortles, before he coughs and whispers, “Usmein mera kya (How does it matter)? I don’t keep too well these days. I think I’ll be good in Delhi. I’ll continue to work—that’s what I’ve done all my life. For so many years, you know.”

Although Raza had moved to France with fellow artist Akbar Padamsee in the 1950s, he never severed ties with India. Proof of that is his artistic output. Raza often joked with his Parisian pals that though he lives there, his inspiration comes straight from India. Matter-of-factly, he says he knew he’d return to his roots some day. “My attachment with India is too deep for me to forget it, to forget what the country has done for me,” he volunteers. “There’s everything about India that attracts me. The whole sentiment. The culture, which is so unique, the sort you cannot find anywhere. I’m fond of the Hindu dharma (religion), I like the idea of so many religions co-existing… In Europe and America I’ve seen people running after money—money-money-money,” he pronounces with sardonic disgust, and just when you try to slip in a query on his own artworks, which fetch crores at auctions, his voice chokes. “In India, I haven’t seen that. There’s more love, there’s a culture of which I was talking about earlier. That is why I want to spend the rest of my days in my country. I don’t know how many days of that are left.”

If Raza’s departure from the land of his birth was guided by artistic liberation, his return could be attributed to a sense of compulsion. Moreover, he wishes to mobilise talent in art through the Raza Foundation and feels his presence in India would help achieve that. It’s evident that the painter has carried his country in his heart, evoking a deep sense of homesickness to which he has capitulated—and risen— repeatedly. Sometimes with success, sometimes not. “I never gave up on my Indian passport. You know, my siblings crossed over to Pakistan during Partition. I decided I won’t go. I remained an Indian. That’s what I loved the most and I think it was a right decision,” he reflects.

Raza’s decision to return, as his long-standing friend and fellow artist Krishen Khanna points out, could also have arisen out of loneliness. Ever since his wife, Janine Mongillat, passed away in 2002, Raza’s life had been reduced to his home and atelier. It was because of her that he’d stayed on in Paris. Some years later, he adopted a young girl who has been his caretaker for a while now.

“He’s alone. There’s nobody to care for him. At this age of your life, you’d want to be amongst your friends and people, isn’t it? We are very excited to have him here. It’s a great thing that he’s going to stay in Delhi. I feel like those days are back when we’d spend so much time,” says Khanna, referring to the days Raza and he spent during the Bombay Progressive Artists’ Movement—of which Raza, incidentally, was the founding member. Raza too is keen to catch up with old friends. “Everybody in India is my friend,” he laughs, adopting a more serious demeanour, “I’ve a lot of friends. I’m blessed in that sense. I’m very excited to meet Krishen, Ram Kumar… It goes without saying that these are painters of my generation and those I love the most. I wish we can do get-togethers of artists, writers and intellectuals as in the days gone by.”

Born in Mandla, Madhya Pradesh, Raza’s love affair with art began quite early, as he moved from Mandla to Damoh and later studied painting in Nagpur, Bombay and Paris. He unfailingly cites Paris as the land where he learnt how to paint. “You know, it’s very difficult for me to leave France. I can never forget my debt to France because it is here that I developed my art,” says Raza, adding that some of his closest buddies hosted a farewell do for him recently. “I was teary-eyed. I was touched. But I have to move on.”

Ashok Vajpeyi, chairman, Lalit Kala Akademi, and an intimate friend, was present at the party and observed that Raza was indeed heartbroken. “There was a bit of France in him when he’d visit India, and now there’ll a bit of India when he goes to France,” says Vajpeyi, who’s been instrumental in persuading Raza to return.

Indeed, Paris is where Raza mastered his art. During the early Paris period, he was, like most artists of the time, taken in by Cézanne (whom he refers to as “immortal”), Gauguin, Van Gogh and other European masters. Raza’s working style has changed dramatically over the years. He’s also been influenced, amongst others, by the American Abstract Expressionists. By the late 1970s, the iconic bindus, of geometric proportions, a source of life with their profound symbolism, emerged as a concentration point. Raza modestly credits his schoolteacher, Nandlal Jharia, for the origination of the bindu. Jharia would draw a point on the board so that Raza could concentrate, and it was this, followed by a visit to Madhya Pradesh, that transformed Raza’s palette.

However, Khanna calls Raza a “great colourist” and his bindus, “very sophisticated studies of Nature.” But the Gurgaon-based Khanna doesn’t quite know whether Raza’s art will mature and deepen further, perhaps heralding another chapter in his oeuvre, after moving to India. “Well, he has already achieved so much. He’s a great painter. I hope India does much good to him. As for maturity, an artist always matures with time,” says Khanna. Padamsee, on the other hand, characterises him as a “brave artist”. Says Padamsee, “Brave because he left whatever he was doing to follow a very different style of painting.” Vajpeyi, who has written a book on Raza titled A Life in Art, expects his work to intensify. “I do believe he’ll be rejuvenated here and that his art will find new energies.”

For Raza, reactions from one’s peers are pivotal to an artist’s development. “It’s important to receive feedback in any form. But frankly, all my life I’ve only tried to work as best as I can. That’s all I know. For now the priority is to see India again, to visit Madhya Pradesh and travel to other parts of the country if possible. These days, I often find myself very tired and mostly lying down. Let’s admit it, my energies are limited. But I want to work till my last breath. I’m just dying to get back. Wait, wait,” and a few seconds later his voice booms, as if with renewed passion, “I’ll tell you this line—it’s from a folk song from my childhood—‘Tera tujhko saunp de, kya laagat hai mor. Mera mujhmein kuchh naheen jo hovat so tor (I give you only what is yours, nothing of my own. I have nothing of myself in me, whatever there is, belongs to you). Everything I got is from India.”