The Jaipur-Atrauli Gharana bemoans the loss of its last legend Dhondutai Kulkarni (1927-2014), a vocalist who shunned the limelight in quiet pursuit of her music 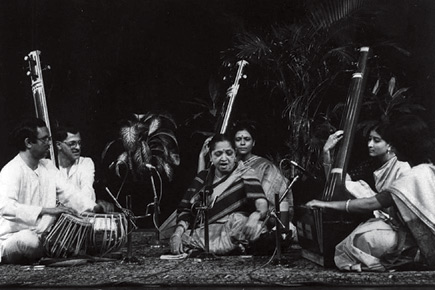 The Jaipur-Atrauli Gharana bemoans the loss of its last legend Dhondutai Kulkarni (1927-2014), a vocalist who shunned the limelight in quiet pursuit of her music

Known for its majestic vocalism and esoteric appeal, the Jaipur- Atrauli Gharana mourns the loss of one of its last living legends— Dhondutai Kulkarni, who passed away at 86 in Mumbai on 1 June 2014. As the only disciple of Kesarbai Kerkar—one of the most enigmatic and awe-inspiring personalities of Hindustani classical music, she was a storehouse of knowledge, wisdom and memories.

Dhondutai’s place in the universe of Hindustani classical music has been one of silent significance. Having trained with five illustrious gurus of the Jaipur-Atrauli Gharana, and being the only one who had access to the aesthetics of Kesarbai Kerkar’s style as a student, she was a critical link in its musical legacy. Despite her privileged position, talent and critical acclaim, she never quite captured the limelight in the concert circle. Her journey exemplified a silent sadhana.

While going through one of her old cassettes sent by her disciple Namita Devidayal- who is also the award-winning author of The Music Room—I was deeply moved by a particular bandish in Raga Bhoop Nat. While her voice had a thinner timbre than Kesarbai Kerkar’s deep-throated projection, the expansive aalap, the interplay with the landing note and the exquisite delineation had the distinct Jaipur-Atrauli stamp. What struck me most was the absence of any attempt towards showmanship. The quiet authority and self-absorbed patience with which she meditated on the raga revealed her purism.

Her musical journey started out as her father’s dream. In the 1920s, a Brahmin school teacher in Kolhapur wanted to devote his life to music. Though he trained under various gurus in vocal music and tabla, he found himself short-changed in his learning curve. As a teacher himself, he tried to analyse the lacuna in his musical training. Held back by family responsibilities, he gifted his dream to his daughter Dhondutai, born in 1927. At the age of five she tagged along with him as he requested Natthan Khan, the nephew of Alladiya Khan (known as the founder of the Jaipur-Atrauli Gharana), to accept her as his disciple. Initially, the maestro refused. He was not open to the idea of teaching such a young child, and that too, a girl. Undaunted by social norms and people’s reservations, he devised an ingenious strategy for getting his daughter trained in the art. He took a friend to learn from Natthan Khan and agreed to pay his fee as well. Through his friend he wanted his daughter to receive the music education that was otherwise denied to her. On realising this aspect of the complete picture, Natthan Khan was moved. He relented and started with 15-minute taleem sessions for the young girl. By the age of eight, Dhondutai was already a performing artist on All India Radio, and by 20, she was an ‘A-Grade’ artist.

This young girl not only imbibed the powerful and strenuous gaayaki of the Gharana from her gurus, but also the resilience and determination of spirit from her father. “I remember that even as a child I used to say that I want to learn music from Kesarbai,” she recalled in a telephonic interview I did with her for a radio show on Kesarbai’s death anniversary, “I remember expressing my desire to learn music from Kesarbai, though I hardly understood music at that age. I do not know why I used to say it, but I was sure that is what I wanted.” Having learnt from stalwarts like Bhurji Khan, Azizuddin Khan and Lakshmibai Jadhav after her initial training with Natthan Khan, she was already deeply grounded in the Jaipur-Atrauli aesthetics. Further training with Kesarbai Kerkar, who was known for her ‘voice of the queen’ effect, would have given her wings. The only catch was that Kesarbai Kerkar did not accept any disciples.

The twist in the tale emerged many years later. After a concert in her later years, the editor of a newspaper posed a question to Kesarbai that reverberated deeply with her concerns for the future of her musical legacy. Soon afterwards, her statement was published in a newspaper, “If somebody is ready to work hard as I did, then I am ready to teach.” Immediately, Azizuddin Khan urged Dhondutai to write to her. Kesarbai replied asking her to come to Mumbai. From 1962 to 1971, Dhondutai was immersed in dedicated discipleship with Kesarbai. In 1990, she received the Sangeet Natak Akademi award.

Talking to Dhondutai was an interesting experience. She charmingly balanced dignified reflections with humble candour in her Marathi-laced-Hindi conversations. Her honesty, knowledge and unpretentious liveliness were disarming. As a radio host, I was used to the ‘holier-than-thou’ attitude of musicians over their gurus and gharanas. Dhondutai stunned me with her strikingly sincere and critical analysis of her guru’s music, “You see, Kesarbai’s voice was very bad initially and her breath was very short. It used to break after one or two surs. But Alladiya Khan worked hard on her voice. I wanted to know that voice culture technique, [for it] changed the texture and style of her voice completely.”

Her life was steeped in solitude and spiritualism. The silent spiritedness of the early days had settled into her life choices. She lived alone, chose not to marry, didn’t believe in running after the limelight. She was happily reconciled to ‘being different’.

“I don’t regret anything. Actually I am made differently. I never ever thought about having my own family, home, husband, etcetera. My sister and brother’s children are like my own children. From childhood I devoted my life to two things only—music and spiritualism. I am made like that. All my students are like my children.”

The strength of her beliefs and fortitude are as much a part of her legacy as the repertoire of rare and compound ragas and voice culture techniques she has passed on to her students. When asked the same question that Kesarbai encountered decades ago from the newspaper editor, she had replied, “I am very optimistic. Whosoever has come to me to learn, I have taught them. But it is also true that the way I dedicated my life to music, nobody is going to do that now.”