The life and struggle of an unlikely hero 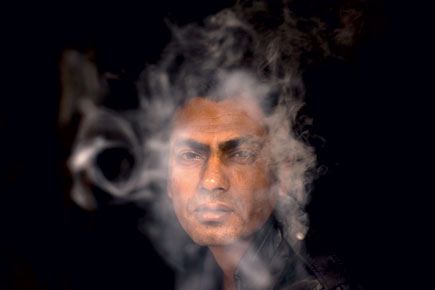 The life and struggle of an unlikely hero

There is a board with the shooting schedules, a television, and an iPad. He is waiting. There are the Aviators. I wear them as a tribute to Faisal Khan in Gangs of Wasseypur, the Anurag Kashyap film that has pitched Nawazuddin Siddiqui as the new anti-hero, the dark, lean man, a struggler with no pedigree, a commoner.

He smiles. We decide to get coffee. He tells me he is trying to build his body for his next role. Then, a few minutes later, as he recounts stories of his days as a watchman, he tells me he will never build his body, for he, the method actor from a nondescript village in Uttar Pradesh, is everything that a Bollywood hero isn’t. He is an actor.

“I want my roles to be what men would dream of,” says Nawazuddin.

The man, with a cigarette dangling from his dark, chapped lips, begins his tale of rejection, and then redemption, and then celebration.

He had to learn to dare the mirror. He made the most of what stared back at him—a brooding man with features that weren’t striking.

But if you looked long enough, it became appealing. In his case, he started to like what he saw. So did the director who promised him one day he would cast him in a role that would redeem him. “If you look at him long enough, you find him beautiful,” said Anurag Kashyap. “French women went nuts after him at Cannes.”

Many long years have passed since that encounter in an alley in his village Budhana as she rushed to watch a teleserial at a neighbour’s house that had the first and only TV set in the village. She was fair, with large black eyes that followed him around, encouraging him, making him nervous, and he would try to read meaning in her glances. Twice, her eyes greeted him. At 10 am and again at 4:30 pm, and this continued for six months until he decided it was time to speak with her. One night, he blocked her path as she hurried to watch TV.

“I am getting late for the serial.”

A hurt lover returned to his house. Eight years later, he called his friend Javed in the village.

“Please find her and tell her to watch TV at 9 pm tonight.”

“She is now the third wife of a fanatic. There are many children in the house. Seven by the second wife. Five or six by her. He doesn’t let her watch TV,” Javed told him over the phone.

In his little village in Muzzaffarnagar district of UP, his face has been plastered on walls. Faisal Khan of Gangs of Wasseypur I. His parents went to a film theatre in the nearest town 40 km away to watch his performance.

For years after he left his village in 1990, Nawazuddin kept chasing the idea of love, he says. He was dark, and short, and lean. He was awkward, and confused. He was unsuccessful, and likely to remain so. Love wanted more.

For a short time in 2002, he was dating a girl in Bombay. For months, they’d meet, and speak over the phone. One night he texted her: ‘Hum kafi dino se dost hain. I think we must marry now.’ No reply. For days, he tried her number. Still no response. Finally, when she answered, she said they shouldn’t speak to each other.

On the walls of his apartment he shared with friends, she had scribbled her name entwined in his. He tried erasing it. But, like the memory, the ink marks would just not go. Finally, he put a fresh coat of paint on the walls.

Those were the years of struggle, a state of suspension between hope and dejection. He was the struggler. He would keep at it. In love and in his career.

He once asked a junior at NSD if she would like to go out with him. “Ghumne chalogi mere saath?” he’d asked. The two of them went to a park in the CR Park area of Delhi, and sat on a bench. They sat in silence waiting for the other to say something. Evening was upon them. Some of his tension began to ease. He looked around, and then slyly placed his hand over the girl’s.

“Kahin bhi rakh doge? Permission toh leni chahiye (You’ll place it anywhere? You should ask me first),” she made it clear.

In GoW I, Faisal Khan, smitten by Mohsina, played by Huma Qureshi, replays that scene. “Anurag loved the idea,” Nawazuddin says, “He wanted it in the film.”

He came to Mumbai 14 years ago. In 2004, which was one of the worst years of his struggle, he couldn’t pay any rent. He asked an NSD senior if he could stay with him. The senior said if Nawazuddin was willing to cook him two meals, he would let him share his apartment in Goregaon.

“It was such a sad time,” he says. But except for small roles, he didn’t land a “meaty enough role.”

“Here it is,” he says. He used to like a batchmate of his, another struggler. She lived in Goregaon East. Once, when her boyfriend was out of town, as he knew, he smoked himself high on hashish and went to her house. He needed to be stoned out of his mind for it.

“It is a very sensuous song, isn’t it?” the girl said.

“Tum bhi toh sensuous ho (You are very sensuous too),” her marijuana-stoned visitor said, “Can I ask for something? You won’t mind, right?”

The girl chased him out of the apartment. Even this scene is there in GoW 2.

“And you convinced Anurag to incorporate this as well?” I ask.

“He liked it when I told him,” he replies, “Maybe my batchmate has seen the film. Maybe she will remember.”

This he heard many times over. For hours, he would stand in front of the mirror and study his face. It was the antithesis of the Bollywood hero’s. Years went by. He was noticed. In Kahaani, he played an enigmatic cop, and women started texting him. He was not used to such attention. When a girl kept messaging, ‘I think I am falling in love with you’, he decided to meet her. They fixed a time. When he arrived at Seven Bungalows, he called her phone. An attractive woman’s handset rang, and he introduced himself to her.

“She didn’t recognise me. I wasn’t the same macho police official. She had fallen in love with the character. Here I was, wearing chappals. No moustache. She looked as if she wanted to leave,” he says, “I have learnt to take attention from women not so seriously.”

Nawazuddin vividly recalls his village life, the mornings and evenings, when he would take the cows and buffaloes to the banks of a river that flows past Budhana. They’d get into the water, and he would too. He was content, except for the leaky roof during the rains of the crumbling mud house he and his family lived in. His father is a farmer, and he has seven other siblings, including two sisters. He is the eldest.

To watch movies, he would go to Bharat Talkies, an old tin shed in Budhana. It played C grade movies made by Joginder Shelly, who has directed and produced such films as Ranga Khush and Bindiya aur Bandook. In the tin shed, they paid 75 paise and sat on bricks. That’s how he was first enthralled by the power of cinema.

After senior school, he left for Haridwar to study at Gurukul Kangri Vishwavidyalaya, and then moved to Baroda to work as a chemist. A year passed. His heart was not in it. Someone told him he should head to Delhi, and try theatre. He trained at National School of Drama and joined street theatre groups. But cinema occupied his dreams and lured him to Bombay.

In the early 2000s, he acted in Joginder’s Bindiya Maange Bandook, a sequel. But the director passed away. “The film never released,” he says, “I did it for free.” And in a forthcoming film called Miss Lovely, Nawazuddin plays a C-grade film director. It made it to the Cannes Film Festival, and is due for release early next year.

His first break, though, was the Aamir Khan starrer Sarfarosh in 1999. After that, he would hang out at film studios and shootings, but got roles that were stereotypical. He was dark, had hollow cheeks, and lean. He fit the profile of a poor man. He was always the dhobi, the watchman, the extra on the sets. During his Delhi days, he had worked as a watchman. Now he was earning just about Rs 1,000 for each of his few seconds on screen. He was always in debt.

“I was angry with the struggle,” he says, “I was so angry with everything.”

There was a year he had no money. He’d eat if someone offered food, or sleep on an empty stomach. He’d travel in local trains without a ticket, walk for hours, smoke shared cigarettes. It gave him confidence that a man could live without money.

In GoW, with a smile of satisfaction, Faisal avenges his father’s death by shooting dozens of bullets into the enemy who sits helpless on a toilet seat. That’s Nawazuddin’s favourite scene. “It all came out—15 years of struggle. In most other roles, I was the one beaten up. It was like my life, down and out. But here, I was the one with the gun. The smile was real.”

There was a time no one took him seriously. When he’d say he wanted lead roles, his friends would dismiss him with a blunt “You are not hero material”.

“What is ‘hero material’?” he’d shoot back, hurt, and angry. “Take me and a hero in a frame. Ask us both to perform. I promise I will entertain you.”

Up a small flight of stairs in his apartment block, a door on the extreme left leads into the small, seemingly uncomplicated world of our method actor. It’s a modest flat. A mattress on the floor, a table against the wall. Zohra Nagar on Yari Road, central Mumbai.

“I want to be the highest paid actor in Bollywood,” he says, “Not because I love money but because actors aren’t paid well.”

Pointed patent leather shoes, a not-so-ironed shirt and flat front pants. A little grease paint on the face. At a busy Matunga East signal, the crew is busy shooting for Dabba or Lunchbox, an Anurag Kashyap co-production that he is doing with Irrfan Khan. They had acted together in Bypass, a short silent film.

Nawazuddin stands in a corner, smoking. A teenager walks up to him: “Autograph, please.”

He obliges. A bunch of college girls walk by. They steal glances at him. He is awkward. For the umpteenth time today, he rides a scooter adorned with roses. They have been shooting since 6 am and the roses have wilted by now. The scene has him dropping actress Nimrat Kaur and a little girl to a taxi stand in Matunga. He looks at ease, though he learnt how to ride the two-wheeler just this morning.

Someone calls him a ‘junior artiste’. But he doesn’t let it bother him. “I am the leading man,” he says.