Neeraj Ghaywan’s debut set in the backdrop of the Ganga gets a glorious opening. The director in conversation with Open 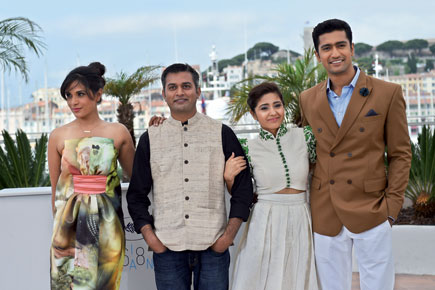 There is a small video clip that went around on social media right after Neeraj Ghaywan’s film Masaan (‘Crematorium’) premiered at the Cannes Film Festival in late May. It saw about 300-odd people—including filmmakers, critics, actors, writers, producers and film enthusiasts from across the world—honour this Indian film with a standing ovation. Under the bright houselights in the theatre and against the roaring applause in the background, Ghaywan broke into tears. He walked around hugging all the members of his cast and film crew present in the theatre, witnessing what was easily the best four minutes of his professional career. The following day, he thanked every single one of them in his acceptance speech after the film was awarded the FIPRESCI International Jury of Film Critics prize. The same day, Masaan also picked up its second award, the Promising Future prize in the Un Certain Regard section.

The film now joins the proud but small list of other Indian winners at Cannes, including Mira Nair’s Salaam Bombay (1988), Shaji N Karun’s Piravi (1988), Murali Nair’s Marana Simhasanam (1999), Gitanjali Rao’s Printed Rainbow (2006) and Ritesh Batra’s The Lunchbox (2013). “Your first film is when you hardly know how to hold the camera; you’re still learning the ropes. So imagine when that film beats about 7,000 odd entries from 250 different countries to be screened at such a prestigious festival. Even without an award, it’s worth celebrating,” notes Meenakshi Shedde, South Asia consultant to the Berlin film festival and a curator of festivals worldwide.

For Ghaywan, it all now seems a bit surreal. Reminiscing on his Cannes moment in his office in Versova, he confesses to have blanked out more than once. “It was so overwhelming. I sneaked into the last screening of the film, just to see the response, and I saw lines that led all the way to the roads outside. After the film, a couple of people came up to me, held my hand and said how much they could relate to it.” The setting of the film in Varanasi doesn’t seem to hold its universal appeal back. Much like The Lunchbox, which had its heart in Mumbai but went on to be among the best loved Indian films abroad.

“Masaan has three stories set against the backdrop of the Ganges, all dealing with the theme of escape,” says Ghaywan. “One of them is about a community of people who cremate dead bodies in a very morbid fashion. They have no compassion towards their job, no emotion towards it. There’s also a story about a young girl who is a receptionist at a coaching centre and who has an affair with a student in a hotel room. And the third tale is about this girl’s father who is an honest pandit and who’s trapped between paying a bribe and being shamed because of his daughter.” Says a review in The Hollywood Reporter of the film: ‘Masaan is part of the new generation of indie films whose clear intent is to set ablaze a hidebound society’s constrictions on personal liberty.’

Ghaywan says that it was important for him and writer Varun Grover that they get their milieu right. “I knew it shouldn’t sound like urban kids trying to comment on small town life. It had to be real. Varun and I just headed to the ghats in Varanasi for 40 days before we started writing the film. We lived their lives, understood their responses to situations,” he says. As part of research for the receptionist’s story, Ghaywan and team interviewed over 40 women from Patna on what they thought of pre-marital sex. “You will be surprised to know that more than half of them admitted to sleeping with their boyfriends and almost all of them said they had gotten off on porn. So the stories in the film break a lot of perceptions through the characters.”

Hyderabad-bred Ghaywan’s journey to the French Riviera is no less fascinating. Until a year ago, he was just one of Anurag Kashyap’s trusted assistants who was lugging everything from lights and cameras to printers from one end of the set to another. “When I assisted Anurag on Gangs of Wasseypur, I was a rookie. I was a 30-year-old starting his life from scratch. I was an intern who was working a 4-am shift and couldn’t feel his legs by the end of the day. It was tough, painful, humiliating, frustrating and liberating all at the same time. What I got out of that experience is something I cannot describe in words.”

Ghaywan was brought up in a middle-class family where success was measured by a professional degree and secure salary. “I grew up in a South Indian state, but since I was in Kendriya Vidyalaya, I was more cosmopolitan than most others, and I had a very vivid imagination.” But he always felt a bit suffocated in his MBA business suit. As the only son in his family, he also had to deal with the pressures that came with it. “I was supposed to do my engineering, but I could not go to the US like most of my friends because it was the year 9/11 happened,” he says.

Each time things wouldn’t work for him, he would turn to movies. It was his escape, a world he could disappear into whenever he wanted. He still remembers that hot day in Chennai when his visa got rejected. His father dragged him into a cinema hall for a screening of The Matrix. “Imagine a father and son with a suitcase right in between and a lovemaking scene unfolds. It was really awkward! But yes, in that way, films have somehow been a part of my life.” He grew up on Bimal Roy and Shyam Benegal classics that would appear on Doordarshan every Sunday. He was the only student of Symbiosis Institute of Business Management who was serious about his film class every week. As soon as he graduated, he was picked by Tech Mahindra, but the cinephile in him refused to die. Soon he started writing and editing for the film blog Passionforcinema.com, which Anurag Kashyap used to patronise. “I wrote these long reviews of films that I loved—like Nadiya Ke Paar and Bandit Queen. A bunch of us used to vicariously live our lives through that blog. It was our alter life.”

The blog became the film school he never went to. “Today, if you ask me my strongest influences, I would name people like Billy Wilder, Terrence Malick, Bergman, Fellini… These are people whose works I have followed. We would land up at Anurag’s house and discuss films over chai and biscuits. I was exposed to more cinema in those months than ever before in my entire life.”

Ghaywan’s corporate life, however, soon started to get to him. He was never sure if he was meant to make movies, but what he was sure of was that he couldn’t spend the rest of his life behind a desk. “It sounds a bit filmi, but I used to listen to the songs of Udaan to keep my inspiration alive.” It was on one such afternoon while working with UTV that he decided to resign. “I was in tears when I called Anurag. He said I shouldn’t take short cuts. He immediately asked me to come assist him on Gangs of Wasseypur. I feel so silly, but the first question I asked him was how much my CTC (cost-to-company) would be. He just laughed and said he’ll pay my rent whenever I needed it.”

From hobnobbing with business executives in five-star lounges, Ghaywan was suddenly drawing up continuity Excel sheets, scene by scene. His background in research made him a favourite on set among all departments, from art to costume. “From Rs 16 lakh per annum, I was earning Rs 14,000 per month. I had seen the rich life, parties, going out every weekend, shopping… all of that. Suddenly, all I could afford was a quarter of Old Monk, which I had to share with four others.” His parents stopped speaking to him and all he had was this new life he’d chosen to live. He had given up a lot for cinema and was ready to give it his all to make a go of it. “Generally, people get very aspirational in this industry. They lose passion and hard work to be able to live the glamorous life. Since I had seen all that, it kept me grounded. I had no time to party. ”

It was his short film Shor (2011), about a couple from Varanasi struggling to cope with life in the city, that had people take notice. “When I saw Neeraj’s short, I wasn’t surprised how good it was, but his way of storytelling was a revelation to me. It was sensitive yet hard-hitting. It shook something within me,” says Kashyap, who even offered Ghaywan the job of a first assistant on his dream project Bombay Velvet. “When Anurag said I should work with him on [that movie], I said ‘okay’, but within two days, I decided I had to start making my own film. When I said that to him, he kissed my forehead and said he was proud of me.” The other words he couldn’t forget were of Jaideep Verma, a filmmaker who, after watching Shor, told him: “Passion is finite. ” “That line still haunts me,” says Ghaywan, “It was then I decided that I was ready to make Masaan. Today I feel a bit embarrassed by all this attention, and all I tell myself is that I’ve got to stay humble.”

Apart from accolades at Cannes, Masaan has also won a filmmaking award at Sundance Lab and has been released across France by Pathé, a prestigious producer and distributor of cinema. In one scene of Masaan, the director pays tribute to the iconic Spanish film The Motorcycle Diaries. At Cannes he was in the same room as the film’s director Walter Salles with just a glass of champagne between them. It’s the kind of start a debut filmmaker can only dream of. “Masaan’s journey opens up doors not just for me but for many independent filmmakers in India who wonder if their movie will ever be made. If I can stay true to this success, that would be my biggest achievement.”

(Masaan releases on 24 July in theatres across India)