Nawazuddin Siddiqui, the poster boy of indie cinema, plays his most unnerving role to date 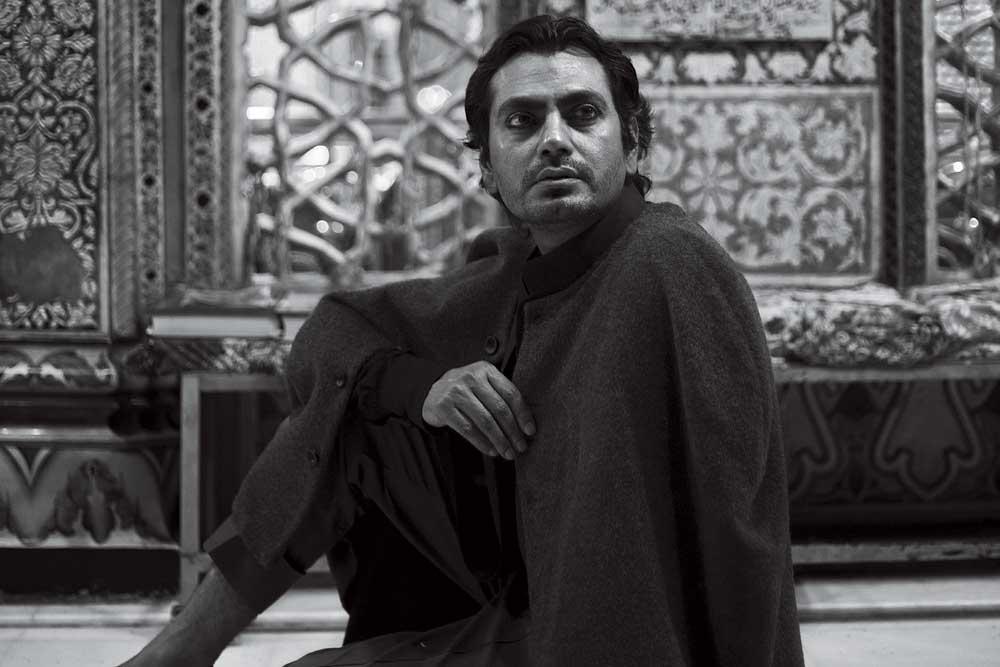 IT WAS AN unusually rainy afternoon in Mumbai. The year was 1998 and the month August. Shops shut down early, office goers rushed towards home, and trains moved carefully over flooded tracks. A group of five struggling actors and a writer sought shelter from the rains at Andheri railway station, all of them new to the merciless downpour that invades Mumbai. In the group—that shared two cutting chais—was comedian Rajpal Yadav (the only known face amongst them) and Anurag Kashyap, who was reeling from the after-effects of the super hit Satya. “He did not know me back then. In fact, he did not even pay much attention to me. But for us, he was the guy who’d written Satya! The film that opened the doors for many actors like me,” says Nawazuddin Siddiqui, speaking in Hindi about his first meeting with Kashyap.

Eighteen years later, Siddiqui tells this story with a hint of pride and a lot of gratitude. When he rolls his cigarette, he switches between crushing his tobacco and looking straight at the listener. He holds you with his bloodshot eyes, and his coarse hands move only when they wish to emphasise a point. “When I played the role of a waiter in Shool, Anurag asked me why I was doing such a small role. I said it would pay me Rs 1,500, which was worth a few months of rent,” he says.

Siddiqui’s fifth film with Kashyap as director, Raman Raghav 2.0, released two weeks ago and it’s almost like life coming a full circle. He first made his mark with Kashyap’s Black Friday (2004), where he played Tiger Memon’s secretary Asgar Mukadam. He was an unfamiliar name then, but his performance stood out. “Black Friday did not release for years, but Anurag said one thing to me. He said the day he could afford to hire actors of his choice, he would call me with something that I really deserved.”

Raman Raghav 2.0 isn’t among the better films to come out of Kashyap’s school of cinema. But if there’s one thing that makes it watchable, it is Siddiqui’s portrayal of a serial killer. Yes, he’s scary and at times mind-numbingly so. But here is a psychopath who makes you laugh too. He sucks you into his story, extracts your empathy for just a moment, before he reveals his real self. Siddiqui reads his audience way before they can read his performance. He wears many masks, and keeps us guessing till the very last minute. “My character in this film was by no means easy to play. But when you work with someone like Anurag, he puts so much faith in you as an actor that you can do anything and go anywhere with the character,” he says.

Few actors in Indian cinema can lay claim to the kind of career graph that Siddiqui has charted in the last 20 years. From a small-time criminal in Sarfarosh (1999) to a pimp in Talaash (2012) to a CBI officer in Kahaani (2012) to a rookie reporter in Peepli [Live] (2010) to a gangster in Gangs of Wasseypur (2012), for him it has never been about the duration of the role. He explored each role unflinchingly—to create something real beyond the script, which his audience could then interpret.

When people ask me if I feel intimidated working with strong actors like Amitabh Bachchan, I say never

“It’s said that when you take something from your character, even the character sucks something out of your life. If I’m playing a dark part, of course I am going to be affected. And I have played so many characters by now that I feel a bit empty. I don’t feel like crying or laughing or enjoying myself too much… It is when you are empty that you will be able to fill yourself with an emotion in front of the camera,” he says. This approach seems dark, but it has been shaped over the years by dramatic on- and off-screen experiences, starting from when he was a little boy in Muzaffarnagar, Uttar Pradesh.

MUCH LIKE FAIZAL Khan in Gangs of Wasseypur, Siddiqui grew up in a town ridden with crime and criminals. “When Anurag sent me the script of Gangs, I smiled to myself. It was what I had witnessed for years in my village. People being kidnapped and killed was like an everyday affair. But thankfully it never impacted my life directly; I had a happy childhood,” he says. The oldest among seven children, Siddiqui was the prankster in the house. He would sneak out to go watch the latest C-grade film in a cinema hall 40 km away from home. “Hamaare yahaan C-grade films lagti thi. Films like Andheri Raat Mein Diya Tere Haath Mein, John Meri Maar lo… I grew up watching those films. It used to be so much fun to watch them. They were not too complicated. There’d be one song, one porn clip, some fighting, that’s all. The audience outside used to ask us if there’s a sex scene and only if we said ‘yes’ they’d go in,” he says. He was the kid who loved to fly kites and would jump from roof to roof to capture them. “I was never very good at studies. I was naughty and flirtatious as hell. But I was smart. I used to farm with my father and go to college.”

Being an actor didn’t cross his mind till he was introduced to theatre in his MSc days in Bihar. He dropped out of college to join a Gujarati theatre group and then eventually came to National School of Drama in Delhi to train as an actor. “It was at NSD that I discovered myself. I always used to play comic parts till a French director introduced me to another person within me. We were doing Chekhov’s Ivanov and it was excruciating for me. If a comedian is asked to walk straight he will always do something weird, but never walk straight. I couldn’t get my walk right for a good 15 days. My teacher killed that habit of mine.” That was his biggest moment of transition. “I saw how much was untapped within me. I realised there are so many people within this one person. Like within you there’s a violent woman, a sweet child, a mature girl, a friend, an enemy, and many more. It all just needs to be discovered and that’s what an actor does,” he says.

Nawaz did over a thousand street plays in Delhi after graduating from NSD, but theatre in India doesn’t pay and to make ends meet he had to move to Mumbai. “I did not come here to become a hero. My main motivation to come to Mumbai was survival. I would do small roles in TV serials and get paid per day. I wouldn’t go to bed hungry and that was all I expected. But after some time, we were replaced on TV by six-feet tall, fair men. My aunt would often ask me to take a good look at myself in the mirror before thinking of becoming a hero. Those were the days I realised how the perception of beauty was so fickle in the minds of most people.”

I have played so many characters by now that I feel a bit empty. I don’t feel like crying or laughing

Mumbai was also the city that taught him to survive. He often had to walk for hours to get to a set to shoot one scene of a TV show, the names of which he doesn’t even remember. “There were days I did not have a roof over my head. I have walked barefoot to look for work. But it’s all part of the journey.”

During this journey, he made friends, lovers, admirers, and survived on hope. He came to know the stories of others, and saw how trust, mistrust, pain and passion coexisted in everyone. “I did small roles in a dozen films till I was finally noticed. A short film of mine, Bypass, was screened in universities in London and my director Amit Kumar would call me from there and tell me how girls in colleges love me in the film. Tab mujhe laga, bhai, hum mein bhi kuchh baat hai. Thoda confidence badhaa (Then I felt I was not that bad looking either. My confidence grew).”

The year 2012 (14 years after he came to Mumbai) was Siddiqui’s breakthrough year with three big films (Gangs of Wasseypur, Kahaani and Talaash), a trip to the Cannes film festival and a Special Jury National Award. Since then he has had at least one film a year that has made it to festivals such as Venice and Berlin, and has won awards for films like The Lunchbox (2013) and Liar’s Dice (2013). “In college I’d watch world cinema and see how their stories were so real, and performances so true to their form. When my work was being appreciated by those very people, it was somewhere a validation for my growth as an actor. Today when people ask me if I feel intimidated working with strong actors like Amitabh Bachchan, I say ‘never’. If I’m standing in front of a Bachchan and I think ‘Oh this is Amitabh Bachchan’, I’m being true neither to his character nor mine. If that’s going to be my attitude then I’d better quit acting,” he says.

Siddiqui now has at least five films that are expected to release over the next two years, including Ghoomketu, Lion and Raees. He’s on the wishlist of every prominent and upcoming director who has a challenging role to offer. He is the poster boy for out-of-the- box cinema. However, his popularity has not marred his authenticity. He can get lost in a crowd and considers that his biggest strength. “I got more than what I asked for. I am part of this world that is so fake that I often feel like I am acting more in real life than on camera. The image you are expected to portray is so fickle, so corrupt that you need to protect your real self. Which is why I go to my village from time to time, farm a little, live among people who are real, those who lead humble lives. I listen to their tragedies, their triumphs, and try to feel what they feel, so I can use it in my next film, next character.”