Naseeruddin Shah on Ismat Chughtai: ‘If only we can live half the life she did…’

Naseeruddin Shah relives his association with the world her mind had created—liberal and rebellious, compassionate and courageous 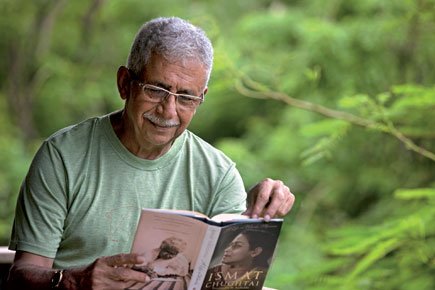 The first time I saw Ismat Apa we were in Lucknow shooting for Shyam Benegal’s Junoon (1979). I remember I was a bit nervous when Shyam told me she was coming. I had heard about her and for some reason imagined her to be this tall, thin, stern, eagle-like lady with short hair. The only thing I was right about was her hair. We were having breakfast at a coffee shop and in walked this absolute darling of a woman with white frizzy hair, looking like a complete scatterbrain. She called out to me, “Naseeruddin, yahan aao (come here),” and gave me a great big hug. She put her hand on my forehead and said zindabash and all my nervousness disappeared in that one moment. She was a figure of comfort. She was acting in the film as well, and I remember spending a lot of time with her. She was gregarious, talkative and childlike. I hadn’t read any of her works and she never spoke to me about her writings. She would always ask me about my family, my stories. In fact, I have had the privilege of spending an afternoon with the great Hindi writer Amritlal Nagar and Ismat Apa, having bhang with them without even knowing how great these two people were.

It was much later in 1998 when I walked into a bookstore named Danai in Bandra and the first thing that greeted me was a book of short stories by Ismat Apa. They were very badly translated and I immediately got the version with the Devanagari script. The minute I read them, I knew I had to tell these stories through our play Ismat Apa Ke Naam. My wife Ratna and daughter Heeba were unsure at first because the stories were in Urdu, a language most wouldn’t understand and they were from an era gone past. But the beauty of any writing is that it transcends the time it has been written in. When I was younger, I used to look down upon Urdu writing. I believed Wordsworth and Keats were the only poets in the world, Shakespeare and Shaw were the only playwrights in the world. Oscar Wilde was the only short story writer. It was during Gulzar saab’s Mirza Ghalib that my education in Urdu began and I thank my stars for that. I couldn’t believe my ears when Gulzar saab would explain the meaning of Ghalib’s poems. They were beyond anything I had ever read.

I felt the same way about Ismat Apa’s stories. She has never written about a boy and a girl falling in love and living happily ever after. She would always talk of dysfunctional relationships. She’d write about the less privileged. She has written a story about a bhangan, a jamadarni. She’s written about an Englishman who refuses to leave India after Independence because he was in love with a prostitute and ends up dying on the streets a penniless beggar. She writes about an older man and a younger woman getting involved. These kind of things were shocking back then. She writes about child abuse, about childbirth on the train—the kind of things we read about in the papers now. Her writing is universal; yes it’s a tired word, but these situations could exist in any time, era, in any country, because people are the same everywhere. Her take on sex, extramarital affairs, puberty evoked so much interest because of the way she presented the basic aspects of human life.

Let me show you something… (Gets up and brings to the table a large book of short stories from his bookshelf) This one is called Ismat Apa Ke Sau Afsane. A gentleman in Pakistan gifted this to me after watching our play. I’ve read about 50 stories of hers till now and each one is a gem. When we staged the play in Pakistan, most of the audiences would be young students and mostly women. After the play they would be besides themselves with joy. In Pakistan you don’t discuss the kind of stories Ismat Apa dealt with. After watching the play, one of the young girls told Ratna, “These stories are so true, but thank God my father-in-law wasn’t here!”

In the play I perform a story called Gharwali about the love between an elderly bachelor and his maid. An Indian friend of mine living in America for 40 years said he couldn’t stop crying after watching the play. He said to me, “When you sat on that moda with the kurta-pyjama, the angrakha and topi, my eyes welled up. When you sat on the chowki with the gowtakia and poured water from the matka, I started crying. These are things I have yearned for, for 40 years. I could feel the taste of the water when you were pouring it.”

This was the unique descriptive nature of Ismat Apa’s stories. We haven’t changed a word of what she’s written within the play because narrating it in her words is far more effective than enacting it as a complete story. In London, we had kids with blue hair and piercings watching the play and enjoying it thoroughly. I don’t think there is any need to put her works into a modern setting because it would become very pedestrian. To tell them as they are gives them an extra power because the issues she speaks about are issues that are still relevant. The stories even though set in that era evoke so much empathy, and they will 60 years later too.

For me, though, the most important thing about her writing is the compassion she had. She would write about a rickshawala beating up his wife in the slum, but without passing judgment on either. I used to perform Gharwali with a slightly mocking attitude towards the character of the maid, but then I realised she isn’t mocking the maid, but she is with her. She isn’t mocking Mirza (the Nawab) either. In fact most women writers would write about men in an aggressive tone, but Ismat Apa found the whole male race amusing. She came from a conservative Muslim family, but she was among the youngest in her family of five brothers and her feisty nature reflects in her writing.

One of the stories called Nivala, which I will stage at some time, is about a group of very interesting women in a chawl who are trying to find a groom for a lonely spinster who is a nurse in a hospital. They tell her “Mard ki zaat jo hai yeh thulla hoti hai, inke munh mein nivala thhooso nahi toh yeh nigalte nahi hai” (You have to stuff the morsel in the man’s mouth or else they don’t give in). It’s exactly what Shaw used to talk about. The life force exists in the woman, not in the man, but because of the way society has evolved, man has been made to feel he is the provider. Her works always reflected the voices of women around her, the social implications, the world around them, and the evocation of this whole injustice perpetrated on women since the beginning of time.

Despite that, the great writer Faiz Ahmed Faiz had a complaint against Ismat Apa, that she wasn’t political in the sense that he was. He wrote about injustice, poverty, plight of the coolies. Ismat Apa never went that route. But her stories are no less political because they talk of the politics of human interaction. They don’t talk of injustices, though a lot of her stories are set in the pre-Independence, Partition, and post-Independence times. But the beauty of it was that she was never bitter. She would never write a poem like Faiz’s Subh-e-Azadi (Freedom’s Dawn). It is such a bitter, bitter poem where he says this is not what he wanted in the name of freedom, this separation, this animosity. She would write a story like Hindustan Chor Do about the Englishman who never left India. She would make fun of everything, the mullahs , the pandits, the teachers, the politicians , but she never said anything overtly political.

Even her contemporaries like Manto once criticised her for not going all the way with Lihaf. The story ends with the young girl refusing to describe what she saw under the lihaf even if she was given a lakh rupees. Manto had then said to Ismat, “Kambakht, bilkul aurat hi nikli,” but later he took back his words. It’s a story that has given a certain notoriety to Ismat Apa which makes people curious about her. On the one hand Lihaf made her famous; on the other, people read nothing else but Lihaf. It’s not a titillating story, it’s not about lesbians but about child abuse. It’s a disturbing story. She never says a single thing directly, it’s all elliptical. People failed to understand that. Her stories have been translated into a 100 different languages; zillions of stuff she has written after Lihaf, no one has read—her novels, her autobiography, her other short stories. Lihaf just became a millstone around her neck, unfortunately. Probably even why she did not find too much success in cinema because the kind of films she was trying to make were again way ahead of their times. Like Sone ki Chidiya, which is about prostitution, referring to the country as the bird in the gilded cage which wants to fly away.

When I was a child I was told that Ismat Chughtai badi gandi kahaniyan likhti hain (Ismat Chugtai writes obscene stories). They used to be published in an Urdu periodical called Khatoon-e-Mashriq, and my mum used to read it and she would say “tawbah tawbah”(my my). Today after so many years, we are slowly beginning to understand the true meaning of her words. Even after she’s gone, her stories are a source of comfort to us. She had her share of ups and downs and tragedies. She was taunted, reviled, called names, people wrote obscene letters to her, she got death threats, she was hauled to court, but she kept her chin up, and continued to look at the world with love and affection. She wanted to be buried at sea, but it wasn’t possible. The mullahs turned up even during her cremation saying, “How can you cremate her? She’s a Muslim.” The drama in her life ceased to stop till the very last minute. In a country which at the same time had Ismat Chughtai, Saadat Hasan Manto, Rajinder Singh Bedi, Krishan Chandar, Sardar Jafri, Kaifi Azmi, Akhtar Usman, Jan Nisar Akhtar, one only wishes that writers today take inspiration from their works. If only we can live half the life she did, making a difference, creating a stir for the right reasons and be spoken about even after 100 years, then our lives would be of some meaning. n