The sculptor of Maharashtra’s most popular Ganesh effigy wants to patent the look, but can divinity be turned into property? 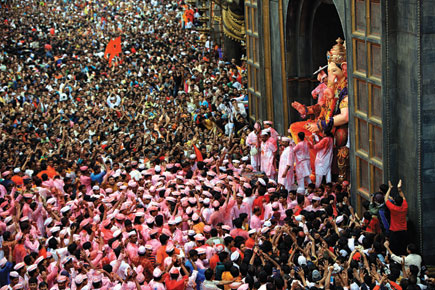 The sculptor of Maharashtra’s most popular Ganesh effigy wants to patent the look, but can divinity be turned into property?


During the 10-day Ganesh Utsav, one of Maharashtra’s most popular festivals, there is no count to the number of effigies that are worshipped and later immersed. This is done communally in housing societies, residential colonies, villages and localities, and privately in individual homes all across Mumbai.

The most popular effigy among them all is Lalbaugcha Raja, which, as the name suggests, is installed at Lalbaug in Central Mumbai. At least 100,000 people turn up every year to worship Lord Ganesh in this glorious form. The deity famously reserves the right to be worshipped first, but reputedly also exercises great generosity in granting wishes, smoothing over difficulties, healing the sick, that sort of thing.

It can be a two-day wait to get a darshan of the effigy. The queue of devotees snakes past the effigy’s highly decorated platform, through an elaborate shamiana, to the footpath outside, and on to the road, and on and on.

On 7 July this year, Santosh Kambli, the sculptor who makes the Lalbaugcha Raja effigy every year, filed an application with the Copyright Office in New Delhi to gain exclusive ownership of the deity’s look. If his claim goes through, Kambli’s copyright registration would affirm that Kambli Arts, the sculptor’s factory, is the owner of the design, especially the facial features, the distinctive smile as well as back-swept ears—and no one else can copy it. There is no set time-frame for how long it will take for this to happen, but he expects the Copyright Office to grant him the copyright once it completes the requisite paperwork, which depends on its workload. He is confident of it.

While there exist patents and trademarks associated with holy sites, like the Lalbaugcha Raja Ganesh Festival Association and Tirupati Balaji (for its laddu prasadam), this is possibly the first instance of someone claiming how a god looks in India. Possibly the first because it is nearly impossible to ascertain whether any other god’s looks have been patented before—the Copyright Office does not reveal its record of cleared and pending applications, nor does it routinely announce what copyrights it has granted.

To be sure, copyrighting Lord Ganesh’s Lalbaugcha Raja look would have repercussions. Thanks to its popularity, every Ganesh workshop in Mumbai and other places makes replicas of this very effigy. The design has effectively become a community resource. This explains why a near furore has been raised over the morality as well as legality of Kambli’s action. Through July, the Marathi media was full of other Ganesh sculptors’ decrying Kambli’s move; it would have a terrible impact on creativity, went the chorus of criticism.

In the popular broadsheet  Maharashtra Times, a well-known Ganesh sculptor Vijay Khatu, who does not primarily make Lalbaugcha Raja-style effigies, was quoted as saying that art should be boundless if it is to survive and flourish. He said the fear of copyright infringement would discourage even derivative works.

Most other sculptors of Lalbaug—the hub of Ganesh sculptures in Mumbai—simply see Kambli’s move as one of bad faith. “Is he trying to make money off royalties?” asks an angry effigy maker.

Thirty-eight-year-old Kambli is a marketing manager-turned sculptor. While he is famous for the Lalbaugcha Raja design, he was not really the originator of this mould, so to speak. It is his grandfather who is said to deserve the credit—for having first sculpted Ganesh this way back in 1935. Kambli’s father and now Kambli himself are inheritors of the design. “I am trying to protect a style my name is associated with,” says Kambli.

It goes without saying that the Lalbaugcha Raja is big business. There exists no record, not even unofficial, of how many Ganesh replicas are sold in Mumbai, but you can see the design everywhere during the festival.

Then there is the rest of Maharashtra, Goa and North Karnataka, where Ganesh Utsav has spread in recent years. There is also a smattering of international demand. In 2008, Kambli shipped a full containerload of effigies for installation at an Amsterdam-based museum. Adding to its Bollywood-like brand aura, each year the media dutifully reports the crores donated to Lalbaugcha Raja by devotees.

Ganeshotsav is a festival in which people splurge to prove their devotion. A two-foot tall effigy of Ganesh made of plaster of Paris (not just a Lalbaugcha Raja replica, but generally) can fetch Rs 10,000 if the sculptor is well-known, going all the way up to Rs 1.25 lakh for a 12-foot version. As these are submerged in the sea at the end of the festival. So the demand is annual.

There is another factor. A large number of devotees who believe that the original Lalbaugcha Raja has responded to their prayers install replicas in their homes each year thereafter. Thus, demand for Lalbaugcha Raja-style effigies is particularly bankable. Kambli makes only 100 effigies each year, of which 80 are 2.5-foot ones, all in the classic Lalbaugcha Raja style. The rest are made by others. So if Kambli wants to prevent other sculptors from using the style, he has his work cut out for him.

Also in the business is Uddhav Kadam, 24, a surgeon who juggles medicine with sculptural work, churning out 400 effigies a year (with his team). “I’ve been in the profession since childhood,” he says, as he examines the quality of freshly-moulded effigies like a doctor taking a patient’s pulse. I notice the Lalbaugcha Raja replicas on his shelves. Asked about these, he says, “Each sculptor adds his own touch to the concept.”

Indeed, not all replicas are complete copies. Many an effigy-maker remixes the concept. While the effigies Kambli makes are of the same old style, the same well-known pattern, the ‘pirates’ he wants to fend off have added their own features and arguably enhanced Lalbaugcha Raja’s style—hacked it and improved it. “If anyone wants to prevent copycats, that’s his business,” says Kadam, “But not everyone is a copycat.”

Vijay Khatu, a reputed sculptor who has become an unofficial spokesperson of the anti-copyright wave, terms Kambli’s action ‘protectionist’. “Art should get free play. It should never be bounded. That is how it flourishes,” he says. “Can Kambli fulfil all the demand for Lalbaugcha Raja effigies by himself?”

Like Kambli, Khatu himself is known for his distinctive style, his signature apparent in the typical shape of the pachydermous head of his effigies. Asked if he would also copyright his style, Khatu says, “Why would I? If someone is copying my style, he increases my goodwill in the market by reminding people of me. Also, it does not harm my business.”

But how specific is the copyright law? Can you really copyright the design of a smile, the placement of the eyes and ears? If it’s an original work, it seems, you can. But originality is open to interpretation—and in the hands of a good lawyer, dramatically so. Facts cannot be changed. But interpretation is like clay, easily moulded. It depends on what arguments are presented in court, says a copyright lawyer.

Another copyright lawyer, Mahesh Mahadgut, says Kambli’s copyright claim is not self-evident. “According to Section 17 of the Copyright Act, the copyright of an artistic work belongs to the person who is its author. But if the author, during the course of his work, has done the work at the instance of another person and has been paid for it, the employer is the copyright holder—if there was no agreement to the contrary. So, the Lalbaugcha Raja trust itself can stake a valid claim to the ownership [of the design], if it satisfies the criteria set out under Section 17 of the Copyright Act,” Mahadgut says.

The trust, on its part, says that it will object to the copyright claim made by Kambli, as his particular effigy is made for the trust, year after year.

But if Kambli’s claim is not obvious, why would the Copyright Office consider his application? “It [simply] believes you and grants you the copyright,” says Sanjeev Niphadkar, a lawyer who counsels applicants. “No copyright office in the world has the manpower to verify a copyright claim.”

To his credit, Kambli made it a point to inform the media of his application, even though he wasn’t required to. Unlike with a trademark, a copyright application is not published in newspapers to sound off anyone who might want to object to its registration. “You can copyright something without anybody getting to know about it,” Mahadgut points out. It is even possible for the same work to get registered in the names of more than one person, each claiming independent ownership. “However, any copyright claim can be challenged before the appropriate forum, and the registered copyright can be expunged. Registration, per se, therefore cannot deprive one of one’s right to an original work.”

In the West, of course, awareness of such ownership issues is far higher. Yet, even there, a tug-of-war between copyright and derivation persists, which is natural. I found one such incident in a book on copyright: Free Culture by the American scholar and lawyer Lawrence Lessig (who went on to found Creative Commons).

Lessig cites the example of Walt Disney, applying the term ‘Walt Disney creativity’ to the ‘take, tweak, build upon, transform’ nature of creativity practised by Ganesh sculptors. Writing of Disney’s early days, he argues that the man’s genius could flourish only because the legal atmosphere of the time allowed him to take and rework popular works of art. Disney’s 1928 cartoon Steamboat Willie was a direct parody of Steamboat Bill, Buster Keaton’s film of that same year. Lessig makes the point that this was (and still is) completely legal—taking inspiration from something is part of the creative process. Steamboat Willie saw the debut of a cute mouse that later turned iconic. This unforgettable talking mouse was Disney’s addition to the mix. Whatever the source, Lessig says, Disney ‘ripped creativity from the culture around him, mixed that creativity with his own extraordinary talent, and then burned that mix into the soul of his culture. Rip, mix and burn.’

This is not to equate a humble Ganesh sculptor with Walt Disney, but there is something to the argument that creativity doesn’t occur in isolation. In India, though, the tug-of-war is between copyright and religion. And with such a vast pantheon of Hindu deities, all moulded in myriad ways, there may be no end to the tussle.