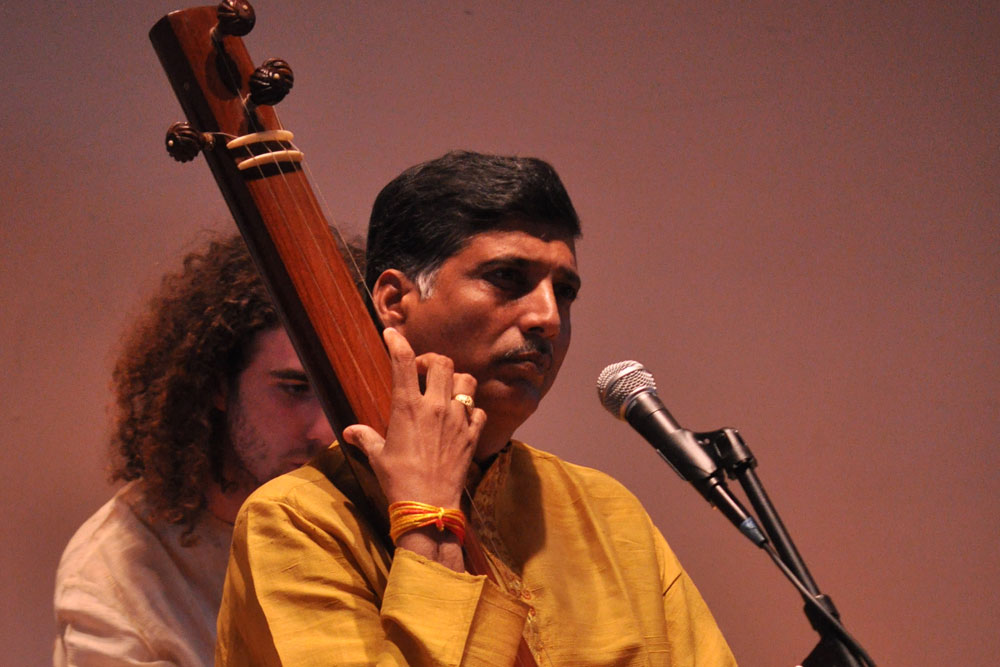 
The death on 8 November of 58-year-old vocalist Ramakant Gundecha, the younger of the two Gundecha Brothers, largely credited with the revival of the ancient musical tradition of dhrupad, has left followers of Hindustani sangeet numbed and devastated. In a concert career of over three decades with elder brother Umakant, Ramakant had come to be known as a creative exponent of the Dagar bani, committed to the supremacy of melody and poetry rather than the pyrotechnics of some other schools.

Exemplars of the syncretism of Indian classical music, especially in the north, the brothers trained in the gurukul of the ustads Zia Mohiuddin Dagar and Zia Fariduddin Dagar. Jetsetters and proselytisers in the mould of Ravi Shankar who took Indian music to the west, they had their musical upbringing in the temple town of Ujjain where they grew up amidst economically modest beginnings. Gurubhai and old friend of the brothers, Uday Bhawalkar, another distinguished dhrupad artist, remembers that when his brother bought a two-wheeler, all three fledgling musicians jettisoned their bicycles to ride triple on the tiny moped for a whole week to make their musical offerings to seven different deities owing specific allegiance to the planetary god of the day. This was in 1981, a while before all of them were admitted to the Dhrupad Kendra of Bhopal as students. Both already had Masters degrees in music, had trained for many years, and held jobs.

In an interview with musician—and arguably the greatest living writer on Hindustani music—Deepak Raja, the brothers said, “Joining the Dhrupad Kendra meant relearning everything from a different perspective, and committing ourselves to dhrupad as a career. Professionally, this was a high-risk decision to take in those days because the Dhrupad revival was yet to begin. We took the decision because it meant greater personal satisfaction to us as musicians.”

During the interview, the brothers stressed the contribution of the melodic facets of the Dagar style, subordinating the role of percussion, to dhrupad’s aesthetic appeal. This could be seen in their concerts, especially in the first half of their career, with Ramakant’s creativity taking flight, and Umakant providing majestic anchoring with his vibrant voice. Dhrupad scholar Sumitra Ranganathan says, “Their balance reminds me a bit of Rajan and Sajan Mishra—Rajan has musicality no doubt, but he gives the solid substantive vocal line, whereas Sajan sings these incredibly flowing and intricate taans. This may not be an exact analogy, but in a pair, this tends to happen. Even between Aminuddin and Moinuddin Dagar, the heavier voice of Aminuddin held the alap together whereas the more flexible and mellifluous Moinuddin would take off in imaginative flights of jod and fast nom tom alap.”

Over the last decade or so, however, the traditional complementarity of the twin voices in typical jugalbandi style seems to have given way to experiments in harmony.

The Gundecha siblings sang before MS Subbulakshmi in 1989, when she received the Kalidas Samman and impressed her with their ringing voices and the promise of their musicianship. When they came to Chennai not long afterwards for a morning concert at AIR Madras, a visit to the MS residence was an important port of call, something they treated like an act of pilgrimage. My wife who met them at Bhopal, had been bowled over by their music, and I ended up chauffeuring them and their cousin Akhilesh Gundecha the pakhawaj artist that morning. Their reverence for MS was even more in evidence when they sang for a private audience at her home years after they had become famous. Present there, I was shocked and disappointed by their feeble voices that afternoon—the Dagar school of dhrupad is famous for its unique voice culture practices, and the Gundecha brothers had been living proof of them. I started wondering if their music had already started declining. Imagine my relief when they explained that full blown vocalisation in that intimate setting would have been disrespectful to such a senior musician as ‘MS Amma’. Their love of Subbulakshmi’s singing combined with their devotion to Siva found magnificent expression when they presented in a Chennai performance the ragamalika rendering of the sloka Nagendra haraya that MS had made famous in her concerts.

Eminent musician and teacher Falguni Mitra of the Betia gharana of dhrupad told me, “The Gundecha Brothers have given their best in serving this lofty music. Through transformations in the genre, they have made dhrupad accessible to a wide variety of listeners and learners across the globe, and absorbed new instruments into the genre as well.” The more articulate Ramakant was perhaps the architect of many of these initiatives, stressing as he did his belief in the vedic origins of Dhrupad, something that attracted western audiences to it. Many consider Ramakant an intellectual who thought deeply about the art and science of his music, but was also keenly aware of the part promotion plays in a musician’s career; hence he took the lead in collaborative efforts to reach out to wider audiences.

If their jugalbandis with the Malladi Brothers worked well for both the duos, the connection with the south was strengthened by their association with the late Chandralekha’s dance centre and her followers at Chennai. The brothers also performed the songs of the great 18th century south Indian composer Muthuswami Dikshitar who spent years in Varanasi, and inspired by dhrupad, created such exquisite compositions as Ardhanariswaram, Parimala Ranganatham, Jambupate and Akhilandeswari. The brothers’ Dikshitar concerts were a product of their collaboration with US-based Kanniks Kannikeswaran, a musician, composer and Dikshitar researcher of repute.

It was the brothers’ conviction that audiences want to listen to good classical music, not specifically khayal or dhrupad. “If we have been able to find a place in the major events of Hindustani music, it is because we are musicians of acceptable quality,” they told Deepak Raja. “The fact that we perform a genre that is not very widely practised or heard, is an additional, but marginal, consideration.”

Proud of their training with Zia Mohiuddin and Zia Fariduddin Dagar, they described them as the most successful teachers of dhrupad, teachers who produced many successful concert performers.

The brothers were excellent teachers, too, much loved by their students, both at the Dhrupad Sansthan they founded at Bhopal, and worldwide, prominently in the US. According to Shuchita Rao, a musician based in Boston, Ramakant was a selfless karma yogi with a vision to educate people about dhrupad; both a thinker and a doer, he succeeded, along with his brother, to create a deep interest in dhrupad in America and many other parts of the world.

Ramakant Gundecha will be remembered as one half of a successful duo synonymous with the Dagar style of dhrupad. He will go down in history as one of those who brought dhrupad out of relative oblivion when khayal was the only Hindustani music that many listeners knew.

And what of the future for his elder brother Umakant? How does a musician, however accomplished, cope with the loss of his lifelong partner, especially if he was a brother? How do you make the adjustments necessary to continue performing solo, without the reassuring presence of a voice that complements, enhances, even covers up, on the rare days you are off colour or unwell? It must have been a familiar scenario among duos through the centuries, but in this particular instance, it has occurred when the surviving partner still has years of music ahead of him. Friends and admirers will be anxious for Umakant Gundecha in his hour of sorrow.