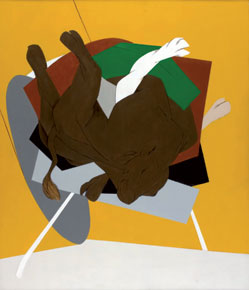 It is perhaps only in translation that the local, organic inflections underlying the occidental term, ‘market’ are revealed. In fact, the very word ‘market’ is a misnomer in a country as ancient as India, whose cultural heritage dates back several millennia, whose cartography was punctuated for centuries by ancient trade routes, and whose bustling stock market—Asia’s oldest—traces back to 1855, when a bunch of five brokers began trading under a banyan tree in British colonial Bombay. The Persian-origin ‘bazaar’ is possibly more accommodating of the chaotic, informal and sometimes superstitious mechanisms that orchestrate the commercial enterprises contained within its ecosystem. To describe the dealings that transpire when works of art change hands within the Indian artist-gallerist-collector-auction house- collector nexus as the ‘Indian art market’ is to obfuscate its resilient, resistant, multi-cellular, regenerative character that may have had its formal beginnings as a consequence of the country’s liberalisation policy of 1991, but has, in some sense, perpetually persisted on the fringes of the larger economy, and has survived and even resurrected itself despite the lack of infrastructural support and restrictive, outdated laws.

After almost six comatose years, during which the necessary process of price recalibration has been underway, a concerted, collective attempt to never again succumb to the careless speculation that resulted in the deathly thud of the 2008 crash — the Indian art market finally displayed symptoms of resurrection on 19 December, 2013, with Christie’s inaugural auction on Indian soil, at Mumbai’s Taj Mahal, when an untitled non-representational painting by VS Gaitonde sold for a historic Rs 23.7 crore ($3.8 million) to a US-based collector in anticipation of a planned retrospective of the late artist’s works at the Guggenheim, New York, in October 2014. ‘This auction feels like an adrenaline shot into the heart of the art market,’ art critic Girish Shahane had posted on Facebook soon after the sale, which had attracted buyers across Asia, America and Europe, and grossed a total of Rs 96,59,37,500 ($15.4 million), doubling pre-sale estimates, with 98 per cent of the lots sold.

The high from the secondary market was pervasive, feeding the cautious optimism of the 2014 edition of the India Art Fair and sustaining the market through the following months. Mid 2014, confidence in the market surged to 74, its highest reading since October 2007, jumping 41.9 per cent from the last reading in November 2013, according to the ArtTactic Indian Art Market Confidence Indicator, a possible consequence of the swearing in of a new central government and a projected growth rate of 5.4 per cent.

One year later Christie’s has returned with its second auction on Indian soil, slated for 11 December, at the same venue as its inaugural sale. The enthusiasm is palpable. The timing couldn’t be better; one day later the international art world will descend on the quaint town of Fort Kochi for the second installment of India’s very first Biennale, curated by Jitish Kallat, featuring 94 artists from around the world. Logistical frenzy aside, the Kochi Biennale Foundation team is currently soliciting donations from school children to the art cognoscenti to Bollywood superstars, and strangely enough, the response has been unprecedented. The catalytic effect of crowd-funding initiatives like this and those planned by other not-for-profit organisations like the Delhi-based artist residency, Khoj, and the Mumbai- based Mumbai Art Room is that they cumulatively highlight the significant need for support from the private sector and individuals in order to sustain the art economy. Christie’s kicks off its second auction within this new climate of freshly infused frenzy and cautious optimism, which has learnt from the mistakes it made that led to the 2008 slump. “The Kochi- Muziris Biennale is due to open shortly and the successful India Art Fair held earlier this year are all indicators that this market is finding a new momentum,” says Amin Jaffer, head of Asian Art, Christie’s.

Following last year’s record-breaking sale, among the star lots is a brilliant untitled 55-by-40-inch work by VS Gaitonde, painted in 1998, making it one of a small handful made by the abstract artist before his death in 2001. This meditative piece, executed in languorous hues of green, and quartered in the centre by intersecting tantric symbols, is being auctioned for the first time on behalf of its owner, a private collector, and is estimated to fetch between Rs 5,50,00,000 to Rs 7,00,00,000 ($896,500 to $1,141,000).

The sale of the lot coincides with ‘Painting as Process, Painting as Life’, the ongoing Gaitonde retrospective at the Guggenheim in New York, which, among numerous other examples, is revealing of the West’s growing interest in Indian Modernist art, which is certainly fuelling sales, according to Jaffer. Alongside the Gaitonde show in New York, the Victoria & Albert Museum in London staged an exhibition of late works by Husain from Usha Mittal’s collection, Jaffer says. “Add to these the activities of the many galleries, collectors and institutions, who, alongside the auction houses are working together to provide a nurturing environment in which the market can flourish.”

The 80 lots on sale are representative of the important art movements synonymous with the country’s Modernist legacy and include some exceptional works by its pioneering practitioners. “When selecting works for the sale we do try to represent all of the key artistic movements and those artists that are always most admired,” says Sonal Singh, head of Christie’s Mumbai department. “It can take many years to consign a work and we are always happy to wait—ours is a long- term business where relationships with clients are critical.” The process is fairly long-drawn, says Singh. “Once we have seen a work and decided that it would be a good piece to include in the sale, the job of researching begins. It can take many months to properly research the history of the piece, checking on the provenance, seeking advice from external specialists on the work of the artist, convening opinion from colleagues … all of these aspects are critical as we have to provide ourselves with the reassurances we need that a work is genuine, before we accept it for sale.”

A pocketbook with the initials ‘RN Tagore’ is another unique lot. Maintained in Bengali between 1889 and 1904, the journal comprises the Nobel Laureate’s poetry, drawings, and introspective musings as well as records of land transactions and taxations, and was given to Tagore by Subodh Chandra Mazumder, a teacher at Santiniketan. This historic pocketbook, which birthed poems from his ‘Sonar Tari’ (Golden Boat) series and 19 poems from the ‘Swaran’ series, is estimated at Rs 40,00,000 to Rs 60,00,000 ($65,200 to $97,800).

Christie’s is certain its second auction will attract both existing clientele as well as new buyers, a category it feels has been consistently growing. “The first sale in India attracted an even greater number, with 35 per cent of those who bought with us new to Christie’s,” says Sanjay Sharma, Christie’s Managing Director in India. “Over 2,000 people joined us during our first sale and previews in India in 2013. In the past three years, the Indian buying spend at Christie’s across all categories in all salerooms has increased by 85 per cent.” These ground realities have prompted the international auction house to set up a second office in New Delhi. “We have made a significant investment in our business here in India, and these two statistics are an indication that this was a wise decision,” Sharma says.

Quiet optimism is how Jaffer describes the mood in-house. “We have just closed the New Delhi exhibition of highlights from our second sale and have been greatly encouraged by the reaction from our collectors,” he says. Propelling this enthusiasm is the emerging awareness of art as more than just capital. “I very rarely hear my clients talk about buying art as an investment, says Singh. “Collectors buy because a work of art has a deep meaning to them, and, in my experience, this is the essence of why people buy art wherever you are.”

(Rosalyn D ’Mello, former editor-in-chief of Blouin ArtInfo India, is a Delhi-based freelance writer. Christie’s The India Sale is on 11 December 2014 in Mumbai)