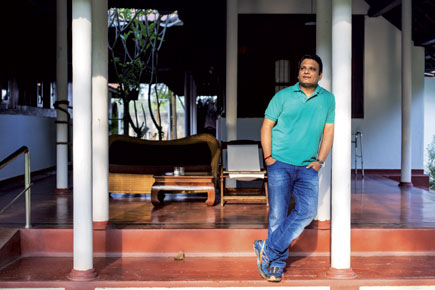 Before he heads to the 68th edition of the prestigious Cannes Film Festival on the French Riviera, where his fourth production, Masaan (co-produced along with Macassar Productions, Phantom Films, Sikhya Entertainment, Arte France Cinema and Pathé Productions), will be screened as part of the ‘Un Certain Regard’ section, Manish Mundra is taking a two-week-long detox break at an ayurveda centre in Bangalore to ring in his 42nd birthday by himself.

While there, he has received a script by email—he had made his address public a few months ago for precisely this purpose—from an aspiring Indian writer-director he’s not familiar with. In spite of his hectic schedule of meditation, yoga and ayurveda sessions, Mundra has found time to read the script and says he was ‘swallowed’ by it on his very first read. “It’s such a wonderful story that it made me cry,” says the soft-spoken Mundra. “I wrote back to the writer to come meet me in Bangalore. He’s coming tomorrow, and I’m making his film.”

That’s all it takes for Mundra, producer of last year’s acclaimed indie film Ankhon Dekhi, which was directed by Rajat Kapoor and screened as the opener of the Mosaic International South Asian Film Festival in August, to pick a film: an evocative script. There has been no method or formula or returns-based calculation that has led Mundra to wholly fund five films till completion so far. “If a script connects and lingers with me after I’ve read it; if it’s a film set in reality and depicts human behaviour and relationships in a way that you and I can relate to, because hamare saath bhi aisa hua hai, ya ho sakta hai (it has happened with us or could happen), then it’s a good film according to me, and I decide to make it,” Mundra says. “It’s not a science for me, it’s instinct.”

It’s a remarkable instinct, given that Mundra, until a couple of years ago, had no connection with the Indian film industry. The CEO of a Nigeria-based petrochem company that he built ground-up, he has made picks with such finesse that four of the projects he’s backed have either made it to or won a prize at a major international film festival last year.

In the case of Ankhon Dekhi, his instinct was stirred by a tweet by Rajat Kapoor. The story is already the stuff of legend among India’s indie filmmakers. Actor-director Kapoor was looking for money to finance his fifth film but was headed nowhere. Letting out his frustration on Twitter, where he had around 150,000 followers, Kapoor lashed out against ‘Bollywood’ and said he was putting his script on the backburner and returning to theatre for a while. Mundra, who was among his Twitter followers, tweeted back saying that he was a fan and would like to produce the film. After a brief but rather funny back-and-forth, where Kapoor was initially hesitant suspecting some sort of a hoax (Nigeria’s reputation being of no help), Mundra flew to Mumbai, signed a six-page agreement with Kapoor, transferred a chunk of the film’s Rs 9 crore-odd budget to the latter’s account, and went back.

For Mundra, it was less an investment than a need to put his money where his heart is: in the creation of cinema, his first love. “It’s all a plan of God,” smiles Mundra, “so if not for Rajat’s tweet, some other tweet would have happened. My objective of joining Twitter was to be connected with filmmakers and to get into films.”

For as long as he can remember, Mundra has been obsessed with the medium. Growing up in the era of the 80s’ potboilers with the likes of Amitabh Bachchan, Shatrughan Sinha and Mithun Chakraborty, he says he “lived movies”. “Watching a movie on the big screen was the ultimate experience for us at that time,” he reminisces. “Films of the 80s made you feel like the hero. You didn’t just want to be besides Amitabh Bachchan on the big screen, you felt that you were Amitabh Bachchan; you were Vijay. You lived like Vijay and even talked like Vijay,” he says, doing his take of Bachchan’s baritone. “I don’t think I ever missed any Amitabh film after I passed class 10. And I was motivated by that euphoria to make it in life. The idea of people knowing you, clapping for you, and saying that you’ve done something big, was the charge I needed to be successful.”

It’s no coincidence that Mundra’s life trajectory appears to trace Vijay’s. At the time of his birth, his father was a successful businessman, but he lost his money to ill-fortune and some missteps, leaving the family in a bad way. Inspired by the Bachchan character on screen, the young Mundra badly wanted to be a ‘somebody’. “There was a time when we would struggle for food and I spent sleepless nights crying and wondering why I was poor. From class 9, I began earning for my family. In the mornings, I would go to school, and in the evenings, I would sell soft drinks at a roadside stall. During [college], I sold curd for two years and did various other odd jobs too. I wanted to do an MBA when others were doing IPS and IAS so I could become a CEO by 32, so I could earn enough by 40 to leave the business world and join films somehow. By God’s grace, by 32, I was a CEO, and by 40, I produced a film. You don’t want to die rich, you want to die satisfied. And that’s what drives me.”

Mundra, who runs a non-profit school in Jodhpur that provides free education to over 250 students every year, is now writing a book based on his life. “If you can dream it, you can achieve it,” he says. But before he helps shape the dreams of others, he finds himself motivated by a larger vision: to help Indian indie filmmakers sustain themselves as they deliver quality cinema content. To that end, he has set up a company, Drishyam Films, which focuses exclusively on the curation, production and distribution of independent films. Mundra has set the ball rolling by appointing industry veteran Srinivasan Narayanan, outgoing director of the Mumbai Film Festival, as its chief mentor, and the dynamic Shiladitya Bora, who until recently ran the indie distribution outfit PVR Director's Rare, as its CEO. An office has been opened in Mumbai, and a team of cinephiles is busy with a set of specific tasks at hand: to focus on international film festivals; to ramp up the digital, social media and publicity arm; and to develop the line production outfit. The ultimate aim: “To create a platform where fresh, new talent with the courage to say ‘I can make a film’ can actually be given the resources to make it.” Frivolous films would get no quarter. “When you look back, even mainstream films of the 80s had realism,” says Mundra. “But around the 2000s, we deviated majorly and now we only care about making money. Apart from Marathi cinema, no other Indian cinema has managed to create a space for parallel cinema to exist or prosper in the last 20 years.”

Mundra has a solution. His approach is all heart, but he explains it in business terms: “As I see it, for an indie film to do well, it only needs an audience of around 300,000 people in the first three days, which is not a huge target. To get that audience, we’ll have to do something called ‘market seeding’. The idea is that without working backward from the point of view of turnover or profit margin, at this time, we only need to invest in films with good content and good stories. The investment must include money for promotion and social media, so that awareness is created and an audience is cultivated over 15 such films over the next 3-4 years.”

That, in short, is Drishyam’s plan. “I will invest as much money as needed in seeding good films, and then hopefully, if we have two more years like this, where our films circle big international film festivals, and in India, we are able to get the films across to [larger] audiences, in four years we will have enough traction to invite more investment and—more importantly— more filmmakers.” Since Drishyam has only just begun, Mundra has also struck a partnership with Sundance Institute’s Screenwriter’s Lab and invested over Rs 1 crore in Drishyam-Sundance Screenwriters Lab, which aims to curate scripts and mentor aspiring screenwriters, with Mundra’s production outfit picking up the best scripts to produce. Next on the agenda are offices in Europe and America with the goal of attracting co-producers across the world. Mundra also plans to produce films in the Middle East and Europe, and to create new channels for exhibition and distribution too.

“We are not looking for profits and that’s what makes us unique. Our philosophy is only to make good films, and I’m committing money to see them through to their release. Masaan cost Rs 3 crore to make, but I’ve put in Rs 5 crore so I can release it myself and not be dependent on anyone else. Whoever wants to join in is welcome, because I don’t want to be the Amitabh Bachchan or the lone Vijay in this case. I want to be Naseeruddin Shah and join hands with everyone to create a prosperous independent film industry.”

Having already put his vision into action, this year will see the release of all four of Mundra’s upcoming films, with Masaan slated for a June release, followed by Dhanak, Umrika and X-The Film. There’s also Anu Menon’s Waiting, starring the same Naseeruddin Shah who Mundra speaks so highly of, and four other films in various stages of pre-production. Ask him if his next aim is to work with his idol Bachchan, and Mundra chuckles and wistfully says that it will happen when an apt script comes along. “But for now, the next aim is to bring home an Oscar for India,” he smiles. “It’s high time.”